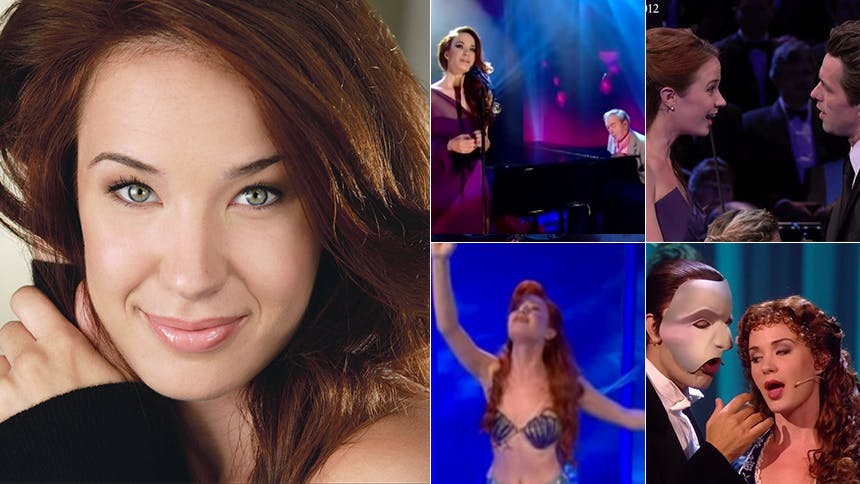 , she's going to rock out with Julian Ovenden and the New York Pops at Carnegie Hall. The pair headlines the Pops' season opener on October 9 titled My Favorite Things: The Songs of Rodgers and Hammerstein. It's a major event for fans, clearly—so BroadwayBox figured before a fresh batch of YouTube videos hits the web, let's have Sierra look back on six of her most legendary, fan-favorite clips.

“Part Of Your World”, The Little Mermaid on The Today Show, 2007


Oh that was my first time on live TV! It was so early, I was so excited and nervous at the same time, and luckily had no idea what to expect so I just was taking it all in. I remember it started hitting me that I was on live TV right at the end of the song and then I looked up to sing the last “part of that….” And I saw the word “today” and I thought YES! That is it! We only have this present moment, NOW, TODAY! And I locked my eyes on that word and sent the energy of “world” straight to that!

“Wishing You Were Somehow Here Again”, The Phantom of the Opera 25th Anniversary, 2011

So to this date this is one of my favorite artistic experiences of my entire life. This particular moment within the show was so personal and intense for me. I remember knowing that we were being broadcast live around the world and that I needed to play this part as if my life depended on it. I wanted to honor Andrew Lloyd Webber and Hal Prince and Gillian Lynne with every fiber of my being. And also honor the character of Christine. This particular song, that night, I felt the responsibility of living the story of the song, and by the end of it, having the ovation that it received I didn’t know what to do. I was so emotionally exhausted from the journey of the song, and to receive that kind of response was truly overwhelming. When I see this clip I don’t even feel like I am watching myself, it feels very out of body.


This was in London, and we came in early in the morning to film actually since I had to do a show the night it was on. So they actually super-imposed us into the show that evening! Which is so cool that they could do that. So that morning it was just Andrew and I and Louise Hunt playing the other piano, and we got all dressed up and played it through a couple of times and that was it. It was really the simplest performance ever! I remember that when I sang this song it was the first time I really understood the JOY of love. We were still in rehearsal during this time and I was still focusing on the sadness of love and the heartbreak. That morning singing I finally understood the love of love! Ha!


Oh I loved this so much. Julian Ovenden is one of my favorite people to sing with. He’s such a dream! This was the second Proms I did with the John Wilson orchestra, and I remember when they sent me the songlist and I saw this was one of the songs I would get to sing I was so excited. Before we went out to sing this, Julian and I looked at each other and had a moment of “this is such a responsibility to the Bernstein legacy, we have to just LIVE in it!” We just went out there and lived in the most incredible score ever. I mean it really felt like a gift to get to sing this with a 90-piece orchestra on the stage of Royal Albert Hall.

“The Phantom of the Opera" with Ramin Karimloo at The Classic Brit Awards, 2012


One of my favorite things about this is that I had just finished singing “Wishing You Were Somehow Here Again” and then went directly into this. Therefore I was in the costume that is never worn during THIS song! All the Phantom fans know what I mean. We all sort of loved that Christine gets to wear actual clothes for this! HA! The other thing is you can hear me trying to get my voice to the low range at the start of the song because I just finished singing in my upper register. But this particular performance was awesome because Ramin and I got to reunite for the first time since we had done the 25th Anniversary performance. It was stepping back onto the stage where we felt like we had left our hearts and artistic souls.


Oh yes, this is me. This is during Summer Stock at The Little Theatre On The Square in 2004 right before I moved to NYC! This is the show that gave me my equity card! I loved playing this part and that is one of my dearest friends, Nick Dalton, playing Guido! And I still have that slip I am wearing. It was from Victoria’s Secret and I think it was the first lingerie I ever owned. Haha! Oh man I would love to do this show again!!