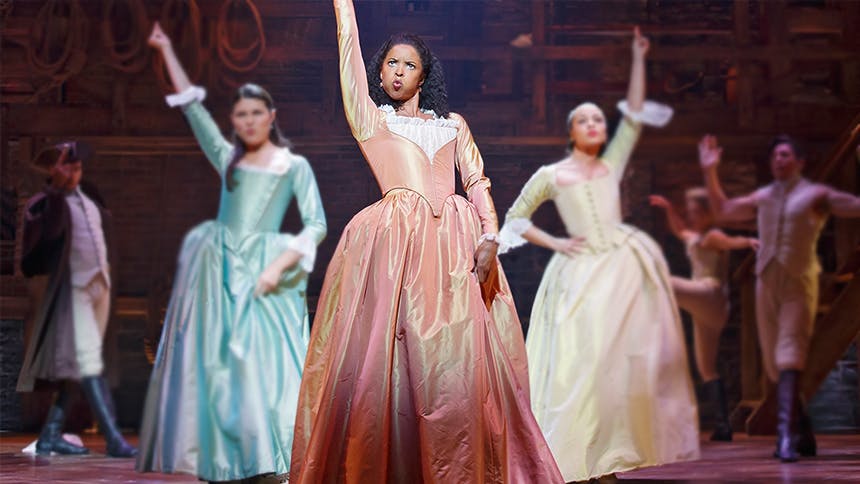 This season is Renée Elise Goldsberry’s for the taking. She has the best number in the hottest musical in town. But before we get to Hamilton

Goldsberry was the final Mimi in Rent and thus appeared in that cherished live film every Renthead owns.


She played LaChanze’s sister Nettie in the original Broadway cast of The Color Purple.


And Lord knows, Goldsberry broke our hearts and gave us so much life (while clearly also giving a glimpse of the Angelica to come) in Encores! I’m Getting My Act Together And Taking It On the Road.


Other credits include Good People at MTC and Shakespeare in the Park’s Two Gentlemen of Verona (award nominations for both). She’s also an Emmy nominee who you’ve seen on screen in One Life to Live, Ally McBeal, The Good Wife and The Following.

So if you’re a person who has a passing acquaintance with Broadway, you (like us) have probably spent weeks now listening to Hamilton, and again, if you’re like us, you are completely taken by REG.

Let’s start with her character’s entrance in “The Schuyler Sisters”. Two moments you need to brace yourself for: “New ideas in the air,” (0:57) and when she starts rapping at 2:15 over the chorus. #Bless

What is there to even say about “Satisfied”? Just listen, and relisten and repeat once more before moving on. But also the acting that’s happening as well. Line readings for daaaayyyss.

Then a bunch of war stuff happens, but Angelica reappears in the Act I finale at 3:28 and it’s so beautiful, sad and haunting. It was well worth the wait.

Early in Act II, you find out that Hamilton (the genius Lin-Manuel Miranda) and her have been corresponding by letters. In one letter he rocks her world with a single comma and it’s everything (2:19). #WithACommaAfterDearest #ButReallyTheWholeSongIsLifeAffirming

Her last major appearance before the big final song is at 1:05 and the shade is real (so are the vocals).