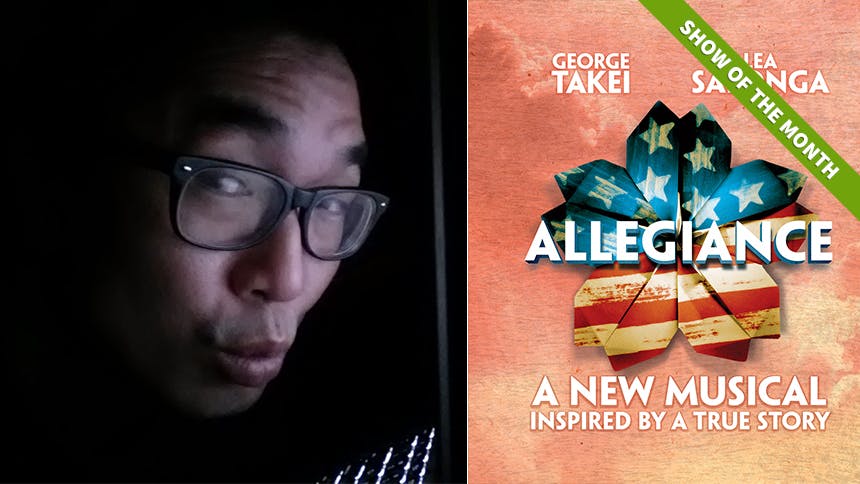 After starring in dozens of plays in California, a viral web series, a TV show, and off-Broadway’s Golden Child & Ballad of Yachiyo, Greg Watanabe makes his Broadway debut as Mike Masaoka in October’s Show of the Month, Allegiance

. The powerful new musical begins its run at Broadway’s Longacre Theatre on October 6, and BroadwayBox kicks off our coverage with a 10-question interview in which we get to know the rising stage and screen star a bit better.

1. If I had to describe my Allegiance character Mike Masaoka in a hashtag, he would be:
#TheyCallMeMosesMasaoka

2. Before friends and family come to Allegiance, I tell them:
“Yes, I will introduce you to George and Lea.”

3. Play or musical that totally hooked me on theatre and performing:
Webster Street Blues by Warren Kubota at the Asian American Theater Company in San Francisco. It was the first time I played a Japanese American on stage; it was a very powerful moment for me.

4. If you are only going to watch one 18 Mighty Mountain Warriors video, it should be:
Hm, tough one… I’m going to say ‘Illegal Immigrants’. It represents our broad comedic, theatrical style, and our politically satirical edge.
Or ‘Filipino Farmworkers’; if you like the Marx Bros. and/or are familiar with Filipino union organizers and their part in the Delano grape strike.
Or ‘Penis Restaurant’ of you like…well, watch the other two.

5. My most cherished memory from my Watch Over Me experience is:
Casper Van Dien, whose character kills dozens of other characters, whispered to me, “This is my favorite death,” right before he stabbed me in the heart.

6. The one thing I miss most about California:
Well, many things…family, girlfriend, Mexican food…. But, surprisingly: driving. Late at night, when the freeway is empty and the summer air is cool and soft. Or cruising to the South Bay beaches around sunset….I guess you can take the boy out of the car…

7. The movie I love so much I know every word to it:
Well, I don’t know every word, but, Casablanca. I don’t know why…but I’d like to think that ultimately, it’s about sacrifice, and taking a stand for justice. (Which I also think is at the heart of our show.)

9. Performance I’ve seen that truly inspires me:
Jeanne Sakata’s Hold These Truths (previously Dawn’s Light: The Journey of Gordon Hirabayashi), a one-man show about man who stood up for his constitutional rights, lost, and was vindicated 40 years later.

10. Three things I have to have in my Allegiance dressing room:
1. Coffee.
2. My script.
3. A hand fan with a picture of George Takei on it.