Editor's Picks: 10 Plays and Musicals You Have to See This October in New York City 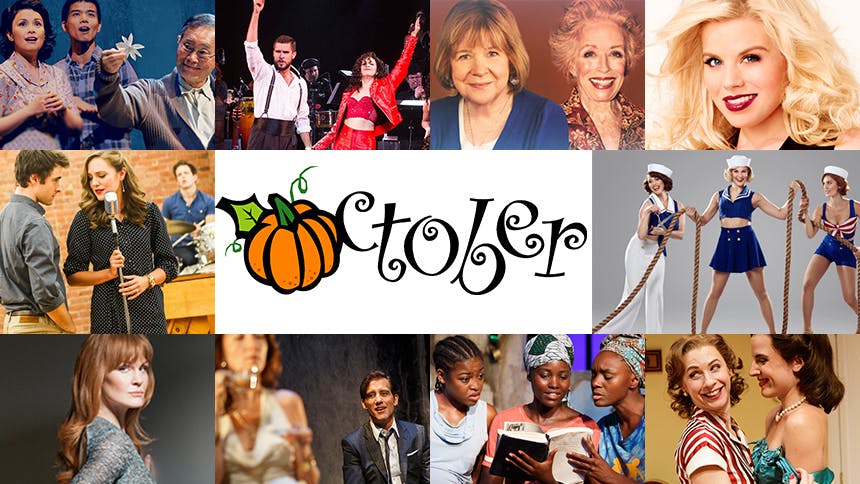 It’s October, so it’s time to watch Hocus Pocus without shame, seriously start narrowing down Halloween costumes and check out these 10 plays and musicals.

1. If you love a musical that will make you cry, keep you engaged, and teach you a little something, run and see the Broadway premiere of Allegiance. The true story shines a spotlight on a time in American history that most people don’t know or talk about, and the musical features the Broadway debut of George Takei, the return of Tony winner Lea Salonga and the first above the title moment for Telly Leung. For all those reasons and more, Allegiance is our October Show of the Month. Previews start at the Longacre Theatre on October 6.


2. Dames at Sea is pure fun. The six-person, tap extravaganza is so special and so sweet, and so worth two hours of your time. Everyone on stage is giving a 110%, and coincidentally that’s also the percentage you’re going to love it leaving the theatre. Now running at the Helen Hayes Theatre.

3. Megan Hilty headlines Encores! one-night-only presentation of Annie Get Your Gun on October 27—aka the night become a puddle on the floor of City Center listening to Hilty’s voice on “Moonshine Lullaby”, “You Can’t Get a Man With a Gun”, “I Got the Sun in the Morning” and “I Got Lost In His Arms”. If it’s anything like her Gentlemen Prefer Blondes, people will still be talking years later.


4. What’s there to say about On Your Feet that Bbox haven’t said or GIFed? The Gloria Estefan music, the award-winning creative team and the cast are all on fleek, and with Rock of Ages & Mamma Mia! closing, On Your Feet is going to be the Broadway destination if you want to have legit/bordering-on-rowdy fun. Previews begin October 5 at the Marquis Theatre.

5. Lauren Pritchard’s Nashville-inspired Seagull adaptation Songbird begins its limited run October 20, and it sounds like it’s going to be out of this world. Also any chance to see Kate Baldwin sing live is worth getting a ticket for. Previews begin October 20 at off-Broadway’s 59E59.


6. RTC’s revival of Old Times is stunning. It’s a total mindf#ck but, by the end of the 70 minutes, it will have you craving a cigarette, a scotch and a British accent. Eve Best, Clive Owen and Kelly Reilly shine in this posh, passionate Pinter drama that hasn’t been seen on Broadway in over 40 years. Now running at American Airlines Theatre.


7. Another RTC play worth checking out this month is The Humans

8. The Public Theater has two shows worth the train ride downtown this October. The first is Michael John LaChiusa’s new musical First Daughter Suite. It stars an all-female cast of Broadway voices you adore exploring the relationships between famed first ladies and their daughters. The second Public show getting big buzz in October is Eclipsed, a drama set amidst the Liberian Civil War and starring Oscar winner Lupita Nyong’o.


9. Remember early in The Golden Girls when they flashed back to all the girls not getting along but having to live together anyway? MTC’s new comedy Ripcord is kind of like that but imagine it written by Pulitzer winner David Lindsay-Abaire, directed by David Hyde Pierce and starring Emmy winner Holland Taylor & Marylouise Burke.

sounds like a hoot: It’s 1950 and two U.S. State Department employees (Bob and Norma) are tasked with identifying sexual deviants within their ranks…except they are both secretly gay and using each other’s partners as beards. Needless to say madcap comedy ensues. Now running at The Duke on 42nd St.

11. Paper Mill Playhouse kicks off its season with the world premiere musical The Bandstand. Corey Cott is back from WWII and looking to make it big with his band; Laura Osnes is an aspiring jazz singer and Beth Leavel is her mama. What more do you need to know before you get on the express train to Jersey? Previews begin October 8, running through November 8.

Paper Mill Playhouse
Best Priced Tickets
Newer
Goofy, Optimistic & Vulnerable: Lisa Howard Lays It All Out in Her 54 Below Set List
Older
School of Rock Star Sierra Boggess Reacts to Six YouTube Videos From Her Past
Sign up for BroadwayBox Discount Alerts