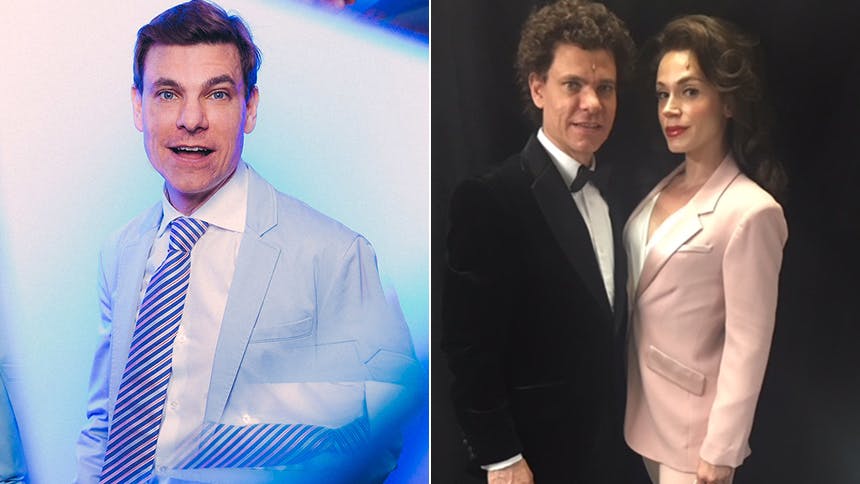 Aaron Krohn co-stars as Neil Bogart (the record producer who made Donna Summer a superstar) and Summer's awful exboyfriend Gunther in the Broadway bio-musical Summer: The Donna Summer Musical

Scroll on as Aaron talks about the wild audiences at Summer, creating music with his band Notes From Underground, and his anime fans.

1. What’s the highlight of Summer the Musical?
Jared Zirilli’s hair.


2. As a performer, can you feel and experience the joy that hearing Donna’s music live gives to Broadway audiences?  What’s it like?
Yes! It’s very fun to be a part of it. “Hot Stuff” and “Last Dance” never fail to bring audiences to their feet. I knew her music was special; crossing into all sorts of tastes and types. She transcends the “disco” genre. But man! People go cuckoo. At first I thought they were just excited about my dancing, but then I found out that they got that excited when I was out on vacation....more even.

3. This is your 10th Broadway show, and your resume ranges from Shakespeare to Stoppard to Cabaret. Which of these has been your most artistically fulfilling Broadway credit to date?
That’s a tough question. A highlight was performing the “marathon” of The Coast of Utopia at Lincoln Center. We did this nine times and always on a Saturday. The Coast of Utopia was three separate plays. But on a “marathon” day we would perform part 1 at 11am, part 2 at 3:30 and part 3 at 8pm. Most of the audience saw all three shows that day. They would have lunch in the area after part 1 and then dinner after part 2. We didn’t do a curtain call after parts 1 or 2 but we did a special call after part 3 reserved for “marathon” days. Sharing that with the 40+ person cast and that faithful, devoted audience was quite moving and special.


4. You’ve done a lot of voiceover and anime work as well. Is there a character anime fans reach out to you about most?
Kaji. It’s a world I don’t know much about. But apparently Evangelion is very “big”.


5. If people were going to listen to one song from your band Notes from Underground as an introduction, which would you suggest?
I’d say “Hope”. Our music has been called “fast melodic, dramatic, punk-pop”. A dear friend described us as “if the early Police & Green Day had a baby and raised her on Dostoevsky & Donne.” “Hope” has the energy, brevity and unexpected snacks that mark many of our songs. We’re playing what we hope to be our 5 song EP release gig at The Bowery Electric on February 11th. Our Facebook page is @NotesfromUndergroundNY.

6. Who were the music artists that really left an impact on you in your teen years?
The Who, The Jam, Game Theory, Elvis Costello, XTC, Jimi Hendrix, Stephen Sondheim, Stephen Schwartz, The Beatles, Stevie Wonder, Pink Floyd and Joe Jackson. Guilty pleasure: Styx.


7. What was the most interesting or informative thing you learned about the late Neil Bogart when building your character?
He was a singer, on a cruise ship. It was fun to learn that he’d been a performer himself. He had a great eye for talent and potential. They called him the “Bubble Gum Kid” because of the pop music he “discovered”. So he had experience as producer and performer.