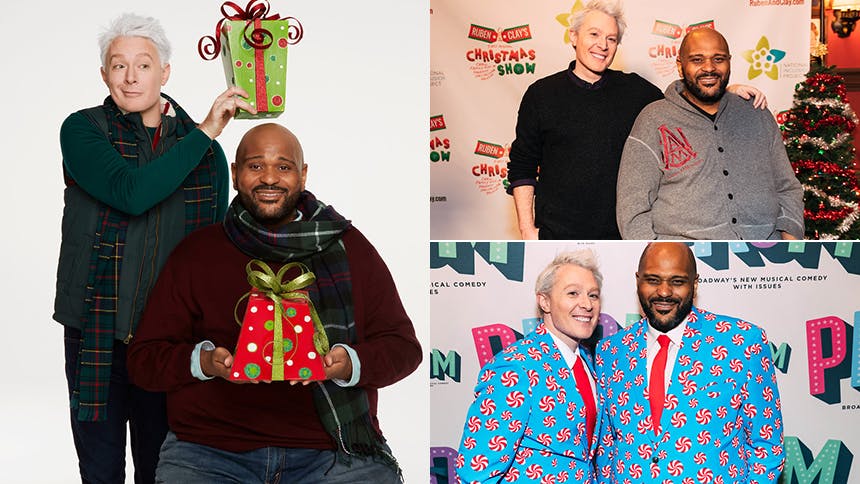 16 years ago come January,Ruben Studdard and Clay Aiken shot to superstardom as the winner and runner-up of American Idol Season 2. Now the boys are back together on Broadway (a debut for Ruben!) this month with their hilarious (and incredibly sung) new holiday concert Ruben & Clay's First Annual Christmas Carol Family Fun Pageant Spectacular Reunion Show


BroadwayBox caught up with the dynamic duo to talk about Christmas traditions, the musical revival they almost co-starred in, and if they would do an Idol all-stars season.

1. What is a Christmas tradition that is important to your family?
Ruben: Honestly, it’s just spending time with family. Over the past couple of years, my family has been trying to go to the beach for holidays. It’s something different, and it took my grandmother awhile to get used to be—but she likes it now. All my cousins, all my aunts, everyone is there. I enjoy it immensely.

Clay: For me, Christmas traditions always end up being a lot of stress and organization. Our family always makes it to this enormous 300-acre field (not too far down from Raleigh, NC) where these people put up a whole bunch of Christmas lights. It’s one family, and they’ve spent hundreds of thousands of dollars on Christmas lights and displays. We always go down there, way out into the country to see the Christmas lights in Meadow, NC.

3. What is your dream revival on Broadway? What show would you love to lead?
Ruben: Fences. It was my first-ever Broadway show. I saw James Earl Jones. I had to be about seven. My Aunt Pauline was the director of a program at Clark Atlanta University called Upward Bound, and they brought all the kids up to New York to see Fences. My Aunt Pauline made sure I was on the bus. She knew I loved music and performing, and she said, ‘I am taking Chris with me!’ It was my first time in New York.
Clay: There was a period of time Ruben and I talked about doing Big River together. I’m way too old for it now. Ruben could probably still pull off Jim, but I think the ship sailed for me. If I could subtract 20 years from my age, that would be the dream.

4. When your fans see you at the stage door, they are going to be super starstruck. When is the last time either of you got starstruck?
Clay: I know yours.
Ruben: Do you?
Clay: Yes, I’ll answer Ruben’s. Ruben always played it cool; he’s very rarely impressed by celebrity. When we were doing Idol, Season 2 was the biggest season yet, and we were lucky that year because Oprah came and did her show from our set. I will remember forever Ruben running down the dressing room hall like a 13-year-old going, “Oprah’s in the building!! Oprah’s down the hall!!”
Ruben: I didn’t do it like that!
Clay: You did it exactly like that! That’s the only time I ever saw you lose your cool.
Ruben: That’s true.
Clay: I get starstruck by very strange people, like Senator Tom Harkin from Iowa. I was very excited about meeting him. Then meeting Diane Sawyer was a big deal for me when I did Good Morning America the first time.

5. I love RuPaul’s Drag Race, and they do Drag Race All Stars every few years and fans go nuts for it. If Idol ever did an all-star season, would either of you participate?
Ruben: I would go and win. Period.
Clay: No, I don’t give a shit.
Ruben: Exactly, he wouldn’t want the embarrassment of losing twice.
Clay: I’ve done that. I lost Idol and Apprentice…and the campaign! [Laughs]