A Roundup of All the Fantastic Disaster! BC/EFA Reunion Performances 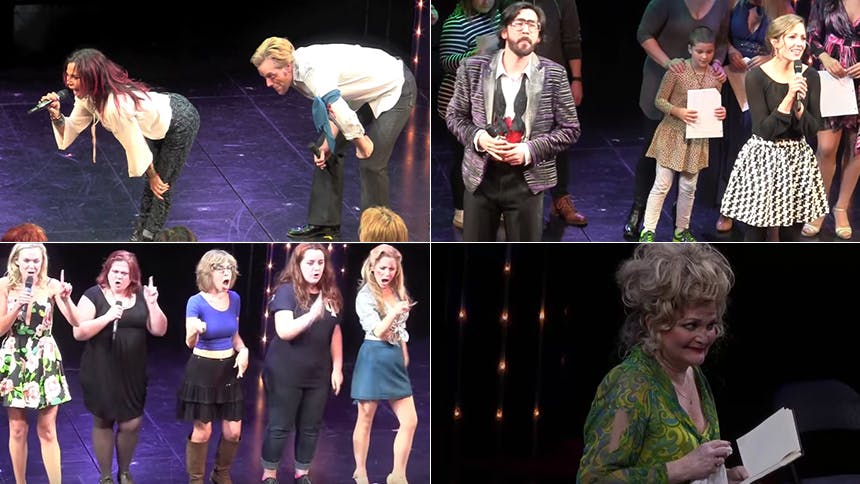 The Nederlander Theatre is more like The Love Boat these days than The Poseidon Adventure, because you never know what B'way celebrity might pop in for a special cameo.

In recent weeks, the encore at the star-studded Broadway musical Disaster!

has been an event all in itself. Broadway reunions abound as former co-stars take the stage to recreate beloved musical moments in order to raise funds for ‪#‎DisasterRelief‬ benefitting Broadway Cares/Equity Fights AIDS. BroadwayBox rounded up all these great fan-bait videos in one place for you to enjoy.

Thanks to special guest Cheyenne Jackson for joining Kerry Butler and Seth Rudetsky on stage last night to perform a song from "Xanadu" as part of our #DisasterRelief efforts to raise funds for Broadway Cares/Equity Fights AIDS! We've got one song before you go tonight, too. You won't want to miss this one! Join us: DisasterMusical.com #PrepareForDisaster

20 years after his breakout role as Roger in "Rent", Adam Pascal sang "One Song Glory" on stage of The Nederlander Theatre last night with two lucky bidders who supported our #DisasterRelief fundraiser for Broadway Cares/Equity Fights AIDS! Who will be on tonight? Only one way to find out: DisasterMusical.com

Faith Prince wowed our audience last night with a performance from her Tony winning role as Adelaide in "Guys and Dolls"! Every night after Disaster - On Broadway we're raising money for Broadway Cares/Equity Fights AIDS with #DisasterRelief. Tonight, catch France Joli singing her hit "Come To Me"! DisasterMusical.com

Disco diva France Joli sang her hit "Come to Me"

Disaster - On Broadway features the biggest hits from the 70s. Last night France Joli joined us on stage after the show to auction off a performance of HER hit song "Come To Me", sung by Lacretta Nicole in the show, for our #DisasterRelief fundraiser to benefit Broadway Cares/Equity Fights AIDS! www.DisasterMusical.com

Posted by Disaster - On Broadway on Wednesday, April 6, 2016

It may have been cold last night, but Max Crumm invited Laura Osnes to bring the Disaster - On Broadway some "Summer Nights" for #DisasterRelief benefitting Broadway Cares/Equity Fights AIDS. Tonight: Rosie O'Donnell in a performance you'll never forget! Join us: DisasterMusical.com

Last night, Rosie O'Donnell joined us for a VERY special #DisasterRelief performance with her own Donald J. Trump version of "There Are Worse Things I Could Do" from Grease! #PrepareForDisaster

Check out the starry new musical Disaster! at the Nederlander Theatre—you never know who might just swing by.

Disaster!
Best Priced Tickets
Newer
10 Soaring Renditions of She Loves Me Showstopper "Vanilla Ice Cream"
Older
Hot Clip of the Day: Alysha Umphress' "Be Good or Be Gone" Slays the House Down at Paper Mill's Pump Boys and Dinettes