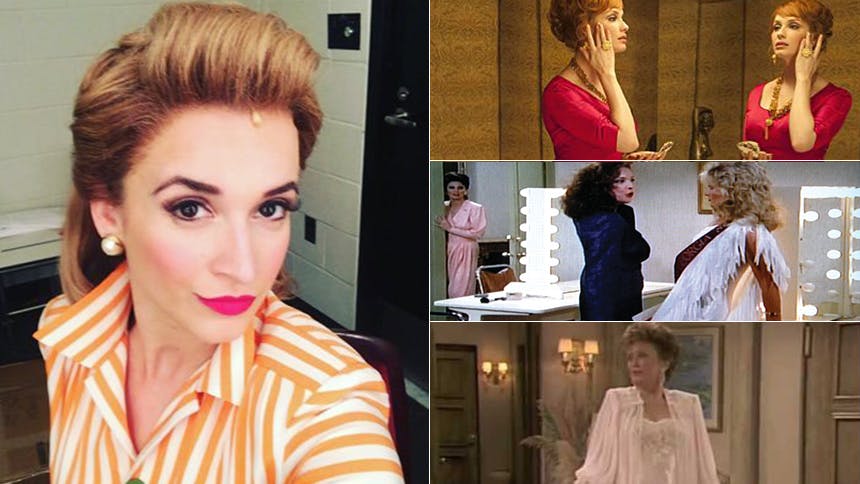 It's nearly impossible to take your eyes off Emily Padgett (former leading lady of the Flashdance tour and Side Show revival) as she slinks around the stage as sultry, Southern, good-time gal Lucy Grant in the hot new musical Bright Star

. Lucy is smart working woman who dreams of one day being a literary censor; she is also a shameless flirt who could drink any man under the table. In her big Act II number "Another Round", Padgett puts those Flashdance skills to work, and the result is astounding.


BroadwayBox caught up with Padgett to find out how she went about creating the memorable and captivating Bright Star vixen, and below she shared with us four of her biggest muses.

I’m originally from North Carolina, so I feel like I knew who ladies like Lucy were. Her power is in her body language. She can be domineering but still be seductive and playful. For me, a lot of it came with the physicality of it—how she moved, how she stood. She is this good-time gal but I wanted her to command the room and have this authority when she walked, so I went back and started looking at episodes of Mad Men and watching the Joan character. Even though she was a woman in that time period and worked in an office, she commanded attention, and it was her stillness and the way she used her body.

To be able to play Lucy at work and at the bar is so great. She is very sexy and she represents the modern woman and this road Billy could take—this modern, grown up way. She’s not pining over anyone; she’s smart and sophisticated; and she makes her own money. She works hard and plays hard. I love physical comedy, and the dancing on top of everything else is such a treat for me. I think it’s so effective representing this is one way Billy could have gone, but it’s not what he’s looking for. I wanted Lucy to be a big contrast from the Margo character.

I’m a big Designing Women fan so there is some Sugarbaker lady going on there, like the episode of when “the lights went out in Georgia”—the authority of Julia there—or when she’s talking on the phone about hunting down Charlene after missing her dinner with the Carters. The thing about women in the South, growing up there, everything is a choice. Before you speak you thought about what you were going to say—and it’s opinionated. ‘This is what I feel, take it or leave it.’

Also, working with Jeff [Blumenkrantz]; we work so well off each other and really created our characters together. I wanted to have a bit of that dry wit he does so well. Walter [Bobbie] did a great job pairing us. I had never met Jeff until we started rehearsal, and we ate lunch together the first day then we ate lunch together every day after that. Before the show, I’ll go see Jeff and chat, and we’ll have a laugh about something. So every performance we are bringing an inside joke on stage to laugh about whatever it may be. There’s always that kind of bubbling.

Then I have some Blanche Devereaux in there too. I think of the way she moved her body and walked in and out of that kitchen and the way she always wore those long, sheer robes and heels. She was my sillier end of where I wanted this character to live. She had a heart of gold but she got herself into some trouble—like the episode where you find out she may have slept with Charlie back in the day.

On the page, there is not a whole lot of text for Lucy, so I wanted to make it as physical a character as I possibly could. It’s interesting that our producer Joey Parnes always tells me, ‘You are not this woman in real life. Who is this person you created?’ But it’s so fun. It really is like playing dress up. I take a lot of time getting ready, and my station is very meticulous and girly. The clothes help a lot. I made sure I wore very form-fitting things to rehearsal and always, always in heels and makeup—because that’s how she lived. In that time period of the ‘40s, those kinds of women did not leave the house without a full face, because that was their identity. Once I slip on the costume, hair, and shoes, it’s her. She’s larger than life and so much fun to play.

Get yourself over to Bright Star at Broadway's Cort Theatre to see Emily Padgett strut her stuff in action.

Bright Star
Best Priced Tickets
Newer
A Guide to Eight Broadway and Off-Broadway Shows Perfect for the Children in Your Life
Older
Hot Clip of the Day: Fasten Your Seatbelts for Keala Settle's "The Impossible Dream" at MCC's Miscast Gala