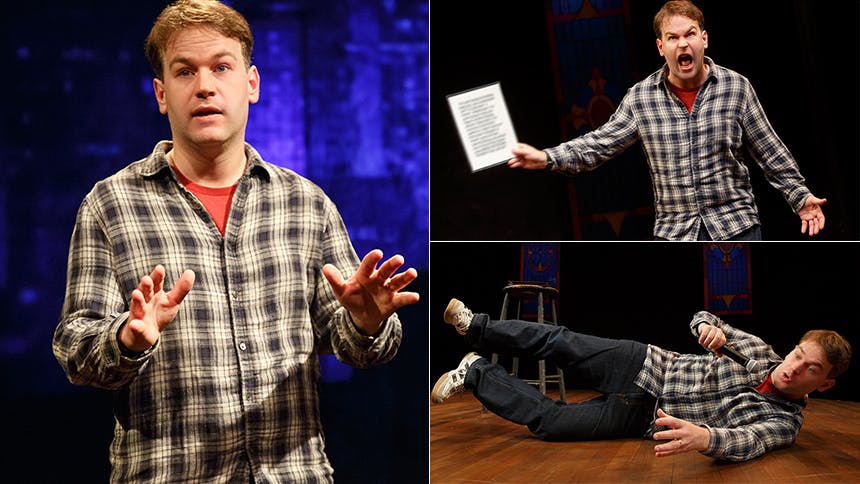 The funniest show in town right now is Mike Birbiglia's 85-minute stand-up Thank God for Jokes—you will laugh until you cry. A regular on late night, Birbiglia is an award winner for his previous solo shows Sleepwalk with Me and My Girlfriend's Boyfriend, and he's memorably appeared on screen in The Fault in Our Stars, Orange Is the New Black, Inside Amy Schumer, and Trainwreck. BroadwayBox caught up with the stage and screen star to hear from him about his top-notch YouTube clips, mean Amy Schumer memories, and theatrical dream project.

1. Who encouraged you most coming up in the comic world, and what piece of advice would you give to an aspiring, young comic starting today?
When I moved to NYC a guy named Lucien Hold ran the Comic Strip Live on the Upper East Side, and he gave me a lot of room to grow. A lot of stage time. And the best piece of advice he gave me was, “Write jokes about yourself. No one can steal those."

2. You have so many hilarious clips on YouTube; but if someone were going to just watch one to get a sense of Mike Birbiglia, which do you recommend?
Aw, thanks! I’d say maybe my Obama story on Jimmy Fallon or my short film with Terry Gross called “Fresh Air 2: 2 Fresh 2 Furious.” That one is insane.

3. Is there a theatrical dream role you’re hiding? Are you like busting to be Harold Hill or in The Pillowman or something?
I always wanted to do Lobby Hero because I love Lonergan’s writing. It was one of the first plays I saw when I moved to NYC.

4. Which of your previous co-stars has made you laugh most on set?
Gosh, well, Amy Schumer killed me on Trainwreck. She was so mean to me (in character) when I played her brother in-law, Tom. She would improvise like 10 minutes at a time of insanely clever and mean jokes about how my character was a loser…to the point where I’d come home to my wife after work and say, “I think…I might be a loser.”

5. Which movie could always make you laugh and which can always make you cry?
Always laugh: Broadcast News. Always cry: Terms of Endearment. But I also laugh and cry in both. Those are my favorite kinds of movies: the “both” movies.

Don't miss Mike Birbiglia in 'Thank God For Jokes' at the Lynn Redgrave Theater at Culture Project through May 29.