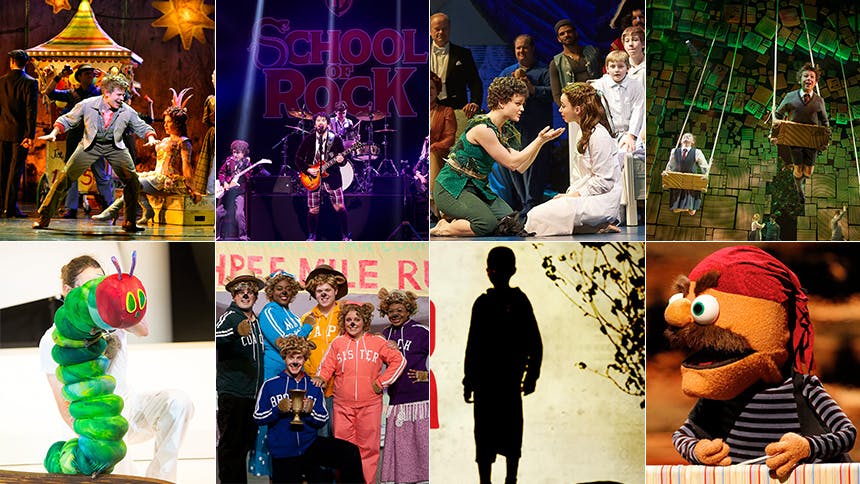 BroadwayBox is here to help take the stress out of searching for a family-friendly show that won’t break the bank (that being said Disney’s Aladdin and The Lion King are awesome). Scroll on as we highlight eight shows perfect for the young theatregoer in your life.


Our April Show of the Month is an entertaining, magical, and beautiful way to explore the topic of life and death with your child. It’s a big Broadway musical so it’s smart and grand enough for an adult and a real game-changer for a mesmerized youngster.
Great for ages 8-80
Run time: 2 hours and 15 minutes (with 1 intermission)
Running at Broadway’s Broadhurst Theatre


The insanely fun crowd-pleaser from Andrew Lloyd Webber and Julian Fellowes is blowing kids’ minds on Broadway. The humor is just right, and the cast of kids playing the instruments is going to make you and your kid want to be in the band.
Great for ages 7+
Run time: 2 hours and 20 minutes (with 1 intermission)
Running at Broadway’s Winter Garden Theatre


This award-winning adaptation of the classic novel is equal parts magical and uplifting. The Trunchbull may temporarily scare the super young ones, but overall the whole family is going to love this British import.
Great for ages 5+
Run time: 2 hours and 40 minutes (with 1 intermission)
Running at Broadway’s Shubert Theatre


If your child is old enough to recognize Peter Pan, Captain Hook, & Tink, they are old enough for this joyous film to stage adaptation about J.M. Barrie and how he created all things Neverland.
Great for ages 7+
Run time: 2 hours and 30 minutes (with 1 intermission)
Running at Broadway’s Lunt-Fontanne Theatre

Jacob Yandura & Rebekah Melocik’s 70-minute musical adaptation of the children’s novel Wringer tells the story of Palmer, a 10-year-old boy who’s about to take part in his town’s annual pigeon shoot until he secretly befriends a pigeon and becomes his biggest ally.
Ages 8+
Running at New York City Center


75 adorable puppets come to life to tell this classic story about a ravenous little insect (and several other short stories by Jonathan Rockefeller) in all under 60 minutes.
Great for ages 1+ (lap seats available for kids under 1)
Running at off-Broadway's 47th Street Theatre


This super-interactive, 60-minute improv show relies on the imaginations of the kids in the audience to help create the ultimate pirate adventure.
Great for ages 4-10
Running at off-Broadway’s NYU Skirball Center

This stage adaptation of The Berenstain Bears series is definitely for the younger kids in your life, who might be too young to enjoy the more sophisticated children’s shows but still want to experience their first live stage show. It’s a great 55-minute way to test the waters.
Great for ages 2-8
Running off-Broadway at Manhattan Movement & Arts Center