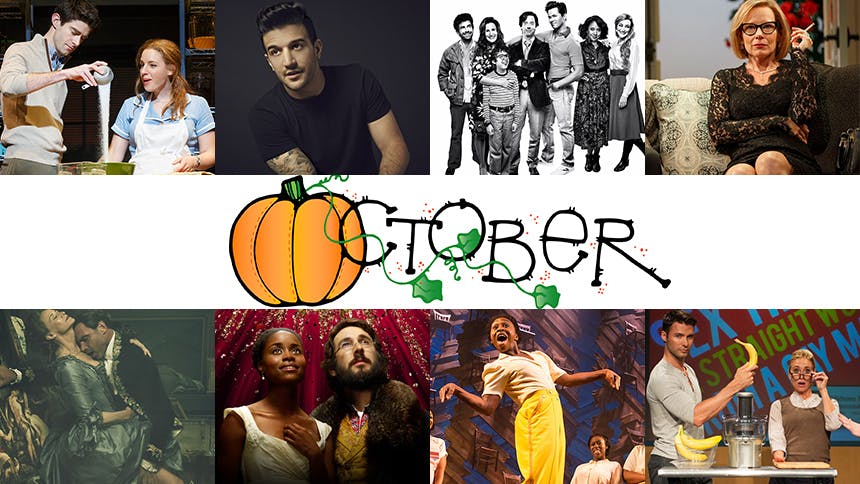 1. Embrace a lovely fall moment with a little pie and an absolutely killer score at Broadway’s Waitress. Jessie Mueller brings it to the next level with her performance as Jenna, a young woman hoping to use her baking talent to escape a bad marriage. It’s one of those rare shows where you’ll actually laugh and cry your way through it.


2. On October 18, Josh Groban and Denee Benton make their Broadway debuts as the title characters of Natasha, Pierre, & the Great Comet of 1812. The immersive musical was a smash hit off-Broadway, and fans can’t wait to see how it’s going to look and feel inside the Imperial. I personally can’t wait to revisit the stunning performances of Amber Gray and Lucas Steele as the musical’s sinister siblings, Helene and Anatole.

3. Dancing with the Stars Emmy nominee Mark Ballas is Broadway’s final Frankie Valli beginning October 18. He makes his Broadway debut singing Jersey Boys hits like “Big Girls Don’t Cry”, “Can’t Take My Eyes Off of You” and “Sherry”. You only have until January 15 to see him live at the August Wilson Theatre.


4. Jennifer Holliday is Shug Avery in The Color Purple

. Yes, the Tony Award-winning Dreamgirls icon and Broadway’s current big-voiced darling Cynthia Erivo share a stage, singing harmonies, and giving fans yet another excuse to go back to the daily church services at the Jacobs Theatre.

. The cast is a dream—I’m still mentally preparing for Tony nominee Stephanie J. Block singing “I’m Breaking Down” and “Holding to the Ground” in one sitting. It’s going to be the musical die-hard theatre fans are talking about this fall.


6. Head down to The Public Theater this month to see two incredibly buzz-worthy plays. First up, the New York premiere of Lynn Nottage’s Sweat, which examines the themes of race, class, family and friendship through the lives of a group of factory workers—and it stars Ms. Miriam Shor, which is worth the price of admission right there. The other hot show at The Public everyone is going to talk about this month is the first NY revival of David Hare's British spy drama Plenty, starring Rachel Weisz and Corey Stoll—but that already is one tough ticket to come by.

. A killer ensemble, including Zoe Kazan and Amy Ryan, takes you on a rollercoaster ride you’ll be telling all your friends about.


8. If you loved how wicked Glenn Close & John Malkovich were in Dangerous Liaisons, or if Sarah Michelle Gellar and Ryan Phillippe turned you on in Cruel Intentions, you must get yourself to the Booth Theatre to see Tony-winning dreamboat Liev Schreiber and the great Olivier & Tony-winning stage actress Janet McTeer ruin some innocent lives in the ultimate play about seduction and revenge, Les Liaisons Dangereuses

9. Harry Potter fans most definitely want to apparate to the new off-Broadway comedy Puffs, or: Seven Increasingly Eventful Years at a Certain School of Magic & Magic. In a world full of Gryffindors and Slytherins, see Hogwarts anew through the eyes of a lovable group of magical misfits that make up Hufflepuff—cause face it, we all have that Hufflepuff friend.

. This is clearly a must-see theatrical event for anyone who knows that Sonja has a taste for luxury and luxury has a taste for her, or that her yacht may have sailed but her ship is coming in, or that sometimes Sonja has to go commando.

Jersey Boys
Discount up to $64