Five Times We Live for Loving Ektor Rivera in On Your Feet! 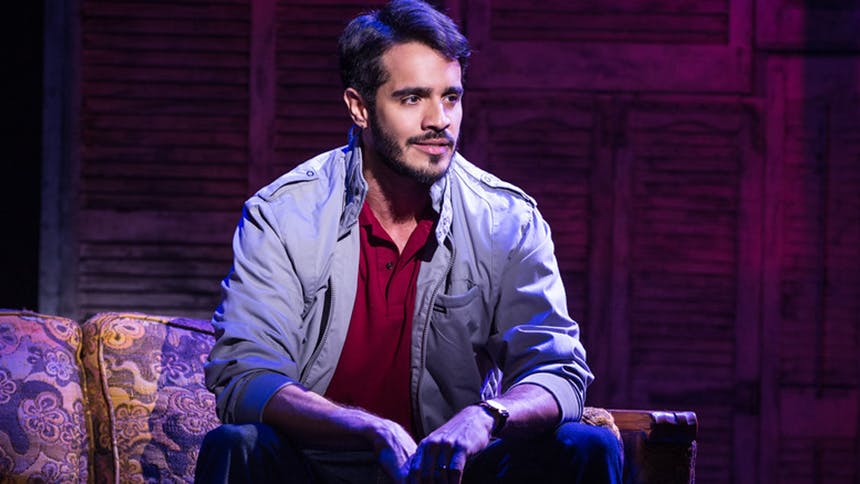 Few people on Broadway were aware of Puerto Rican star Ektor Rivera when he was cast as Emilio Estefan in hit Broadway musical On Your Feet! Before making his New York stage debut, Rivera starred in the musicals Hairspray, High School Musical, Fame, Rent, and Godspell; he competed on the reality shows Q’Viva The Chosen and Objetivo Fama; he released an album; he was the face of JC Penny and Fruit of the Loom; and he appeared on TV, co-hosting his own show, Yo Canto.

Needless to say, it’s no wonder he’s blowing audiences away in his Broadway debut. I recently had the pleasure of seeing Ektor’s Emilio, and here are just five things I absolutely loved about his performance.

His Interactions with Gloria’s Family


Ektor wins over Abuela (and the audience) almost instantly in his first scene in the “terrible” bae-watch shorts. He’s so charming and respectful with the family’s matriarch that you’re immediately rooting for him. Then he brings such layers to his complicated relationship with his mother-in-law. Rather than being indifferent about the riff between them, he plays Emilio’s pain and sadness. The climactic hospital scene is great, but I got seriously emo during their earlier moment in her kitchen where he assures Mama Gloria that no matter what his place is with his wife.


Perhaps it’s in the way he carries himself, but Ektor’s Emilio is seriously in charge. You trust him, and you know he can handle it. This early image of a leader is especially interesting later on as he’s powerless in the hospital then frustrated with Gloria’s reluctance to believe in herself and perform at the AMAs.

This is different than being a leader because that’s about his character and this is about how your eye can’t help but find Ektor in each scene. (And yes, he’s hot AF and his voice sounds like he’s in a boy band, but it’s beyond that.) He’s so animated. At any given moment you can look to him and smile at what he’s doing.

The One-Two Punch of Passion in Act One


After “Mi Terra”, Emilio and Gloria are in a meeting with the label about crossing-over, and he gives an impassioned speech about not changing his name, which ends with, “whether you know it or not, this is what an American looks like.” The crowd goes wild. Then the next scene is this adorable, goofy, and romantic conversation between him and Gloria where he steals a faux birthday kiss from her. By the end, my mind was racing with other musical theatre roles I want to see Ektor play to perfection some day.


The scene in the Madrid airport where Emilio remembers going from Cuba to America was so heartbreaking in its performance that I had chills…legit chills.

Don’t miss seeing Ektor Rivera’s dynamic Broadway debut as Emilio Estefan in ‘On Your Feet!’ at the Marquis Theatre.

On Your Feet
Best Priced Tickets
Newer
Hot Clip of the Day: Croon Your Way Into the Long Weekend with Sam Fazio & "Summer Wind"
Older
Celebrate Mack & Mabel With Five Killer Versions of “Look What Happened to Mabel”
Sign up for BroadwayBox Discount Alerts