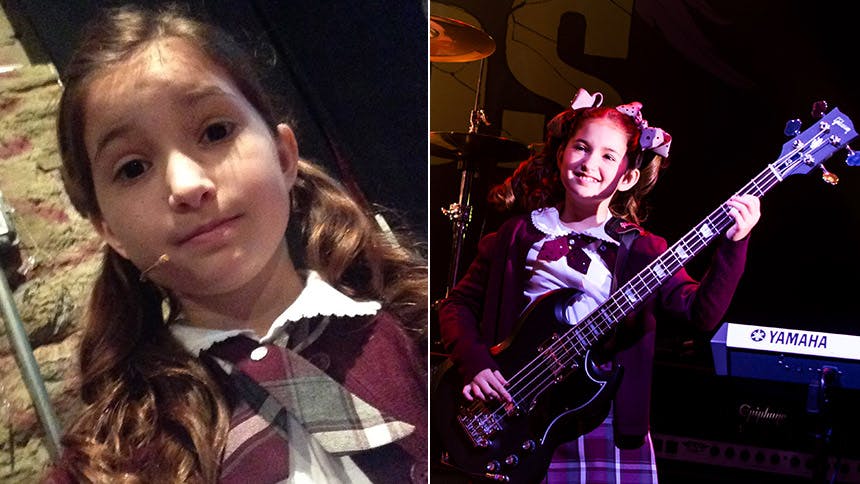 Evie Dolan is the definition of cool as the pigtailed bass player Katie in the hit musical School of Rock.

BroadwayBox caught up with the original Broadway cast member to talk about feeling like a rock god, being inspired by her co-stars, and her backstage prank war.

1. Moment in School of Rock I feel most like a rock god:
I feel most like a rock god at the end of show when the School of Rock band plays in the Battle of the Bands—especially when Brandon Niederauer (Zack) and I get to do our rock moves together and when Alex Brightman (Dewey Finn) introduces me as the “Duchess of Destruction” and I get to play my bass solo.

2. My favorite thing to do backstage at SOR:
Last winter, I loved to knit backstage. Right now we play lots of fun games Zip Zap Zop and Boppity Bop Bop Bop. For a couple of months, Isabella Russo (Summer) and I were in an epic prank battle with Spencer Moses (Ned)—one time we took down all his photographs and replaced them with ones of ourselves!

3. Three things I need for a two-show-day at School of Rock:
A. Starbucks Caramel Frappuccino
B. Comfy sneakers
C. iTunes


4. Moment I knew I wanted to perform:
I started in a musical theater program called Kid City Theater in first grade. I was cast as Annie in the first show we did and I have loved it from that moment on!

5. If I had to rename the School of Rock band, I’d call us:
The Koala Bears! (What else would Katie say??)

6. TV show I love to watch:
Right now, like everyone I know, I am obsessed with Stranger Things and can’t wait for season 2.

7. Most played album on my phone right now:
A mix of Hamilton, Waitress, Bright Star, and Ingrid Michaelson's Lights Out.

8. One thing I’m really passionate about outside of performing:
Can I say 2 things? Feminism and animal rights.

9. In 10 years, I hope to:
I’m not sure yet about what kind of career I want to pursue, but in ten years I hope I am finished with college and am somehow involved in the arts and writing music and playing lots of instruments.

10. As a performer, I am inspired by:
Right now, the people who inspire me the most as a performer are: Andrew Lloyd Webber, Alex Brightman, Sierra Boggess, Carmen Cusack, Hannah Elless, Rachel Bloom, Katy Perry, Tina Fey, Ingrid Michaelson and Stevie Nicks.

Newer
Get Ready for Backstage Shenanigans as Waitress' Jeremy Morse Takes Over Instagram
Older
Hot Clip of the Day: See The Nightmare Before Christmas Come to Life on Stage
Sign up for BroadwayBox Discount Alerts