Meet Your New Crush: Murder For Two’s Brett Ryback on His Geek Files, Vacay with Sexy Celebs & Being #SoBlessed 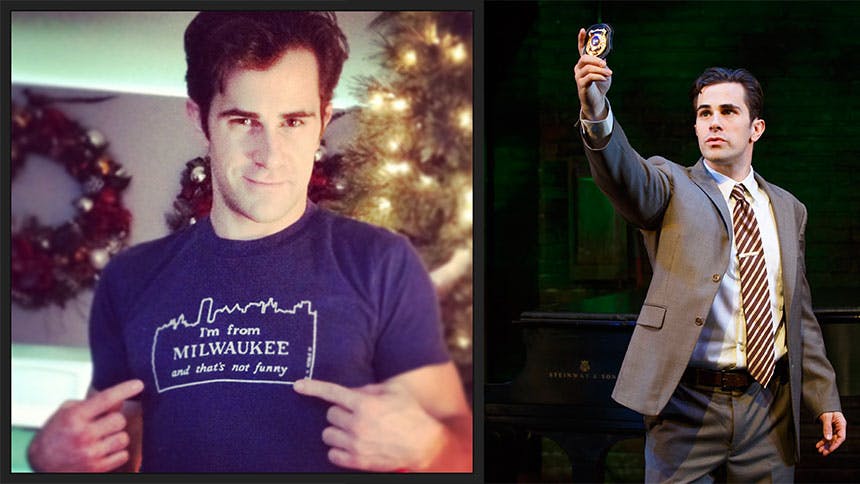 If you have seen the hilarious two-person murder-mystery musical Murder for Two, it’s more than likely that you’ve already formed a crush on Brett Ryback; but if you haven’t, you’re in luck. The absolutely adorable actor/composer agreed to launch BroadwayBox’s new series in which we highlight cute and charming breakout actors (and actresses) from Broadway and off-Broadway. So what are you waiting for?! Get to know Brett Ryback (@btryback) now, then make sure you see him live in Murder for Two

1. My favorite television detective of all-time is
They weren't technically detectives, though they did detective-like work, but I think my favorites are Mulder and Scully from The X-Files. I was a huge fan of the show as a kid, so much so that I actually dressed up as Mulder to go to the premiere of the first movie when it came out. I even had a homemade FBI badge because I was cool and had a lot of time on my hands.

2. My favorite party trick on the piano involves
Playing a game called "In The Style Of." Basically, you take a simple song and then play it in the style of, say, Stephen Sondheim, or Kander and Ebb. It's also fun to do it with film composers like Danny Elfman or John Williams. Alcohol also helps.

3. The musical that makes me emotional every time I see it
Currently that musical is Once. The music in that show combined with the instrumentation packs a major emotional punch from the very first chord. And then you put the story on top of it. I'm gone.

4. The electronic I can’t live without is
My new Macbook Air. But, truth be told, as a composer and playwright, I have a fetish for a very efficient printer that can do double-sided copies.

5. When I was younger, my dream was to be
An actor. Anne Hathaway was right - dreams come true. #soblessed

6. My celebrity crush is
So many. I have big crushes on both Reese Witherspoon and Jake Gyllenhaal (whose name I spelled correctly on the first try, thank you very much.) They dated for a bit, and while they did I happened to see them walk into a coffee shop together in my neighborhood in Brentwood. They were so beautiful. Angels sung from the heavens and I suffered a minor heart attack.

7. My favorite thing to do on my day off is
Stay in my pajamas for as long as possible.

8. The most-played album on my iPod is
I'm always listening to different things depending on what I'm currently composing, writing, or acting. But one album recently has been my go to for chilling at home. It's Josh Pyke's Chimney's Afire. Josh is an Australian artist, and his soft, rich voice and folky songs are absolutely delicious.

9. My favorite snack is
When I'm being good, I love to dip endive spears into any kind of hummus. When I'm being bad, I can't eat enough of Trader Joe's "Cracked Pepper" potato chips—or as they're called in my house "Crack Pepper."

10. My dream vacation would take me to
A villa near a small town in any European countryside. To cook good food and drink great wine, or read a book, or sip coffee and visit with locals all while surrounded by gorgeous vistas would give me such joy and relaxation. Especially if Reese and Jake were there to keep me company.