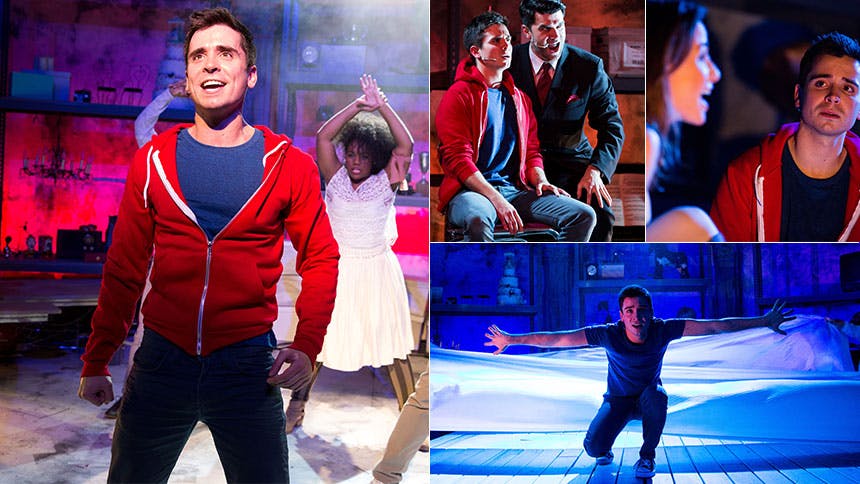 Broadway favorite Matt Doyle stars as the title character in Prospect Theater Company’s Jasper in Deadland. The new off-Broadway musical by Ryan Scott Oliver and Hunter Foster tells the story of 17-year-old swimmer Jasper who must venture into the underworld to save his bff (they are JUST friends) Agnes before it’s too late. Below, we talk to show’s hero about underworld adventures, mythology and the ‘80s monster that still gives him nightmares.

1. Greek/Roman God Who’s Powers I’d Like:
I've always been fascinated with Poseidon. I thought being god of the sea was terrifying and all-powerful. If I were to choose today, I'd say Apollo. Being the god of light, music, and poetry sounds a bit more...comfortable.

2. Greek/Roman God I Would Not Want to Piss Off:
Poseidon! Don't piss him off when you're on a boat.

3. My Three Must-Have Items for a Trip to the Underworld:
My iPod/music, because it apparently charms a three headed dog down there. Some hiking gear, because I feel like there's gotta be some rough terrain. And a sword. I know a gun or a modern weapon of some sort would probably be better, but a sword sounds appropriately bad-ass.

4. Monster That Scared Me the Most Growing Up:
Easy. The Nothing in The NeverEnding Story. It scared the crap out of me. As a kid, the concept of everything falling into an empty, lifeless, abyss, was too much for me to handle. I had horrible nightmares. As an adult, I realized that black holes are basically The Nothing. So The Nothing is real. Yep. So I still have nightmares.


5. Monster I Actually Think I Could Take in a Fight:
A three headed dog like Cerberus. I've got two dogs at home, and one of them is quite the little monster herself. Dogs don't scare me. Even if they have three heads.

6. Ryan Scott Oliver Song I Find Myself Constantly Singing in Day-to-Day Life:
Stroke by Stroke from Jasper in Deadland! It's one of the best songs he's ever written (which is saying a lot) and it's so unbelievably catchy. I cannot get it out of my head after the show.


7. The Most Exciting Thing My 17-Year-Old Self Did Was:
When I was 17, I did the Tisch Summer High program before my senior year of high school. It was my first time on my own in New York City. I met some incredible people (including Alex Brightman!) and saw some amazing shows. I grew a lot that summer and sobbed like a baby when it was time to say goodbye to everyone.

8. The Story in Mythology That Most Resonates With Me:
I was in love with The Odyssey growing up. It's what made me interested in Greek mythology to begin with. I remember doing illustrations of all of the beasts Odysseus encountered a long the way. Cyclops and The Sirens were my favorites. When O Brother, Where Art Thou came out, I was obsessed. Bluegrass and a modern retelling of The Odyssey? I'm in. Perfect.


See Matt Doyle as the title character in Jasper in Deadland now through April 13 at the West End Theatre.

Jasper In Deadland
Best Priced Tickets
Newer
From High School Love to Intergalactic Incest: The Stars of The Most Happy Fella Talk Love Triangles
Older
Zi Alikhan Is #Looking for Fun, Laughs & Good Times at 54 Below
Sign up for BroadwayBox Discount Alerts