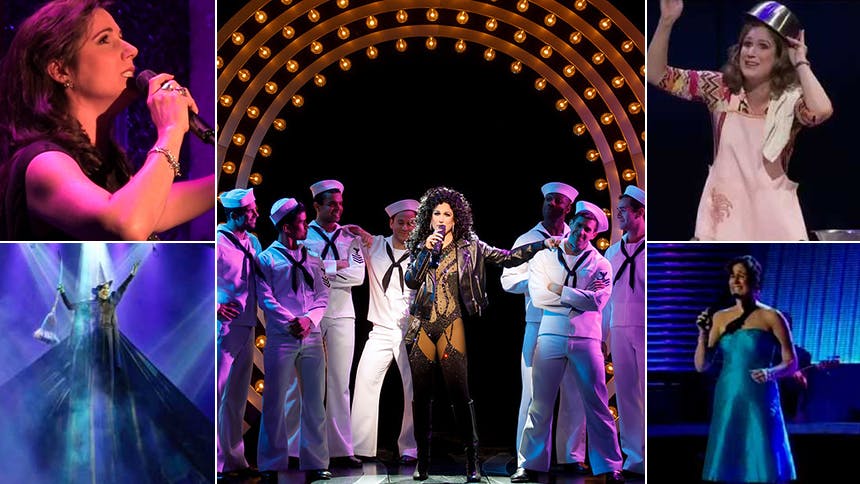 Stephanie J. Block is giving you a full-out, bad-ass diva performance as Star in The Cher Show

. She lands every joke (some with just a look), she sings the house down(!!!), and she absolutely captures the elusive essence of the Oscar-winning icon.


In case The Cher Show is your first time seeing the two-time Tony nominee live, here are a dozen necessary videos of the queen in action.


There’s a chance you might not make it through all 12, so this is first up because it’s required viewing. I feel pretty confident saying this is my favorite “Defying Gravity” vocally—it has such power; it never feels shrill or screamy; it’s divine.

“She Loves to Hear the Music”, The Boy From Oz


Cher isn’t the first major Oscar-winning icon SJB has put her spin on. She made her debut as Liza in The Boy from Oz, and the number is nothing short of a  gay fantasia on national themes.


SJB stopped the show as Judy (the Jane Fonda role) in Dolly Parton’s musical adaptation of her film 9 to 5. She represented the show at the Tony Awards that year performing this at the pre-show concert, and if you aren’t clutching your imaginary pearls by the 2:00 minute, turn the volume up.


You can find probably a dozen videos of Steph singing this song throughout different points in her life and career, but this is most recent so it wins. I can’t believe we never got to see her Fanny Brice. We don’t even deserve it at this point.

“Holding to the Ground”, Falsettos


By now you get that Stephanie can SANG but this moving musical moment from Falsettos is a beautiful look at her acting. I’m buying everything she’s selling in this number.

“The Writing on the Wall”, The Mystery of Edwin Drood


Him: Into?
Me: Stephanie J. Block parking, barking, and opting up.


It takes serious comedy and skill to make this song work. Brava! Also, this seems a good place to plug the audio-only version of her "Ring Them Bells".

“My Heart Will Go On”, Titanic


I haven’t been this excited to hear this song since 1998. Wow, she does not disappoint.


She makes this HUGE belty number seems so effortless. Meanwhile, she’s rivaling Patti at The White House in terms of vocal power in this number.


Damn, this song aged well. So topical. I can’t even talk about the vocals here because they are so next level. I’m not as familiar with The Pirate Queen so I nearly fell over at 2:03.


Closing it out with her Falsettos showstopper because there’s nowhere to go after this.

Get yourself over to 'The Cher Show' at Broadway's Neil Simon Theatre to hear Stephanie J. Block sing Cher like you've never heard her before.

The Cher Show
Best Priced Tickets
Newer
The Prom Is THE Must-Own Broadway Cast Recording of 2018! GIF Reactions to Each Track
Older
Kate Wetherhead Gives Us a Glimpse at the 15 Different Characters She Plays in the Lovable Off-Broadway Musical The Other Josh Cohen
Sign up for BroadwayBox Discount Alerts