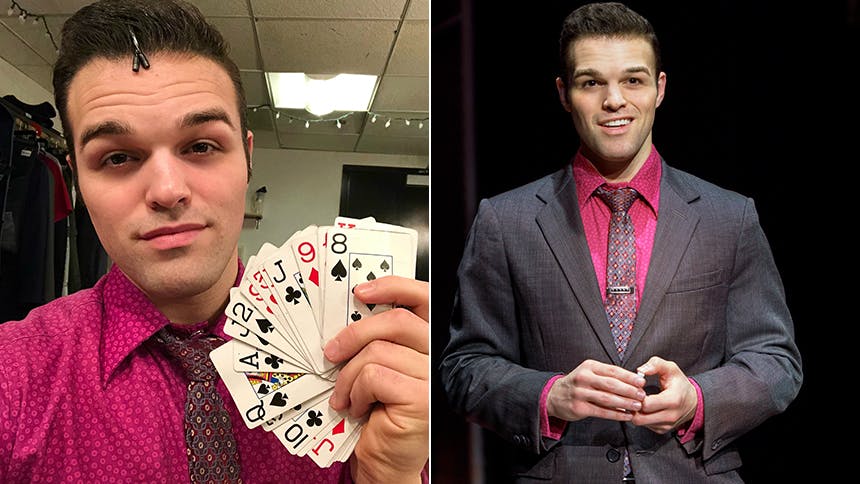 . Sam's performance is so charming and mesmerizing, you can't hold Tommy's misdeeds against him for long.


Scroll on as BroadwayBox gets to know the New York native as he talks about how Jersey Boys is a team sport, his soft spot for Tony Manero, and the lawless icon he's dying to play.

1. You have to have such a connection with the audience as Tommy since you do so much direct address early on. What do you do to make sure that happens nightly?
The easiest way to connect with the audience is the willingness to play! Have fun and play. Now, to tell the story, there’s a set of intentions and an agenda I have to follow, but the audiences’ engagement and involvement is different night to night, so it forces me to start the show without any expectations and just play!

2. What do you like or admire most about the seemingly hard to root for Tommy?
I’m constantly reminding myself that the events and characteristics that may seem ridiculous about this guy are actually very much real. The heartbeat of this show is reliant on the chemistry between the guys playing Frankie, Tommy, Nick, and Bob, and applying that strong offstage chemistry to this brilliant script (thank you, Marshall Brickman and Rick Elice) is what keeps the story rooted in reality. We keep each other in check and very honest onstage, and the team effort really pays off.

3. Three things you love about The Garden State?
The beach, the beach, and the beach. Our family always had a house on the beach ever since I was born! It’s been a huge part of my life, and I have more memories than I can count at that beach house. We sold that house in Sea Isle City and recently my aunt bought a new one in Cape May, and it’s to die for. Did I mention I like the beach?

4. You’ve played some really great roles regionally before coming to NYC, which was most fun for you and why?
Tony Manero in Saturday Night Fever is the most fun role I’ve ever played, second only to Tommy DeVito. The show is about a non-educated, street-smart kid growing up in the disco era who tears it up on the dance floor, and is trying to amount to something in a crummy situation. Being able to explore and share a story like that is a dream come true in its own.

5. Which challenged you most?
Also Tony Manero. I never left the damn stage! As fun as it was it was so tough because the stamina required was unlike anything I’d done before. It was two and a half hours of this outgoing, yet intense character, combined with songs on songs, topped with some INCREDIBLE dancing choreographed by the one and only Nick Kenkel…the man is NO. JOKE.

6. Tell us a memorable audition story.
Oh god. So, I was auditioning for a certain show (which, shall remain nameless) and going into it I had a feeling this wasn’t going to be the right fit. I’ve been dancing my whole life and I consider myself a strong dancer, but this show was like an ABT level, world class, dance for the gods, ballet show. Aka…not my thing. I have a knack for picking things up very quickly, but they started teaching the ballet combo and are FLYING through this thing!! The associate is wrapping up the combo and I’m still trying to figure out the first 16 counts! I have an idea of how it goes and she starts splitting us into groups to actually dance it. A few groups pass and I have this pit in my stomach and this voice in my head saying, “This ain’t for you, guy. Bail out. BAIL OUT!” I’m about to excuse myself from the audition when sure enough I hear, “Sam Wolf.” I hid in the back in my group of 3, marking (not going full out because I had no idea what I was doing) this combo getting in every 5th step, and it was a total nightmare. Luckily there’s no ballet in Jersey Boys!

7. What’s your current TV obsession?
I mean, I’m always watching The Office for the 39th time, but I’ve been digging Blue Planet 2 on Netflix! The show is FASCINATING and it’s all about life in the ocean. There’s so much of this remarkable planet we don’t know about, and my mind is being blown with this one. Not to mention the visuals are stunning!

8. What was the musical that got you hooked on musical theatre?
When I was very young my parents took me to see Savion Glover’s Bring in 'da Noise, Bring in 'da Funk. They say that I was on my feet dancing the whole show at 3 years old, and since then I’ve been in love with the stage.

9. What’s the dream role you have to play someday, somewhere?
Why aren’t more people doing Bonnie and Clyde??? I love that show, and Frank Wildhorn wrote a brilliant score that I’m dying to sing. If anyone is looking for a Clyde, I got a guy…

10.  There’s a big stretch we don’t see Tommy in Act II, how do you like to pass that time backstage? What are you typically doing?
More than likely I’m eating. But if I’m not eating I’m reading my book (currently Armada) unless it’s a Thursday, Sunday, or Monday. Because football.