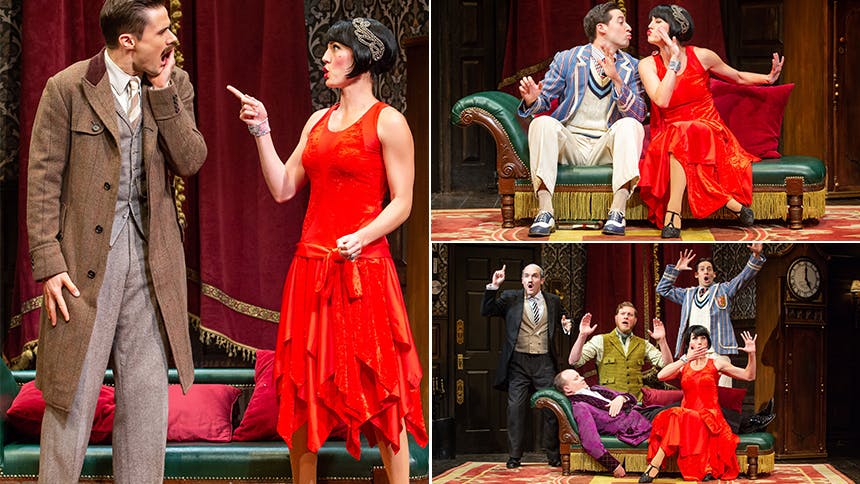 Mara Davi had a breakout Broadway debut as Maggie in the first revival of A Chorus Line, then she replaced Sutton Foster in The Drowsy Chaperone, and went on to star in the feel-good classics White Christmas and Dames at Sea and have a key arc on TV's Smash. Now, Mara is a laugh riot in her first non-musical on Broadway, the Tony and Olivier-winning hit The Play That Goes Wrong

. Mara plays Sandra Wilkinson/Florence Colleymoore, the leading lady of the play-within-a-play. BroadwayBox caught up with Mara to talk about the show's incredible physical comedy, her eco-friendly passion project, and how she stays in musical shape during the run of a play.


1. What is the key to that crazy window trick you do in the show?
The window lift to me feels just like dance choreography. I learned it in a very step by step way and it’s the same every time. The key is engaging the right muscles at the right time to protect yourself. I don’t want to demystify anything, so spoiler alert here, but when they are pulling my arms through the window, if I engage my lat muscles then that helps protect my shoulder. Then as Trevor [Jason Bowen] is pulling me up through the window, he has support of my back. I just relax when he’s down and I could feel his hand tense up on my back when he’s about to pull me up and I just do a basic crunch. It’s almost like ballroom dancing, where you are working with a partner, feeling their tension, and responding in the moment.

2. When you’re doing this long run in a play, what do you do to stay in musical shape?
For the most part I do it on my own. I would love to take classes but being a new mom there’s not much time. My sister is a personal trainer and she just started working for this company called Obe Fitness that does online videos, and I’m obsessed with it. So I do online workouts with my sister and now I’ve got the girls in the cast doing it with me now. I have 20-minutes off in the middle of the show, so we get together and do a quick 20-minute workout together. Then the show actually keeps me in great vocal shape. The show is great exercise to keep the muscles fit.

3. You recently played April opposite Aaron Tveit’s Bobby in Company at Barrington. What’s a fun memory of that production?
My favorite mishap of all time! We had these two yellow bean bags and an actor plopped on the bean bag and it exploded all over the stage, into the orchestra pit. We looked down and there’s white balls of plastic all over the piano keys. Marta goes into singing “Another Hundred People” as stagehands are sweeping up. Then the fire alarm went off five minutes later and we had to pause the show for 45 minutes. It was a show for the books.

4. You and your husband also co-created Vintage Green, which offers vintage eco-friendly tips from previous generations. What are two simple things people can do in the new year to make a difference?
This is something I’m so passionate about. I think simply we could cut back by not accepting what we don’t need. There are a lot of things we get handed over the counter that we just throw away—bags, plastic silverware. I just say, “Thanks so much but I don’t need this so I’m going to give it back to you to use for your next customer.” Just be aware of those extras that we don’t need and cut them out.

The second thing would be reusables. There are reusable versions for everything, which is kind of the main crux of Vintage Green. Our grandparents used wash rags instead of paper towels and handkerchiefs instead of tissues and real silverware instead of plastic. In the 1950s everything turned to the convenience of disposable but it’s actually so much cheaper to reuse what you already have.

5. This is your first Christmas as a mom. What are you most excited for this season with your son, Arthur?
Everything! Every day is a new adventure so I can’t just pick one. He’s really into tags right now—he’s more interested in the tag on the toy than the toy—so I’m going to make him a fuzzy pillow with this fuzzy fabric we picked out the other day, and I’m going to use scrap ribbon as tags all over the edge of the pillow. I’m pretty stoked. It’s going to be a really weird-looking gift, but I think he’ll get some real enjoyment out of it.

Don't miss Mara Davi in 'The Play That Goes Wrong' at Broadway's Lyceum Theatre through January 6.

The Play That Goes Wrong
Discount up to $16
Newer
The Stars of Broadway's Magic Show The Illusionists Share Advice On What Magicians Should Know About Performing Magic on TV
Older
Kenny Leon Takes On Seven Questions About American Son, Actors as Activists, & His Aida Dream
Sign up for BroadwayBox Discount Alerts