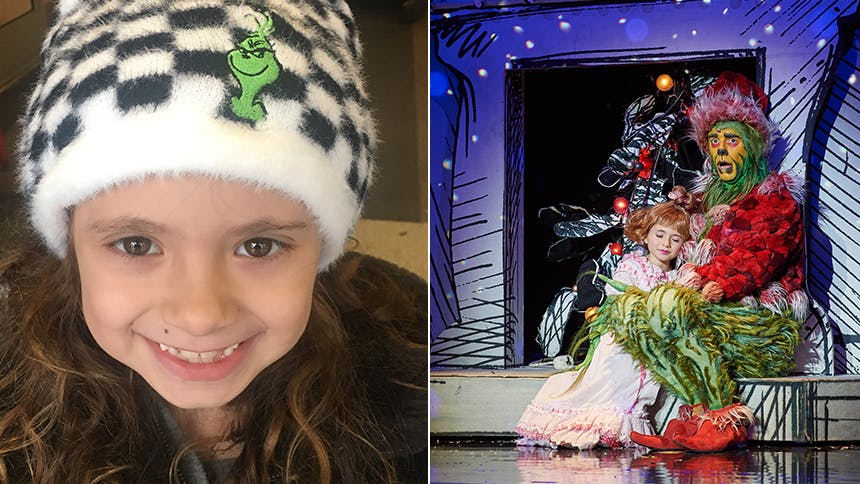 After touring the country as the beloved Dr. Seuss character Cindy Lou Who, Mackenzie Mercer co-stars in the New York production of How The Grinch Stole Christmas

opposite Tony nominee Gavin Lee as The Grinch at Madison Square Garden's Hulu Theatre December 13-30. BroadwayBox caught up with the pint-sized star to talk about her experience touring, what she hopes Santa brings this year, and her Hamilton obsession.


1. What’s your favorite moment in How the Grinch Stole Christmas?
My favorite part is the scene when I’m with the Grinch and get to sing “Santa For a Day”. I love that I get to help change the Grinch’s mindset.

2. What’s your favorite Christmas movie?
Elf. I like Elf because it's funny and I like to watch it over and over. I think Will Ferrell is funny, and I like that he eats a lot of candy like me! (But he eats more...he drank a whole bottle of Coke!!)

3. What’s one thing on your Christmas list this year?
Nintendo Switch. Definitely. Santa makes gifts, so even though my mom says they’re not available, I know Santa can make one.

4. What’s been your favorite part of touring?
My opening night. It was exciting and I was happy with how it went.

5. What city has been most fun to visit so far on The Grinch tour?
Probably Chicago because a lot of people from my family came over Thanksgiving to support me. But, so far, I've liked every city.

7. If you could have dinner with any Broadway star, who would you want and why?
Lin Manuel Miranda because I love Hamilton.

8. What are three of your favorite Broadway cast albums to sing along to?
Hamilton, Annie, and The Sound of Music.

9. What’s your favorite thing to do backstage during the show?
Hang with the cast because I feel like it lets me get to know people better, and they’re fun!

10. What are a few things you’re excited to do or see while here in NYC for the holidays?
I’m excited to see my family and all my White Plains friends who plan on coming to see the show.

Don't miss Mackenzie Mercer in ' Dr. Seuss’ How The Grinch Stole Christmas! The Musical' at the Hulu Theater at Madison Square Garden December 13-30.