Let’s Hear It for the Ladies! Ranking Disney’s 12 Best Musical Moments for Women 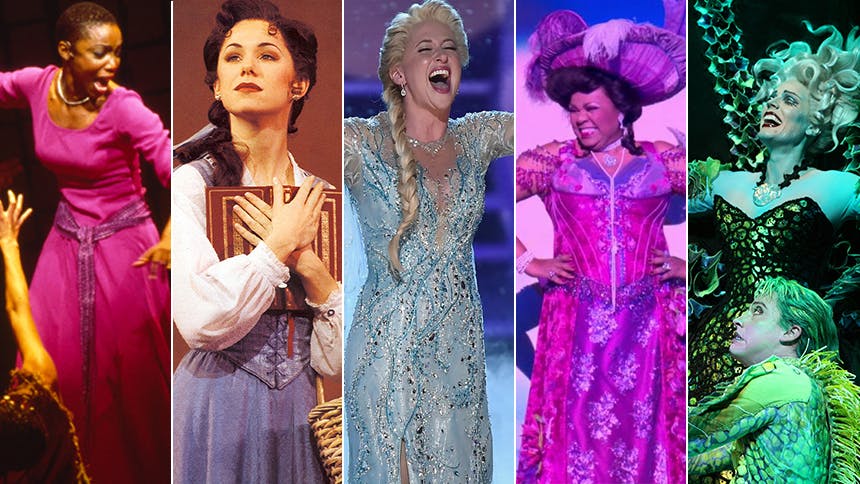 Female empowerment and sisterhood are the name of the game over at Disney’s hit musical adaptation of Frozen. Sisters Anna and Elsa each take their own hero’s journey, and sing some really killer songs along the way. But then again Disney’s always known how to give a leading lady her due. Scroll on as we rank a dozen amazing Disney diva showstoppers from their Broadway musicals (Note: Obvi. a good “God Help the Outcasts” would be on here, but we’re talking Broadway only).


Considered one of Walt Disney’s favorite songs, this beautiful, moving moment really delivers onstage as well as it did in the film. In a musical that feels unabashedly silly, fun, magical, and childlike, this moment feels wildly adult and grounded. Also, it’s probably the best showcase for a Mary’s voice.

11. “I Want the Good Times Back”, The Little Mermaid


The original song written by Tony winner Alan Menken and Tony nominee Glenn Slater is a punchy little ditty written to introduce audiences to Ursula the Sea Witch, and it’s catchy AF and just really darling. In many ways, it harkens back to a Broadway past.


Nothing like a big, belty, campy number from the featured female character. In a musical all about the big dance extravaganza, this park and bark number is a very welcome reprieve. I’d honestly love to see a drag queen do it.

9. “Part of Your World [Reprise]”, The Little Mermaid


Yes, “Part of Your World” proper is iconique(!) Disney, but does it have that killer opt-up ending? I think not…


So this is going to be the first of 4 Aida songs on a 12-song list, but respect (and revive!!) Aida. This song takes a hot minute to heat up, but this clip just cuts right to the meat of it—that crazy ending.


I live for a good “Watch What Happens”. There is something about it that reminds me so much of “Look What Happened to Mabel”. It’s such a nice platform for a strong voice and great comedic timing. By the number’s end, you are rooting for this character.


If you’ve never full-out belted along to Sherie Rene Scott singing this song in your car, shower, bedroom, etc, are you even really alive?! The big fashion runway moment in the middle of the song is so iconic that when The Cher Show does its runway moment, you can’t talk about it without referencing Aida, the OG.


Heather Headley reigns queen of The Lion King for her performance of this number. Like “Feed the Birds”, it might be a boring moment for the kids, but revisiting this song as an adult, it became my absolute favorite in the score. Can’t wait for Beyonce to give us her “Shadowland” in 2019.


Again, if your childhood didn’t include overly dramatic line readings along to Susan Egan singing this, you missed a beat somewhere. This song is so stunning, the composition, the way it builds, the lyric—it’s timeless.


This song is so damn epic and amazing, it ended up on the radio. Think about that. And no shade to Deborah (‘cause she slays), but no one goes to that fierce place like Tony winner Heather Headley. Again, true fans have every single Headley inflection memorized. This is the test of my muscle memory: Disney songs sung by women 20 years ago.


What can one even say? This has to be the most beautiful song on the list. What a gift to an actress and her company to perform this number on a Broadway stage nightly. When they get to that “one more longing backward glance” at 3:15, it’s nothing short of transcendent.

Caissie Levy had the Herculean task of taking this song that every person can hear Idina Menzel singing in their head, making it her own, and taking it to the next level for Broadway, and mama delivered. Her “Let It Go” is one of the most spectacular moments for a leading lady in a musical on Broadway right now. You can feel the energy of the audience with her as the song builds. Then Caissie, in her genius, gives you more than you knew the song had it in with “the cold never bothered me anyway”. It’s truly a moment worth the price of admission over at Frozen. It’s so good, we’ll give it to you twice.