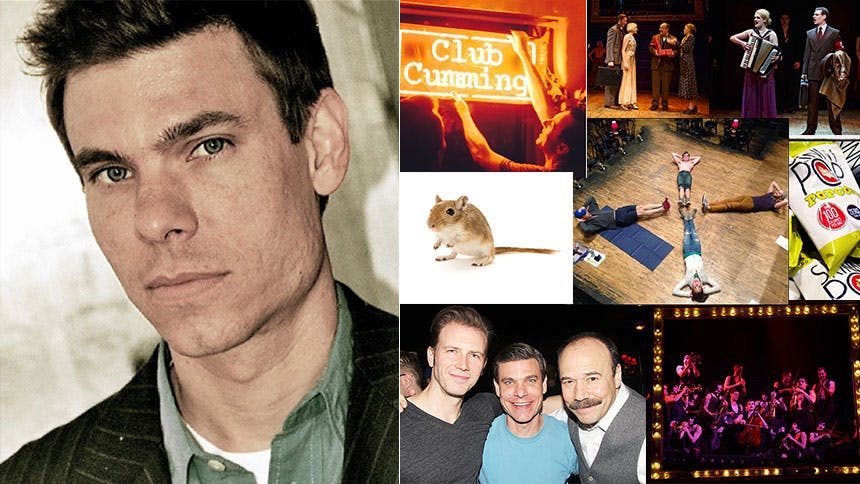 Cabaret standout Aaron Krohn gets the audience at Studio 54 pretty riled up as Cliff and Sally’s German smuggler friend turned Nazi, Ernst Ludwig. Below, Krohn shares with BroadwayBox 10 things about life at the Kit Kat Klub that even fans might not know.

1. We really do play our instruments. We have a slew of quadruple threats in the cast! In some cases people play 2 and even 3 different instruments. It’s an incredibly talented group. Some have been playing since childhood, others have learned more recently. I, for example, did not play the banjo before starting rehearsals; I had to learn it. I play the guitar, but of course all the chord shapes are different, so I learned 58 new chord positions in order to play the banjo in the entr-acte. And Gayle had to learn the accordion, which she now plays with great confidence and ease. So, yes, everyone plays their instruments. With shows such as Cabaret, Once, Million Dollar Quartet, Sweeney Todd, Company and more, it's become a real asset to know how to play an instrument. "Special skills" are paying off!

2. After a particular black out in the show I whisper the name of an animal to Bill (Cliff) & Michelle (Sally). This was inspired by a jokingly-suggested word change to one of the lines I say to Linda (Fraulein Schneider). The line: “He is not a German." The change: “He is not a gerbil.” Some highlights: Gerbil, hamster, Tasmanian devil, sea anemone. Sometimes I do themes for the week; such as Teenage Mutant Ninja Turtles, Sesame Street characters, desert creatures, etc. Michelle calls it "the zoo". 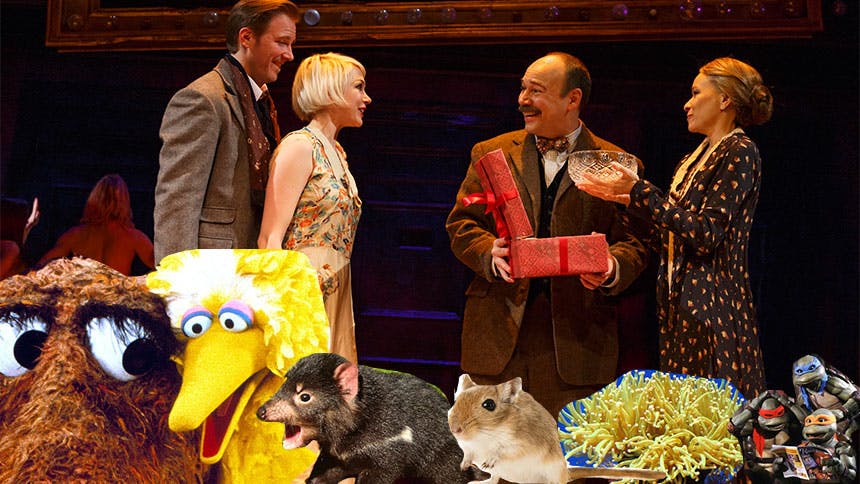 3. We all know Danny Burstein is tremendously talented…we all know he's a great guy…but I'm here to tell you he also has the best legs in the business. 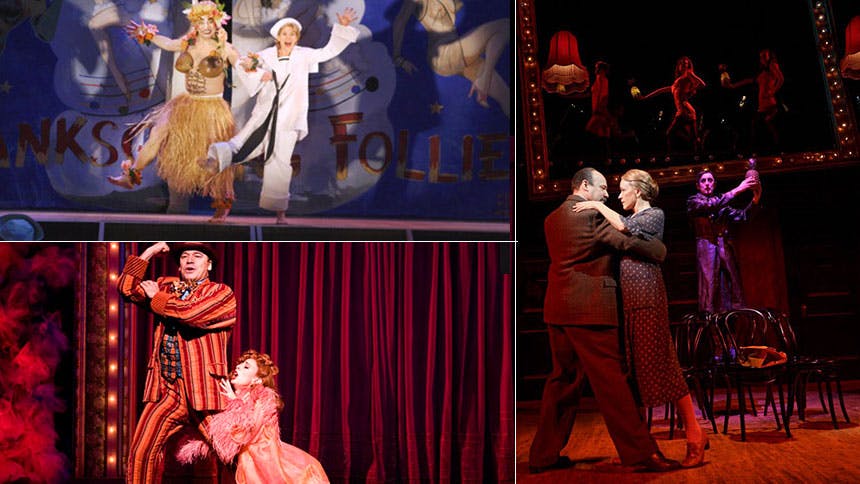 4. Ernst gets better posture, tighter hair and paler skin as the evening goes on. He loses color (literally and figuratively) as he turns Nazi. This of course works in tandem with William Ivey Long's terrific costumes, which get spiffier in each scene. And, via vanity, Ernst eventually sheds his glasses. I wanted to have him start bumping into things but Sam (wisely?) refused to allow it. 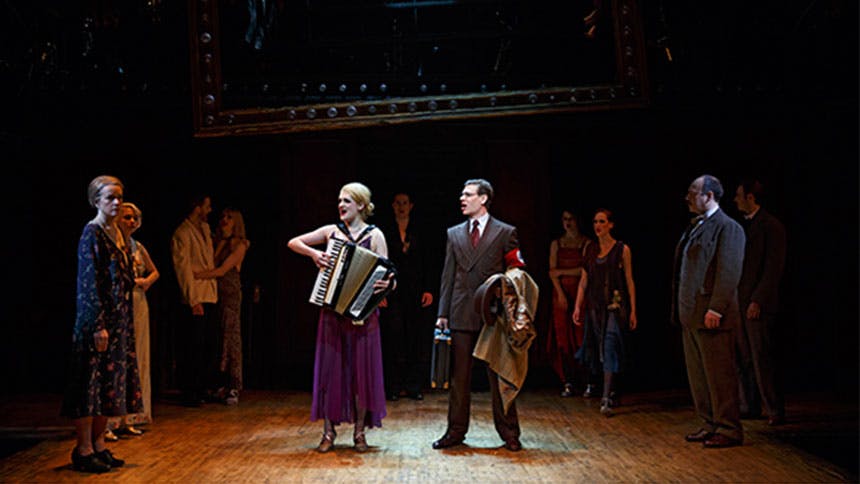 5. Bill Heck and I might be related. One night I left my glasses in my dressing room…two flights up. Not only does Ernst wear glasses but, as I’ve said, I take them off later as a statement about his vanity as he becomes more horribly entrenched in the Nazi party. After a brief berating of self and with about 6 seconds to go I called out, "Does anyone have any glasses?!" I spotted Kimberly, Alan's dresser; she wears glasses. I dashed over, asked if she minded, took her glasses and rushed onstage. When I entered the first thing I noticed was that everything in the world had become bigger and fuzzier. It was also very difficult to judge distance. I lunged into the scene mildly fearful that I would slip off the lip of the stage. I hoped no one would notice the glasses. Fortunately, I made it through the scene without falling into the audience or running into any furniture. I assumed I’d gotten away with it! But afterwards Bill informed me that he was having a tremendously difficult time keeping it together from the second he saw me. It turns out that Kimberly's glasses are pointier and much more purple than they had appeared in the blue dusk of backstage.
I’m sorry”, I said, “I didn’t think you’d noticed.”
“You looked like my grandmother,” Bill replied. 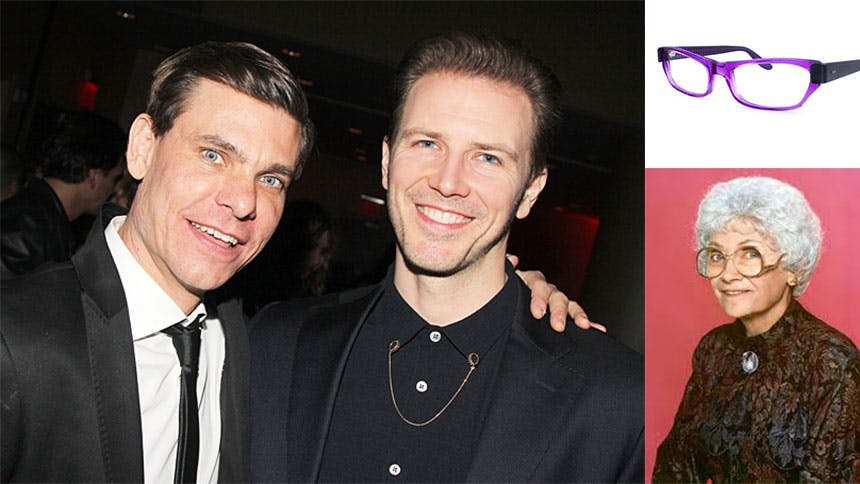 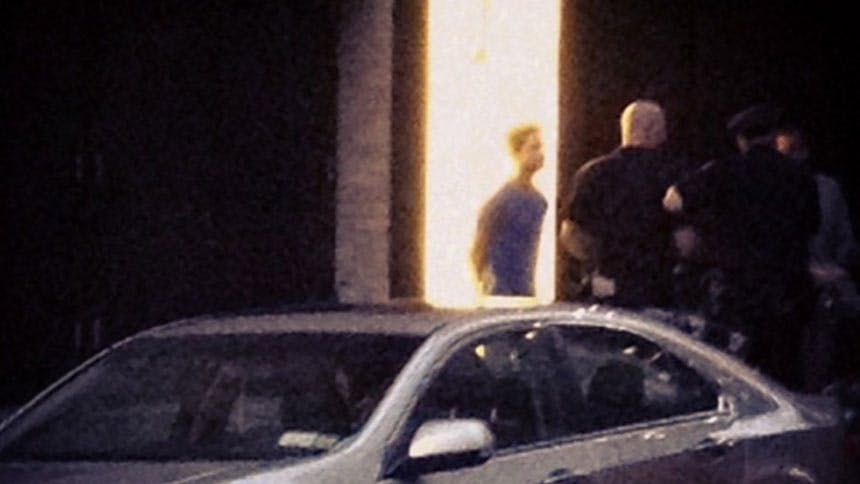 8. Every two-show day, between shows "Core-Castle" occurs. Every Wednesday and Saturday at 6:45pm a group of cast and crew gathers onstage to do a variety of core exercises. Everyone who turns up is required to lead at least one exercise. This is what keeps the Kit Kat Klub so fit and how the orchestra stays so “beautiful!” Sometimes sound check coincides and we get a core workout sing-a-long. Everyone’s cores are looking chiseled…and the castle is coming along quite nicely as well. 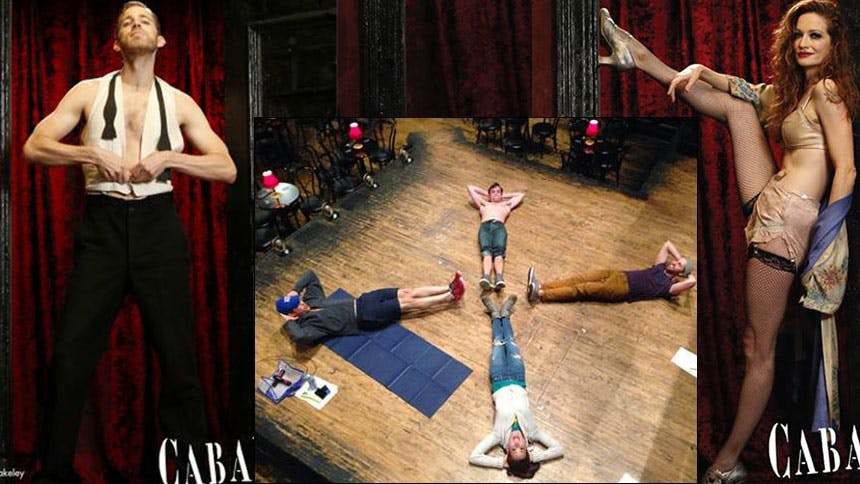 9. Artie Gaffin, our stage manager, is the “Snack Master.” Never before has a cast been so well supplied with snacks. Not only does he generously keep the snack stand outside his office fully-stocked, he learns what people like and makes sure they get it. You may think he didn’t notice that you liked skinny pop?...wrong!…enough skinny pop to pack a piano with will magically appear on your dressing table. Casually nibbling some dried mango? Artie saw! More mango for you!! (come to think of it I’m not sure we could do the show without skinny pop and dried mango) It should be noted our wonderful and kind stage manager provides these snacks out of pocket…literally…as a clown doth scarves. 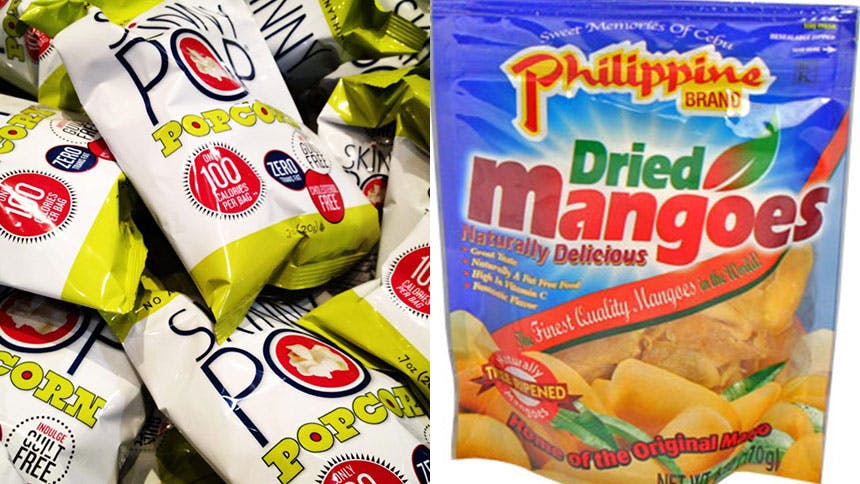 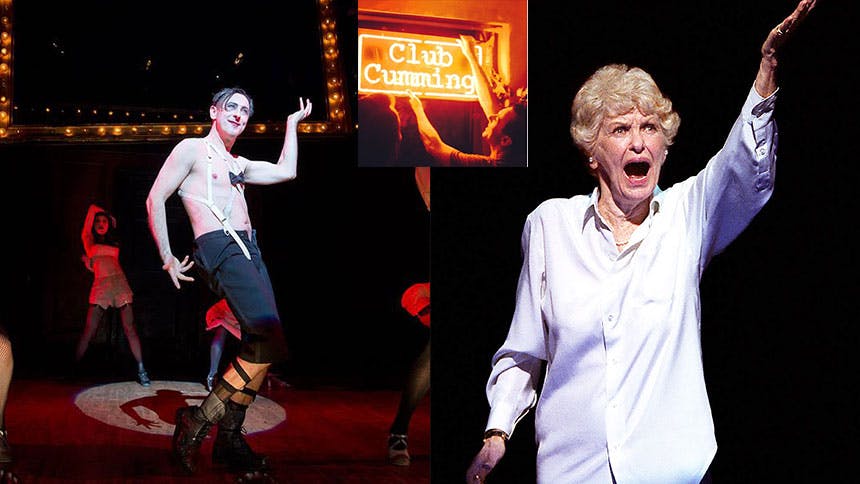 And now after knowing all this about the Cabaret gang, make a date to see the Tony-winning revival live at Broadway’s Studio 54.