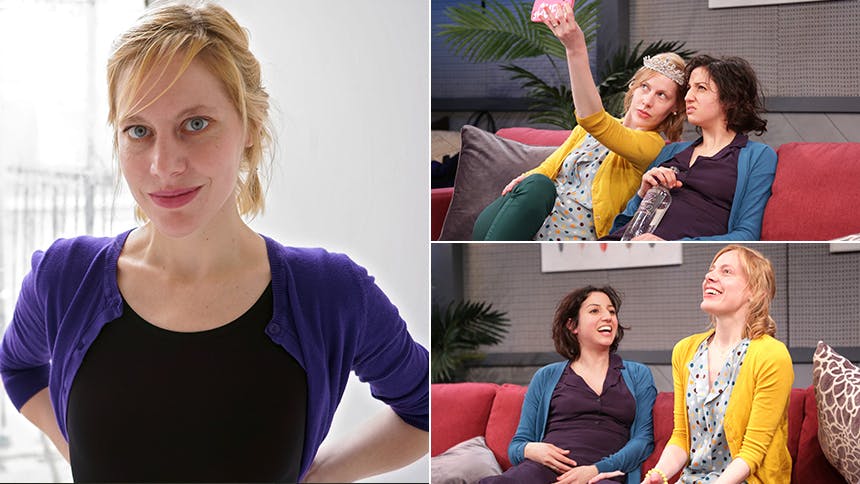 Playwright Abby Rosebrock had her plays produced or developed at Williamstown, Cherry Lane, New York Stage and Film, Labyrinth Theater Company, Drama League, Ensemble Studio Theatre, Dixon Place, The Brick and more, as well as regionally in South Carolina, Georgia, Montana and Idaho. Her latest work, Dido of Idaho, runs off-Broadway at the Ensemble Studio Theatre through April 8, and co-stars Abby and her roommate and collaborator, Layla Khosh. Dido of Idaho tells the story of Nora, who is determined to get her life back in her control after waiting too long for a married man to leave his wife for her. She moves back in with her mom where comedy and healing ensues.


BroadwayBox caught up with Abby to hear from her about getting work produced off-Broadway, building audiences, and creating a human story rather than “just” a woman's story.

What was the greatest challenge getting Dido of Idaho on its feet and how did you overcome it?
It was hard to sell myself and others on a play about a woman involved with an unavailable man. As a woman, in some ways, I've been taught to disrespect my own instincts about what's important and epic in life—what kinds of problems are urgent to address—and to trivialize my own favorite genres and traditions, especially family comedy and romantic comedy. I think I overcame this distrust in my own work and values when it became clear to me that compulsive allegiance to unavailable men is maybe the great human problem of our time (to use grandiose terms). It's what we need to grow past as a species, to get to a more loving place. I've been lucky to find collaborators who share these values, who understand Dido as a human story rather than “just” a woman's story, and who share an interest in exploding and revitalizing romantic comedy as a revolutionary genre. No one play can accomplish the latter, but finding people who share in that dream has emboldened me to keep going.

What are three pieces of advice you’d give to new playwrights who want to get their work produced?
A) Learn how to meditate or pray or get in touch with a higher power or whatever, so that you can ask your God at every turn how best to serve the world. If you are an atheist, think of God as love itself. God: how do I handle this sticky situation in rehearsal? God: am I writing this scene from a place of resentment or from a place of compassion for the characters? God: am I going to this show or this party because I feel like I have to or because there are people there I can meaningfully support? I think that is the only way to take care of yourself and make your best work and to improve the contexts in which you are making it. It is really hard to hear the answer sometimes if you don't have much experience with this kind of thing. I am just now starting to learn it and I still hear the wrong answers a lot; it's probably always gonna be hard. But right now, I am finding it's a better strategy for creative growth (and for a healthy kind of self-preservation) than listening to your ego or to critics or to institutional authorities. I mean, listen to all those sources, but know that they're not more important than your soul is, or more important than love is.

It's kind of absurd for me to be offering up this high-minded advice, but it's the advice I wish I had gotten when I first started writing and acting.

B) Just because someone is powerful and popular among your colleagues and considered an authority in some sense doesn't mean they're not human and full of shit. We're all full of shit. If someone's not gonna help you produce meaningful work, blow them a kiss and turn to the people who love and inspire you. Even if you feel alone, you'll meet some character on the subway who shows you a heartbreaking compassion that feels like water in the desert. That person is more important to your work than the colleagues you feel like you have to impress. This is something I have to remind my ego a lot, but I know deep down that it's true.

C) Make time every day for things that aren't theatre.

Who are the female playwrights who inspire you?
I really just want to list all of my brilliant, hard-working colleagues. The fact that they are female is incidental. Right now, Brittany Allen comes to mind as a masterful comedic writer whose plays explore important social themes from new and compassionate angles. I was recently very inspired by a reading of her very challenging, revolutionary (rom-com-influenced!) play Redwood. Brittany also performs her own plays without apology, which I hope to see more and more women doing as the industry evolves.

In your opinion, what’s the biggest issue playwrights face today?
I've heard the phrase “development hell” tossed around among playwrights, and even among institutions who are frustrated with their own systems. I think this term refers to the trend of expecting a play to go through years and years of workshopping, and to accommodate notes from a hundred different directions, before the play is considered aesthetically valid, and a valid story.

From a creative standpoint, this can be problematic, stifling and counterproductive for a number of reasons. From a financial standpoint, as well. On the other hand, a long grueling development process is sometimes the right thing for a play. Feedback from a variety of sources, over an extended period of time, can be essential, insofar as it helps you understand the conversations your play is taking part in so that you can ultimately advance those conversations. As an audience member, I much prefer polished work to undercooked work, as long as the polished work is also somehow daring, brazen and fresh. So, I think the answer lies not in transcending “development,” but in transcending “hell.” The way to do that is to pay playwrights handsomely. Establish a culture of investing in playwrights, far more than is currently standard. The good ones are cutting themselves open day after day, taking massive existential risks in the public eye, in hopes of arriving at some truth and galvanizing communities. You can't do that with any level of mastery unless you are taking excellent care of yourself and your energy and your mind, and you can't take excellent care of yourself and your energy and your mind—especially in New York—without decent money.

Another issue playwrights are facing is the struggle to reach robust, diverse audiences. An empty seat at any play is a seat a broke high-school student could be sitting and learning and having the time of her life in. A seat at a play is a chance to change a life and a person's way of thinking, and a chance to build community. Building an audience is not about making money. It is about reaching people and making conversation. But giving away a seat to someone who needs it will pay dividends in the long run—including financial dividends—that leaving a seat empty will not. We are in this to change the world, period.

See Abby Rosebrock's 'Dido of Idaho' at the Ensemble Studio Theatre through April 8.