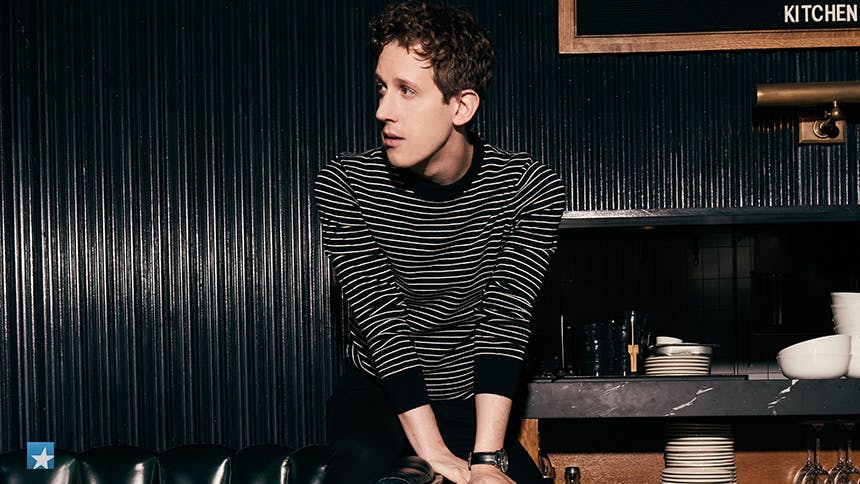 BroadwayBox and photographer Jenny Anderson launch a new photo and interview series this fall spotlighting 10 current Broadway musical replacement stars whose performances left us stunned in our seats! The illustrious group (ranging from title stars to scene-stealing co-stars) was shot at the beautiful West Village restaurant The Spaniard. The final profile is on Waitress

star Alex Wyse, who delivers a hilarious and quirky performance as Ogie. The Lysistrata Jones and Spring Awakening alum departs the Broadway production on December 9, so you have to run to see this wonderful performance.


1. Tell me about your journey with Waitress, from first seeing or hearing it to getting the offer to play Ogie.
I first saw the show back when it was in previews. I was very curious to see about the new musical that took over the Brooks Atkinson after Spring Awakening left. I ended up loving the show, and I didn't really think too much else after that. Then couple years later, I was asked to come in and audition for it. It was only then did I realize, “Oh maybe I could be a part of this.” Initially it was not on my radar, but I fell in love with the material while I was working on it and then I auditioned. I've completely fallen in love with the show, and I think the cast is unbelievable. Everyone is kind and loves to be there. Everyone is a great team player, and they've been nothing but welcoming to me.

2. What do you feel was unique about your replacement process in Waitress?
Something I thought was great about this process was that they encouraged me from the get go to develop my own Ogie—to find out what's funny or what's honest on me and to let this all come from me organically. While I had to fulfill the blocking they'd set, they really encouraged me to not copy anyone's line readings and to find my own way into this. That made the process, not only a much more enjoyable and creative experience, but I think it's made me better in the part, because even though I didn't create the role, I still got to come to it from inside out.


3. Finish this thought for me: My Ogie is ____.
Heartfelt. Sure, an audience will appreciate comic timing or the great jokes that Jessie Nelson wrote, but I think what will really connect them to the character (and also not make him into some kind of scary stalker) is if he's coming from a place of love and not a place of possession. I think the real comedy comes from honesty, and I'm just trying to make my Ogie loving and real—and that is, I think, what makes Ogie funny.

4. Ogie’s online handle is OKC with A Bullet. You grew up with AIM. What was your most memorable screen name?
Well for all you theatre nerds out there, one of my screen names when I was like 12 was Nothing_But_Greens. It's so embarrassing.
Did you have to explain to everyone all the time?
No, if you got it then you were in the club. If you didn't get it, I didn't have time for you.


5 This series is about replacement performances that left us stunned. What’s a performance you saw as an audience member that left you stunned?
This actually happened when I was a kid. My dad and I went to go see Proof on Broadway. Anne Heche was in the show, but she was out that day. [Caroline Bootle] went on, and my dad and I were initially disappointed; but then she gave one of the most raw and powerful performances I'd ever seen. We were also watching her make her Broadway debut. She was just sobbing at her curtain call. We watched her go through this major life experience and that was worth so much more than getting to see whatever star was supposed to be in that play. That totally blew me away and gave me a real appreciation for what it means to be an understudy. Then years later, I got to be an understudy in one production and experience the challenges and the highs and lows of all of that.

6. From your Twitter to your series Indoor Boys to Ogie, you really have a knack for comedy. Tell me about the people or influences who've helped shape your comedy.
I mean really my comedy came from being small and scrawny and an outcast and figuring out that I could make people laugh when I was young, and that was a way to survive in the world.

It's funny though because so many of the things that have really influenced me have been heavy dramas where people are going through it. But I can tell you, I absolutely love Jon Cryer. He's someone I've always looked up to. He's an awesome actor, and I'm lucky that I know him now and he's an awesome guy. He's someone who's impacted me and inspired me in the world.

7. With your online series Indoor Boys, you have this extra outlet that doesn't rely on the business of Broadway. What has that given you as a creative person?
I always feel like so many times we're fighting to be a part of somebody else's creative circle. So when you figure out how to make your own creative circle and bring people to something that you are making, that can be even more fulfilling. I've done many different things like writing, producing, and writing music to just try to make stuff in the world. I would just make things because I need to make things to survive. That’s been the hardest I've ever worked and required more of myself than anything else I've ever done, but it's been the thing that I'm proudest of too. It’s also very vulnerable. I'm not hiding behind someone else's words or someone else's character they've written, but I'm offering up a different kind of piece of my soul, so that feels like I'm even more on the line.

8. Is there a project you're proudest of?
Well, right now I'd have to say Indoor Boys. Wesley Taylor and I worked our asses off to make this thing, and it's not done yet. We were sitting around and waiting for someone to call us, then we were like, “Screw it. We're going to film something.” Then it just kept building on itself and the world kept expanding. We were including more of our friends, and then we were getting actors we really respect like Veanne Cox and Carolee Carmello. That was just a dream come true to have had the two of them play our moms. They are such geniuses, and it was an enormous joy to have them be a part of this little universe we were all making together. It became something that was bigger than just me or just Wes, it gave us just so much purpose in the world. Wes and I are talking about making other things together, so I think our creative partnership is only beginning.


Photographed by Jenny Anderson at The Spaniard Restaurant. Hair and makeup by Austin Thornton and Gianna Yanelli. Styling by Jake Sokoloff. Assistant Stylist: Phylicia Pearl Mpasi. Shirt from H&M; pants by Zara; watch by Fossil; and sneakers by Noah Waxman.


Get yourself over to the Brooks Atkinson Theatre before December 9 to see Alex Wyse in Waitress.