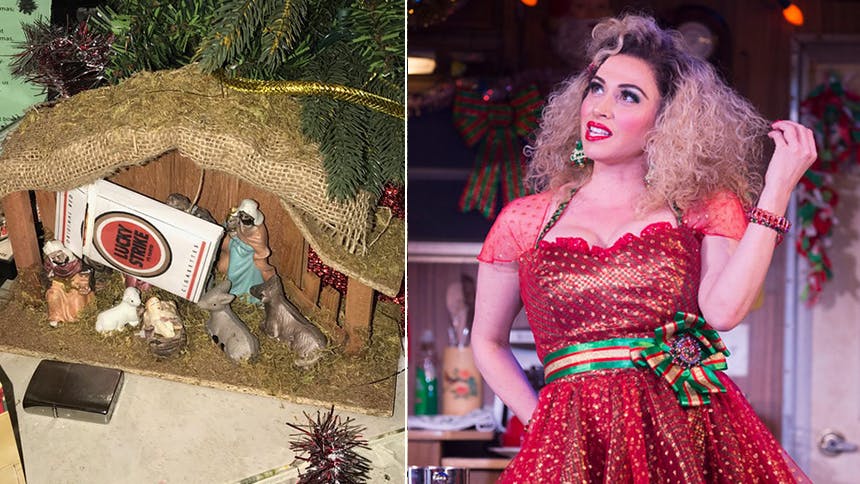 You better fly like a red-nosed reindeer on Christmas Eve over to the Westside Theatre to see Olivier Award winner Lesli Margherita in the hilarious, can't-miss comedy Who's Holiday

. Lesli stars as a grown up Cindy Lou Who and let's just say life has not been kind to the lovable Dr. Seuss character.


The one-woman-show takes place in Cindy's trashy-fab trailer, and BroadwayBox asked Lesli to share with us her five favorite things one could find on the David Gallo set.

Cindy likes to keep her smokes in the manger. The Donkeys look happy about it.

While Cindy was er…incarcerated…she got an online degree. I'm not sure what business she is going to go into but good for her.

Cindy’s Great Uncle left her the trailer, and…this bullet hole in the window. I love this so much. You can't even see it from the audience. No clue if he was shot at, or was doing the shooting...

Another gem you can't even see from the audience—abandoned knitting. It's on the floor, dirty and looks like it's been sitting there for a long time. I love that Cindy tried it once and promptly discarded it. The needles could be used as weapons, which is why she probably still has it.

In Cindy’s “Entertainment Corner” there are several books, all romance novels except for The Rules—the guide to finding the right man (she did NOT pick the right one the first time). By her cassette boombox, she has several mixtapes, and most of them are Barbra Streisand, of course. Pretty sure "My Man" is Cindy’s fave song.

BONUS- My absolute favorite thing on the set is something I can't even show you. All I can tell you is that I requested a picture of my friend Eden Espinosa to be up there, and I get to look at it everyday. You will just have to see the show to know why. HAAAAAAA.

Hurry over to the Westside Theatre before December 31 to see Lesli Margherita in Who's Holiday.