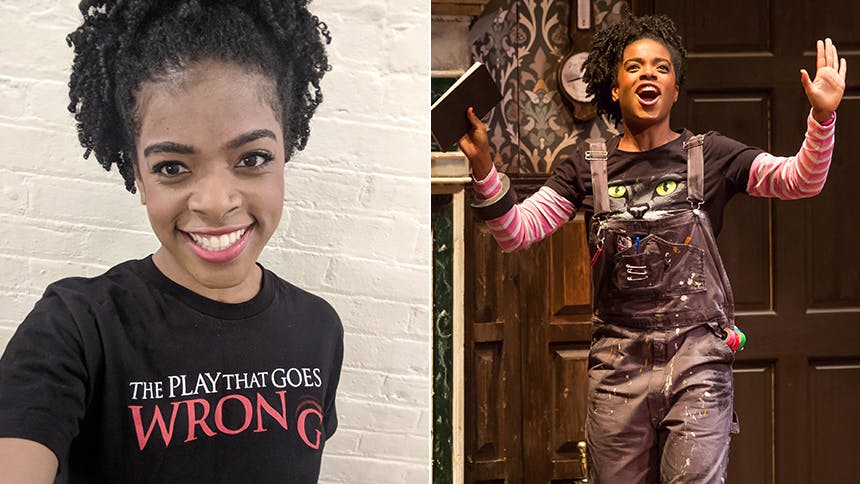 Ashley Bryant gives a performance you are going to talk about well after the curtain (and set) comes down at Broadway's The Play That Goes Wrong. Ashley stars as Annie, the shy stage manager who through a series of misfortunate events turns into a very hammy and hilarious leading lady. Get to know Ashley better as she talks balancing being a business owner and Broadway, travel therapy, and channelling Sally Field in an audition.


1. What was your process in making Annie totally your own:
My favorite part about the writing of this play is that each role can be played by a variety of actor "types". The show is being done on Broadway, the West End, and in national tours. There are several Annie's out there. I was initially called in for another role. As I was reading the script, I was certainly drawn to Annie but I think it was helpful that I wasn't trying to create her for an audition and could just imagine her quirk, boldness and bewilderment while I learned the script. The character, the way I imagined her, felt familiar to me...like I wanted to hang out with her. It was at the final callback, I was asked to audition for Annie. By that point, I adored the role and was excited to test out how I envisioned her.

2. What’s your pre and post-show like for The Play That Goes Wrong:
My prepping varies depending on what I've done during the day and how I'm feeling. Sometimes, I need a jog, jumping-jacks, and time to hang out with the cast. Other times, I meditate for focus and calm. This show is very physical, so I always include stretching and the most annoying vocal warm up you've ever heard. My Annie's voice is very "pingy". A few of us are a part of the show's pre-show with the audience and before that I always need to say "good show" to my dressing roommate Amelia McLain and to pop a piece of Orbit Bubblemint gum (which, of course, I toss out before the show gets too wild). It takes me a while to wind down after the show. Post-show usually includes some kind of soup (my fave food) and hanging out with my husband.

3. When you walk into the Lyceum Theatre, what moment in the show are you looking forward to most:
Having fun with the audience! I get to spend time in the audience before the show officially begins and I especially enjoy chatting it up with kids seeing the play. I also secretly hope something will go a little bit awry every night. Nothing major to disrupt the show, just something we can all laugh about backstage. I have a great time with this cast and crew. Being silly and laughing at each other backstage is a fun bonus.

4. Can you tell us about your journey with your business, Paper Moon Playgroup:
Paper Moon was actually founded by a Brooklyn mom who hired me as the first teacher. I created our early curriculum and loved that my "day job" brought me so much joy. When the founder, moved, I bought Paper Moon from her. I didn't want Paper Moon to end and I felt strongly that Brooklyn could benefit from an affordable cooperative program like ours. I never intended to be a business owner or program director, but Paper Moon has become a very important part of my life! The timing was great because as my acting career took more of my time and energy, I was less available to give the "Moonbeams" the daily attention they deserve. Now, Paper Moon has two fabulous teachers and I am around to lead dramatic play and, of course, direct our annual play—which is the most adorable piece of theater New York has to offer.

5. What was hardest about turning that dream into a reality:
The most difficult part of making both work is making sure I'm giving sufficient energy to both jobs. The Paper Moon families and teachers have been very supportive as I've stepped into this role. The first few months of the show has meant less time in the classroom. I bought Paper Moon to give myself flexibility to audition and perform, but it has become much more than a day job. I feel attached to it, I want it to grow, and be an asset to the community.

6. How did The Yale School of Drama change the way your process or how you viewed performing:
YSD trains actors, designers, playwrights, theatre managers, technicians, and dramaturgs. Most of the projects I worked on were completely student run. By working with my peers, I learned to be less of a student and more of a collaborator. I learned to ask questions, offer insights and began to trust that what I brought into a room could be valuable to a project. I notice it most in audition and rehearsal rooms. Where I used to ask "How can I do what they want?" I now ask, "What can I can contribute?"

7. European city you’ve lived in that everyone should visit:
Well, my family and I only ever lived in German cities (which I love) but we traveled around Europe quite a bit. I can't get enough of Switzerland. I remember my dad and I skiing down the Matterhorn in Zermatt when I was 6. It was much too advanced for me but I had a great time. I've been back to Switzerland several times in winter and summer. I love mountains anywhere, but the Alps—right?! I shot a short scene in a movie (luckiest gig ever) in Davos, Switzerland. It was travel therapy at it's finest. Hiking up mountains, jogging around crystal clear lakes and eating my weight in chocolate. Highly recommend it.

8. You're also a pretty serious runner. What are three songs on your running playlist:
“Brooklyn Go Hard,” Jay Z
“I Choose,” India.Arie
“Look What You Made Me Do,” Taylor Swift

9. What movie or TV Show can you watch over and over again and always laugh:
It's hands down The Golden Girls I've been a true fan since I was 4. I've seen every episode an embarrassing number of times. It's a borderline obsession. I know all the punchlines and it still makes me laugh.

10. What’s your most memorable audition story:
I auditioned for my college BFA program with M'Lynn's final monologue from Steel Magnolias, using Sally Field's performance as a point of reference. I was cast as Clairee in a production when I was in 10th grade. In high school the tall kids play the older parts, so it made compete sense to me to play a 55- year-old grandmother in mourning. I was serious about this piece...shaking my fists and screaming "whhhhyyyy??" at the top of my lungs. I kinda love that me for being so sure I could pull it off.

Don't miss Ashley Bryant as Annie in 'The Play That Goes Wrong' at Broadway's Lyceum Theatre.