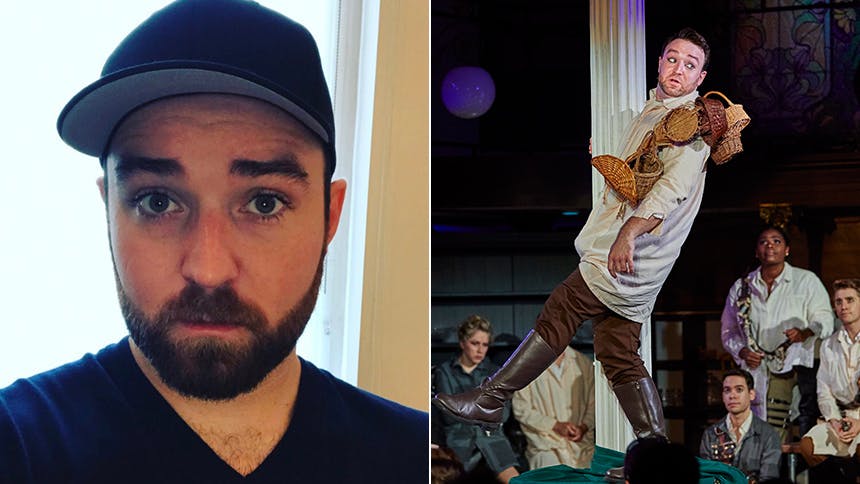 Charles Osborne gives an absolutely hilarious and scene-stealing starring performance as Bottom and others in Food of Love & Third Rail Projects' immersive production of Midsummer: A Banquet. This wildly creative new take combines all the joy and romance of Shakespeare’s classic comedy with multiple tasting courses served throughout the show. The whole evening comes together to create a truly magical and memorable experience. 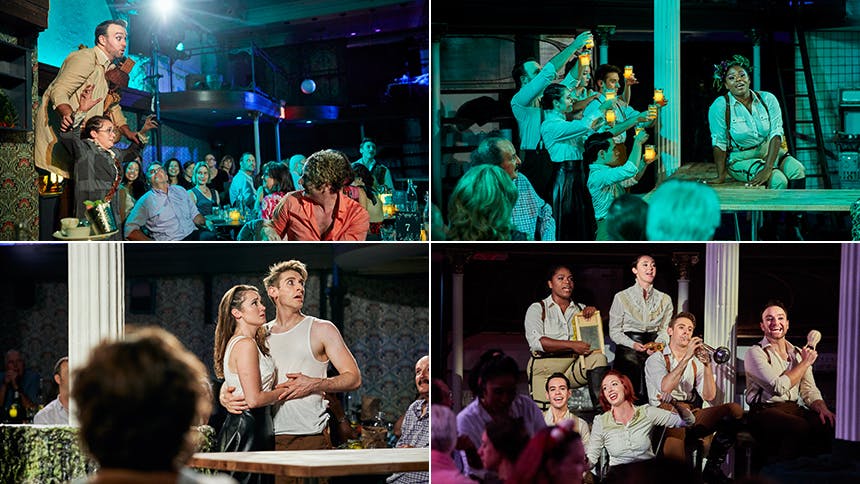 
BroadwayBox gets to know Charles Osborne a bit better as he discusses how to make Shakespeare feel and sound contemporary, his go-to party trick, and how he made history in North Carolina.

1.  What’s the key to performing Shakespeare and making it feel as current to audiences as colloquial language?
I think the key is all about intention. Human nature never changes, and that’s why these plays are still relevant and entertaining 400 years later. So, if we work to understand the human intention underneath a seemingly dense text, the audience will understand it just as well as we do.

2. As a performer, what do you enjoy most about working in immersive theatre?
I love the surprises. The audience is immediately intrigued because they are (pleasantly) put off their game upon entering the space. They have no idea what’s about to happen, and that element of intrigue and surprise makes for a lively and fascinating night of theatre, especially when it is as well-crafted as this show.

3. Bottom gets turned into a donkey in the show. What do you consider your spirit animal and why?
I have often been described by friends as “a golden retriever who doesn’t realize how big he is,” and I think that is very astute. I am a very enthusiastic and rambunctious personality, and my eagerness to spread that joy often leads me to accidentally break either things or people. My memoir should be called Dangerous Exuberance. I’m so excited, it hurts. Literally.

4. What was the moment you knew you wanted to be a professional performer? Was there an early play, film, etc that inspired you?
I can’t recall a time I didn’t want to be a performer. But, when I was 8, my parents took me to see Riverdance. And I very clearly remember that night changing my life. I begged my parents for a solid year to let me take dance lessons, and they eventually agreed. That dance training paved the road for my entire career in musical theatre, and opened so many doors, including this one, Midsummer: A Banquet.

5. Tell us about a Shakespeare performance you’ve seen that you’ll never forget.
When I was in high school, the Royal Shakespeare Company went on tour to, of all places, Davidson College, in my tiny town of Davidson, North Carolina. They did an immersive production of Pericles, which completely transformed the theatre. It was the first immersive production I had ever seen in my life, and it was thrillingly well done. I will never forget it.

6. You’re a playwright as well as an actor. What, in your opinion, is the “perfect play” and why? What do you love about it?
I don’t know that the “perfect play” can exist, just because of the ephemeral nature of the art. A film or a novel or a painting exists, more or less, exactly as it is for all time. But a single play will completely different every production depending on the performers, the designers, the staging, the evening, etc. Imagine The Lion King produced at a dinner theatre. A very different experience.

7. What were the reactions like to your opera The Body Politic? What about that project are you proudest of?
The reactions were overwhelming. Trans activists we workshopped the show for were identifying with conservative characters. Republican audience members were identifying with Afghan women. Parents of trans teens brought their kids. It was incredible. It was an opera about trans and Muslim discrimination in my home state of North Carolina, and right when we opened, the “bathroom bill” passed in North Carolina. Three days later, we received special permission from the state to perform the opera in the North Carolina State Legislature and invite all the members of the Assembly. It was the first time in US history an opera or musical had been performed at or for a legislature. And out of all the reactions of all productions, my favorite was from a North Carolina Representative who wrote a letter on our behalf saying “I knew nothing about people who identified as transgender… mainly I learned what I know through trial and error and sitting through a performance of THE BODY POLITIC... I recently heard Melvin Williams say ‘The arc of the moral universe is long; but it bends toward justice. It’s just that we have to do the bending.’ That’s what THE BODY POLITIC did for me. I believe it can have the same impact on others." And that’s what art is all about, making an impact, one heart at a time.

8. You’ve done the hilarious parodies Forbidden Broadway & Spamilton off-Broadway. What’s your go-to celebrity impression at parties or for friends?
Jennifer Coolidge and Mandy Patinkin. Jennifer Coolidge could be reading the phone book and it would be hysterical, but Mandy Patinkin trying to “connect with the kids” and flawlessly rapping Nicki Minaj, is my go-to party trick.

9. Tell us a memorable audition story.
I once belted a comedic version Jazmine Sullivan’s “I Bust The Windows Out Ya Car” while doing fly ‘90s moves at an open call for Mamma Mia. Spoiler alert: I’m not in Mamma Mia.

10. Who influenced you most as a comedic performer?
Honestly, probably The Golden Girls! If you ever want to study classic comedy technique, look no further than Dorothy, Sophia, Blanche, and Rose. They’ll tell you everything you need to know.

Don’t miss Charles Osborne as Bottom and others in Midsummer: A Banquet at Café Fae in Union Square through September 7.