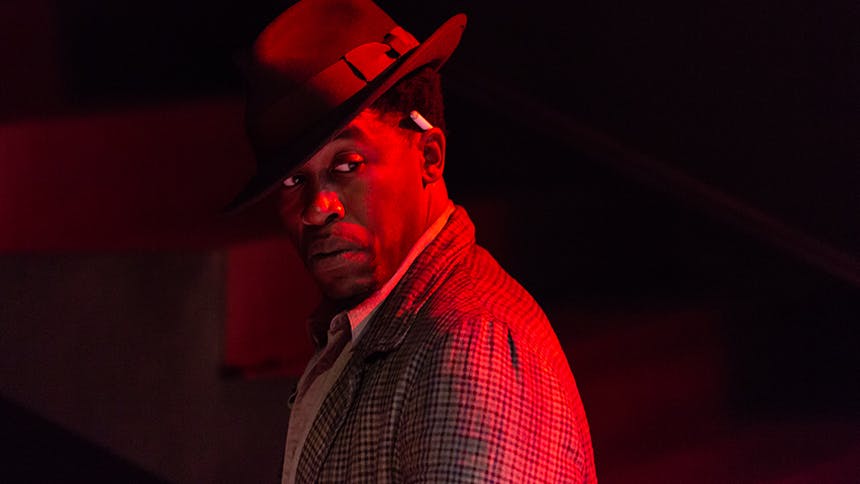 For their summer repertory season, The Acting Company serves up the piping hot political theatre New Yorkers need. Shakespeare's Measure for Measure and the New York premiere of Nambi E. Kelley's Native Son each examine fate, injustice, and the roots of our darkest impulses and play in rep at off-Broadway's The Duke on 42nd Street Theatre through August 24. Jason Bowen stars in both shows, as the fair and kind Duke Escalus in Measure for Measure and as the embodiment of Bigger Thomas’ inner turmoil, The Black Rat, in Native Son.

BroadwayBox caught up with Jason to discuss the immediacy of both plays, the most memorable night of The Play That Goes Wrong, and the challenge of doing two plays in rep.

1. What do you feel these two pieces have to say to New Yorkers living through the Trump Administration and American in 2019?
The two pieces tell people to really seek to understand what/who you think you already know.

2. Can you recall a piece of political theatre that rocked your world when you first saw it?
I haven’t actually seen a production, but Dutchman by Amiri Baraka really impacted me the first time I read it.

3. What’s been the biggest challenge and reward with doing two shows in rep?
The biggest challenge doing the shows in rep would probably be the rehearsal schedule. It was the first time I’ve had to put a play down for a month and then basically pick it back up and go straight into tech. It definitely challenged our ability to retain all the hard work we initially put in, but we were able to do it pretty seamlessly.

4. Do you have a favorite memory from your time with Broadway’s The Play That Goes Wrong?
I honestly enjoyed everything about The Play That Goes Wrong, but if there’s one thing that stands out I’d say it was the first time I had to leave my regular role as Trevor and go on as Robert. It was nerve-wracking because there’s a pretty long monologue towards the end that essentially explains the whole show, and I wasn’t all the way comfortable with it. But, fortunately, it all worked out. It was actually one of the most gratifying moments of my career.

5. What was your initial reaction to reading this adaptation of Native Son? What made you want to be part of telling this story today?
I loved it. I immediately connected to The Black Rat and loved the concept that Nambi introduced with the character. The potential of being able to embody someone’s thoughts during his most critical moments was really appealing to me. I love how Nambi wrote this piece. This is a story that maintains its relevance in this current sociopolitical climate and I really looked forward to being a part of telling it.

Don't miss Jason Bowen in Native Son and Measure for Measure at off-Broadway's The Duke on 42nd Street through August 24.

Measure for Measure
Best Priced Tickets
Newer
#Mood: Chicago GIFs Capture How You Feel During Each Day of the Work/School Week
Older
10 Darren Criss Broadway Musical Performances That Left Us Slayed In Honor of Elsie Fest 2019
Sign up for BroadwayBox Discount Alerts