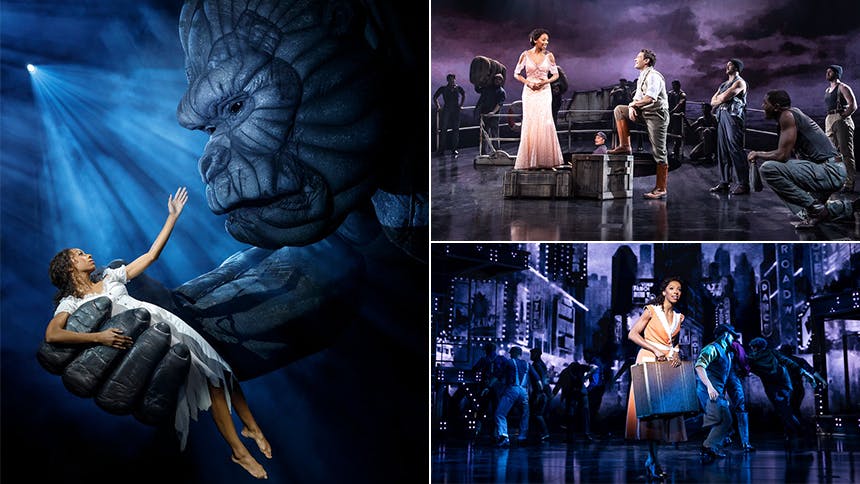 . Christiani leads the production as Ann Darrow, the determined aspiring actress who will do anything to survive in 1930s NYC, including risking her life to capture the heart of the Eighth Wonder of the World, Kong. To make Broadway audiences believe the classic beauty and the beast tale, she stars opposite an incredible 20-foot, 2,000-pound puppet, and together they create theatre magic.


BroadwayBox caught up with Christiani to talk about how she found her chemistry with Kong, the source of her strength onstage, and responsibility of playing Ann for a new generation.

1. You have the incredibly difficult job of having this gigantic puppet as your scene partner for much of the show. How do you humanize him? How do you find chemistry? What do you do to sell this love story between Kong and Ann?
One of the first things that helped me find the human connection with Kong was working with the actor who voices him. In rehearsals, we were able to establish such a personal and unique connection, so the next step was simply enlarging the scale.  If a scene between Kong (the puppet) and I felt disconnected, our director would call down the voodoo operators (the actors who control his voice, face etc) and the onstage puppeteers. We would do the scene again as human beings, establish a more intimate reality, and then bring the puppet back onto the stage and rework what went wrong.  It was a truly fascinating process that was unlike any other rehearsal I'd ever had.

Also, watching the work of the incredible onstage actors who make him come to life is really helpful when it comes to humanizing Kong. The idea of a misunderstood creature trying his or her best to be heard reaches so far beyond that of a “puppet” and an actor. That experience in itself is so universal and easy to connect with, and is something I have struggled with personally. Tapping into that throughout the piece keeps me emotionally vulnerable from the second I meet Kong until the end. This helps the love story become clear to the audience and allows them to feel comfortable having a deep emotional connection to a technically “lifeless” creature.

2.  What’s been the biggest pinch me moment so far of your King Kong experience?
To be honest, I feel like I am pinching myself every single day. But if I had to choose the biggest, it may have been when I met Kong for the first time. By that point, I had read the script hundreds of times; I had already been in rehearsals, had fittings etc.; and I was just starting to settle in to what I knew was the coolest moment in my life. However, nothing prepared me for the moment our producers flew in the most magnificent, unimaginable piece of magic that I'd ever seen and called it “my scene partner”. I sobbed to the point where one of the producers had to hug me and calm me down saying, “Yup, this is real. It’s really happening”. Talking about this is giving me chills. I have believed in the magic of theatre since I was a little girl, and, at that moment, that little girl could not fathom how she was about to be a part of it.

3.  Your Ann is fearless. She roars with strength. Where do you draw that strength from? How do you combat the doubts every actor has to deliver strength and power?
In trying to figure out who this version of Ann was to me, I had the pleasure of researching the lives of my grandmothers. Two incredibly strong black women born in the rural south in the early 1930s. Because of the social climate they were raised in, they had no choice but to be fearless—their lives depended on it. When doing this show, I think about their fight and the fight of the women in my family before them and it all instantly feels bigger than me. It feels like the story I’m telling is so much larger than my own doubts and insecurities, and that helps me mask my fears. Now the second the curtain goes down, I am extremely critical of myself and doubt everything I just did. However, I take a few deep breaths and remind myself that this is bigger than me. I am simply a vessel on stage, there to tell the stories of women who were never heard, and to lift the spirit of those in the audience.

4. What do you think happens to Ann after all this? What becomes of Ann Darrow?
I’d like to believe that Ann Darrow gets the opportunity to start over. Her dreams of becoming a starlet aren’t far behind her but her need to tell her story is stronger. She starts to write her own work—telling the lessons of compassion she learned from Kong. In doing so, she gets the opportunity to create powerful, truthful uninhibited roles for women.

5.  What does it mean to you that young African American girls are going to see themselves represented in you and your Ann?
It means the world to me that black and brown girls who see this show feel seen and represented. I can’t tell you enough how many times I felt like I only belonged in certain spaces, or that who I was and how I looked wasn’t universally acceptable. It inspires me to keep working knowing that I am performing in a space that historically wasn’t open to me.
Who provided an important piece of representation for you growing up?
My high school drama teacher, Linda Stevenson, was my representation. This woman had the grace of Maya Angelou; she was a member of the Delta Sigma Theta Sorority (like my mother and aunt); and she believed in each and every one of her students like her life depended on it. She made me feel so powerful and so beautiful because of the way she carried herself. The second I graduated high school and started studying music theatre in college, I tried to emulate her dignity and strength. That really helped me find myself and where I wanted to be in the world of theatre. Her actions gave me the confidence to question why I didn’t see myself in certain spaces. Unfortunately, she is no longer with us but I can feel her pride, love, and many critiques of my performance each night.