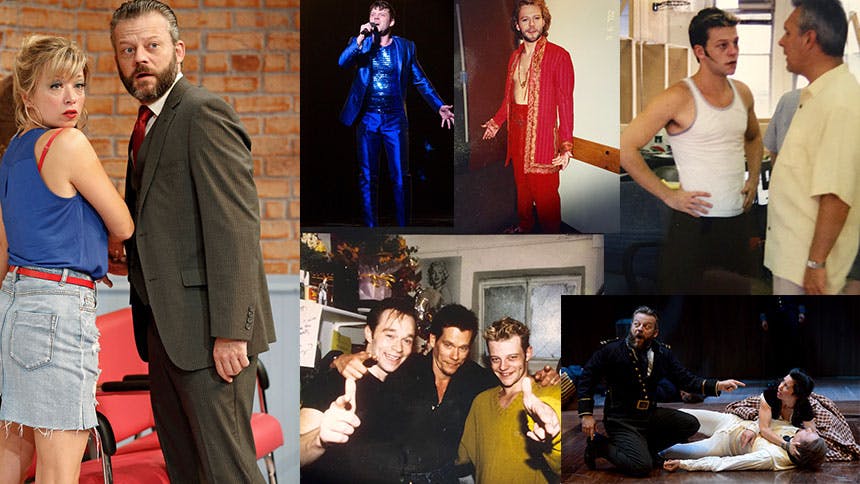 Jeremy Kushnier is one the key murder suspects in the LOL, interactive off-Broadway whodunit Shear Madness.

Kushnier plays Eddie—the sketchy salon patron who may or may not be having a thing with one of the other prime suspects, hairdresser Barbara. The whole thing is a big hoot and well worth checking out.


Below, Kushnier shares with BroadwayBox five rare photos from his stage career and the untold stories that accompany each.

Myself and Walter Bobbie in rehearsals for the workshop of Footloose in 1998. 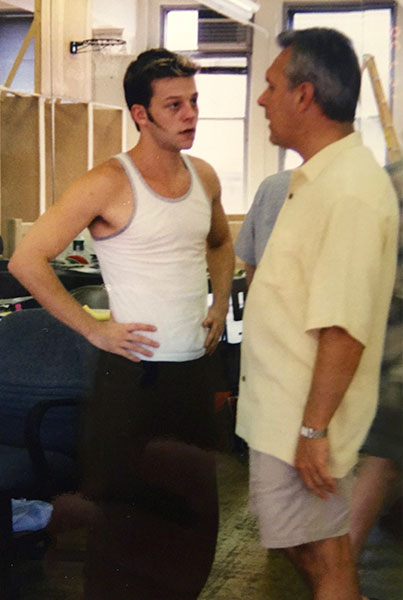 At this point, I just assumed you do a workshop and then it goes to Broadway, and that’s how it worked. I was just thinking about how exciting this was. At one point I was in rehearsal and I realized the gravity of what I was doing at 22 and I called a friend of mine who is sort of a mentor and said, ‘I don’t know if I could do this.’ He said, ‘Just shut up and do your job. You’ve done this all your life. This is no different except in terms of geography. Just think about it like you’re just doing another play and treat it with the same reverence and care you would on any show you’re working on.’ Now anytime I sort of get freaked out about a part or show or something being hard or vast, I think back to that piece of advice ‘just shut up and do your job’, because that’s what it is.

On the other side of the coin I’m looking at this 23-year-old who thinks he’s broken through and now it’s this forever. I just want to grab him and tell him, ‘Enjoy this! Take every offer because you get 15 minutes to grab it and it’s not linear—once you get that first leading role doesn’t mean they are going to keep falling into your lap.’

I got the audition and got on a bus at 11 o’clock that night for a 12-hour bus ride and while I was on the bus my agent got a call from the casting director saying, ‘Don’t bother. They are going to postpone.’ So I got in and I had my audition and it went great because I didn’t care—I had taken this 12-hour bus ride, I was in New York, and it was such a fantasy that I just went in and had a good time. I left the room and they said they wanted me to stick around for callbacks tomorrow, but I didn’t have anywhere to stay or money to get a hotel. They found me a place to crash, then the next day I came in for the callback to read with Jennifer Laura Thompson and that was it.

I walked out of the room and the chorographer A.C. Ciulla walked up and said, ‘Can you dance?’ I said, ‘Yeah.’ Then Barry Moss came out and said, ‘I know you have to go catch a bus but we’re going to book you and we’ll see you in a few weeks.’ This was back in the day before cell phones so I couldn’t call my family and tell them; I had to spend 12 hours on a bus by myself holding this information I couldn’t share with anyone ‘til I got home. It was pretty intense.

Billy Hartung (Chuck Cranston on B'way) and myself getting a visit from Kevin Bacon after he brought his kids to see Footloose. 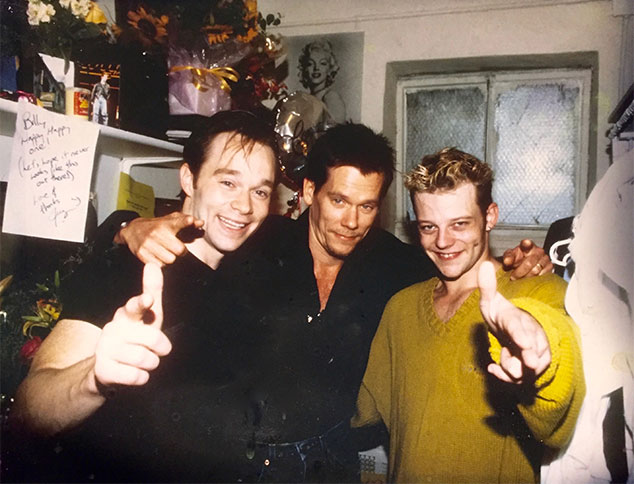 Billy and I shared a tiny little dressing room—I’m sure it’s not what Lin-Manuel has over at Rodgers—and he’s one of my best friends to this date. I was a fan of Kevin from the movie, his acting and producing, and his band The Bacon Brothers, which Billy turned me onto. So as a joke (because we knew he was coming), we set up a huge shrine with all these pictures of Kevin Bacon and had the music playing in the background.

Me as Radames backstage on the tour of Disney’s Aida. 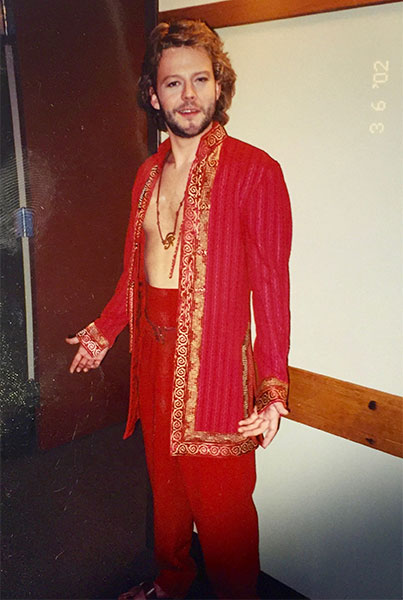 Notice how high the waistband is on these pants? It seems the waistband got higher and higher the less concerned I got about keeping in shape on that tour. I remember seeing the costume plot and saying, ‘So I literally do not wear a shirt through the whole show? Ok.’ [Aida] was a super fun show to sing and I had such a great time on that tour—I did it for almost 2 and half years. I liked being on the road—I have a little gypsy in me. I liked getting paid to see new cities and explore the country and the world. It’s this non-reality bubble you can fall into and enjoy. I made so many good friends that are friends of mine to this day. That was sort of the end of the heyday of touring—when you could make a decent salary before it all went non-union. I was in my mid-to-late 20s making too much money and spending it all in hotel bars. It was a good time in my life with terrible, terrible hair.

A press shot taken by Joan Marcus of me as Judas for the 2012 revival of Jesus Christ Superstar in which I understudied Jesus, Judas and Pilate


It was a very humbling experience in a lot of ways. Getting the chance to understudy Jesus, Judas and Pilate was really interesting and fun and challenging. Being an understudy you get to be the hero—you come in and save the day—and through this production I had that opportunity. I ended up going on as Pilate in San Diego because Brent Carver dropped out, so I did six shows as Pilate, did Jesus one show and did Judas another show. Then we get to New York and I’m back in the ensemble again after playing Pilate, which was fine but I’m 36/37 thinking, ‘I’m back here but it’s fine. I have a job on Broadway.’ Then midway through the first act one day Josh [Young] gets sick, and I end up going on and staying on for a couple weeks. It was hard but it was fun and exciting. I loved singing that incredible score and playing opposite Paul Nolan—I think he’s such a star and such a great guy. I got to wear this ridiculous suit with high heels. Being the understudy you get to be the hero but then you take off the blue suit and go back to where you were and it’s as if nothing ever happen. It was not an easy time.

Paul Terzenbach as Casio, Robin Abramson as Bianca and myself as Iago in the Pittsburgh Public Theater’s production of Othello.

This is my favorite photo of all of them for so many reasons. I’m back in New York going through a lot of personal stuff in my own life, and a friend of mine Joe Siravo (who I did Jersey Boys with and who is now playing Ron Goldman’s father on the O.J. show) is one of the foremost teachers of Shakespeare I’ve ever known. He had been giving me a hard time for a long time about coming to his Shakespeare workshop, Shakespeare and Beyond. I said, ‘Joe I’m like 40; I’m not about to start my Shakespeare career.’ But I remember I was walking home from Trader Joe’s one day and I just thought “F#ck it, I’m going to call him and go to the workshop tonight.”

I ended up going for five weeks, and at the end he came up to me and said, ‘A buddy of mine is playing Othello at Pittsburg Public, and I think you should go audition for Iago.’ I said, ‘You have to be high. You want me to go audition for one of Shakespeare’s biggest roles?’

So Joe and I buckled down and I worked harder than I ever have on anything in my life, and I had one of the craziest, best auditions I’ve ever had and I end up booking it. Then I freaked out. I spent four weeks working with Joe for about four to five hours a day. Flash-forward, I ended up having the best time of my life, and through this process not only did I fall in love with Shakespeare and this character but I fell in love with this woman that I performed with every night, Robin Abramson.


Shear Madness is fun and silly but it is a play and it’s a play in New York, so it’s a chance for people to say, ‘Wait a minute, he doesn’t sing but we still want to watch him.’ That was hugely attractive to me. It was a chance for me to take a step in the direction I want to be in. Then, at the same time, it’s such an acting exercise. Acting is listening and being totally present in every moment. In any other play you can get away with not doing that—and you just suck—here, if you don’t do that, something will happen and you will miss it and break the piece.