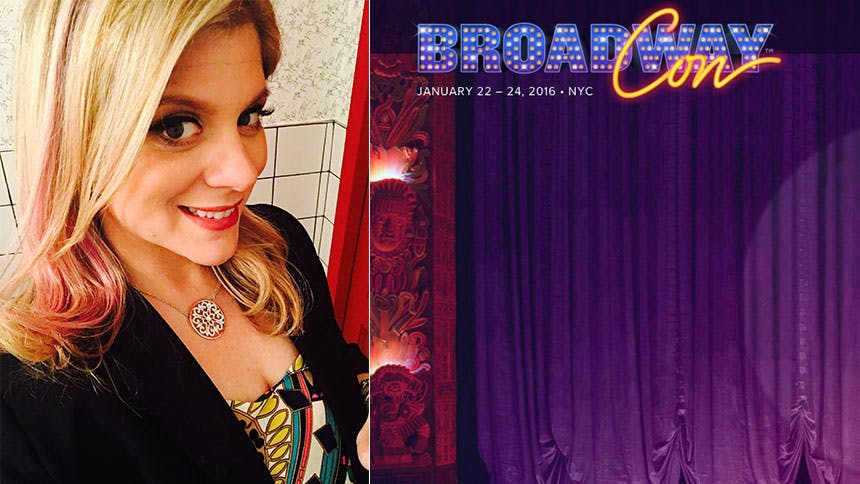 This weekend Broadways fans unite at the first-ever BroadwayCon—a three-day convention for Broadway and theatre enthusiasts. The line-up is legendary with a great mix of B'way celebs and the movers and shakers behind the scenes. Below, BroadwayBox gets to know Melissa Anelli, The New York Times best-selling author of Harry, A History: The True Story of a Boy Wizard, His Fans, and Life Inside the Harry Potter Phenomenon who had the brilliant idea to create BroadwayCon.

1. The Broadway show that changed my life the first time I saw it:
Crazy for You. The lights, the glitz, that incredible music, and most of all the the joy, imprinted right on me. It made me want to bask in that joy all the time.

2. My desert island cast recording:
Is Hamilton too much of a gimme? I don't care, I can throw down Guns 'n' Ships with the best of them.

3. The BroadwayCon event I am being asked about the most:
The RENT reunion. Over the past 20 years that show has managed to mean a lot to so many millions of people, that it is without a doubt the most looked-forward to event of the weekend.

4. My go-to Broadway YouTube clip is:
The opening of the 2013 Tonys. Best opening of any show ever.

5. Musical theatre character who would be my patronus:
Elle Woods. Her energy and determination and positivity are inspiring.

6. If I wrote Harry Potter The Musical, the big 11 o’clock number would be called:
"Being Alive (Was Nice)," sung by Harry.

7. Broadway show I wish I could time travel back and see the OBC of:
A Chorus Line.

9. If I was organizing a BroadwayCon with any five people dead or alive:
You're expecting me to name celebrities right now, but I'm going to take this question in a different direction. The people who my business partner, Stephanie Dornhelm, and I will tell you are essential to any BroadwayCon are: our incredible partners at Playbill, and the core staffers at Mischief Management (Taekia Blackwell, Jordan Edwards, Sierra Fox, Abby Larus, Candace Rim). These are the people without whom it would be very difficult to put on a BroadwayCon, at no matter what place we are at in the space-time continuum. I guess that was more than five, but, to be fair, it is literally impossible to organize a BroadwayCon with five people. It takes a village!

10. My biggest pinch-me moment professionally has been:
Organizing the RENT reunion. Somewhere out in the cosmos, my 16-year-old self is hyperventilating into a paper bag. That show means everything to me, and is why BroadwayCon exists.