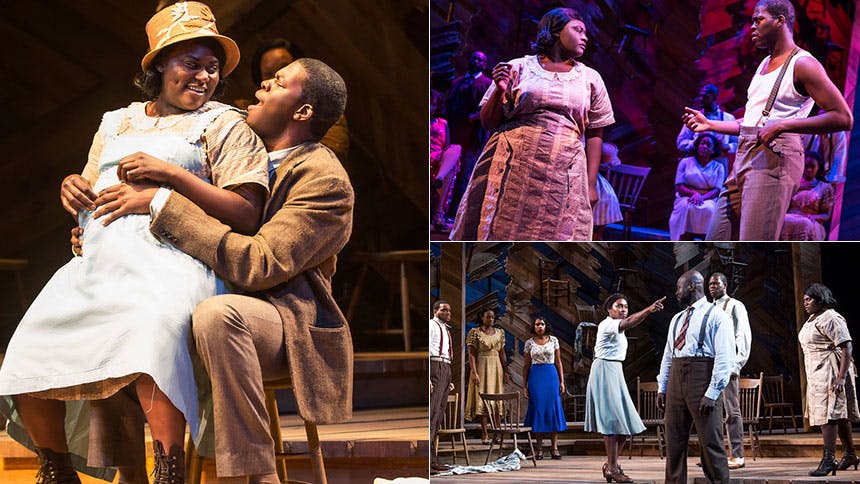 Kyle Scatliffe has the career many young actors dream of. Soon after graduating from AMDA, he earned an Olivier Award nomination for his performance as Haywood Patterson in The Scottsboro Boys at The Young Vic in London. Almost immediately after that run, he made his Broadway debut as Enjolras in the new revival of Les Miserables, and now he's co-starring as Harpo in one of this season's hottest musicals The Color Purple. BroadwayBox caught up with Kyle to talk about The Color Purple, the TV show he'd love to join, and when he's finally going to do something that doesn't make us cry.

1. Tell me a secret about life backstage at The Color Purple.
Usually while the show is going on, depending on what song it is, we are backstage dancing. During "Hell No" we are all doing the song with her off stage. We enjoy each other's work so much, we cant help but emulate it. I know Cynthia's whole "I'm Here"—everything she does, every single movement. One day we videotaped it backstage and showed it to her. It's a full family affair over there.

2. Scottsboro, Les Miz, & Color Purple are all such heavy shows. What comedy are you dying to do?!
Man, I haven't thought about that for a while. I think if I do a comedy I want it to be a play. I haven't done a play in so long. Or one that is on my mind and I don't know when it's coming but I know they are writing it—Blazing Saddles. I really, really, really want to do that. The moment they announced it, I was like, 'How can I get into that?!' That's high up on the list. And definitely Book of Mormon as well. I think that's hysterical.

3. Like The Color Purple, Les Miz was such a dream cast; which of them do you really want to work with again?
I know I'll give one name and they'll all kill me. They have all influenced my life so much; it's really hard to pick just one. Ah, I'm going to go with Andrew Kober. He's got this demeanor to him that is one of the funniest things in the world. He's so dry and so funny and so productive. He's a work horse of the theatre to me.

4. You graduated from AMDA and hit the ground running. What advice would you give to young performers who are hungry to work right out of school?
Just be yourself. The people in the room want to see you. They don't want to see you emulate someone else's version or make up something that doesn't fit with your body or your spirit. They want you to be you. You're the only you that exists. It's a hard life lesson to learn and it's difficult for people to do sometimes, but being yourself is the primary thing for me. It's what people see when they walk in the room and what they will work with when they start rehearsal.

5. What TV show do you love so much you want to join it?
Well Breaking Bad but it's not on television anymore. (It's the most incredible thing I've ever seen on television.) Something that's on television right now? Easily one of The Walking Dead series. I'm a massive, massive zombie fan—I love horror films too—and I love that show, the writing, the way it's filmed, everything about it. It would be a dream come true from a childhood perspective to be on a show about zombies.

The Color Purple
Hot
Best Priced Tickets
Newer
Hot Clip of the Day: Rock Out with Those Unbelievable Tykes from School of Rock
Older
10 Contemporary Musical Theatre Songs You Should Be Listening To
Sign up for BroadwayBox Discount Alerts