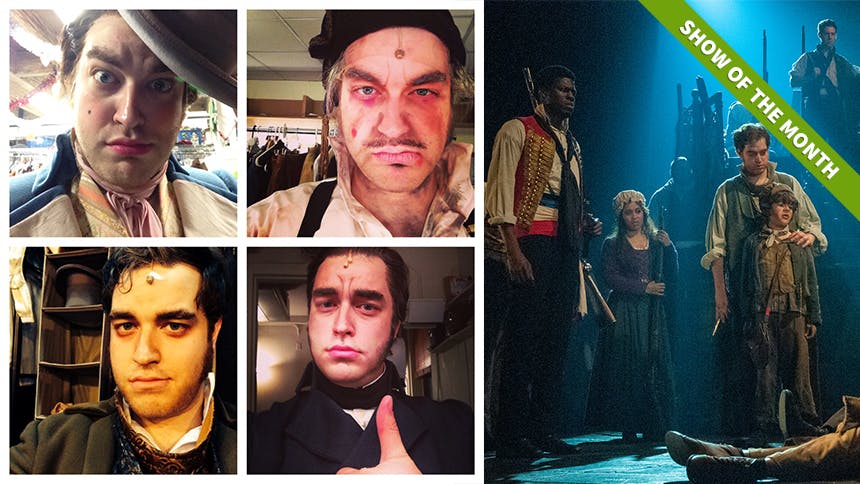 There’s no way to see March’s Show of the Month, Les Miserables, and not be taken by newcomer John Rapson. The Michigan native makes his Broadway debut as the duplicitous Bamatabois (the abusive John who screws over Fantine) and lovable barricade boozehound Grantaire. It's quite something to see his total transformation and how well he brings to life these two very distinct French gentlemen. Below, BroadwayBox catches up with Rapson to talk hypothetical Les Miz tattoos, signature drinks and his Twitter bio.

No no, I’m kidding.
I love the line “Let the wine of friendship never run dry.” It’s not just beautiful writing but it also nicely sums up a 4+ year experience that has introduced me to so many of my best buddies. Just for the record though, I’m not getting a Les Mis tattoo.

2. Someone walks up to a bar and orders a John Rapson’s Grantaire, what are they drinking?
A Fort Washington Flip: Applejack Brandy (a favorite of both Grantaire and myself), Benedictine (herbal spirit from France that’s been around since my man Mr. G was drinkin’ his way through the barricades), maple syrup, and an egg for showmanship (trust me, it’s tasty). It’s a really cool, rich and complex cocktail.

You could also take the dregs from all the drinks at the bar and pour them into a glass and hope for the best. I think Grantaire would be fine with that.

3. Craziest story from my summers at the Wagon Wheel Theatre in Indiana:
Performing in the round is one of my favorite things I’ve ever done…but it DOES present a challenge or two. Wagon Wheelers are all very familiar with “the fever”…the mind numbing feeling after a dance number where you’re so turned around that you’re not sure where the heck you are on the circular stage or which of the four exits to take.

Perhaps this was best demonstrated when after a rousing rendition of the title song in Guys and Dolls, Nicely-Nicely (yours truly) confidently bolted offstage onto what he thought was the right exit ramp and crashed headlong into the Save-a-Soul mission band. The combo of the bass drum, tuba, leading lady and I made one helluva noise.

4. Three ways I’m like Frasier (thanks Twitter bio):
A certain sort of mid-Atlantic speech pattern that occasionally makes people think I have an English accent.

A respect for arts and culture and a glass of gentlemanly spirits.

An occasional streak of uptight insecurity that often manifests in really bizarre Frasier Crane-ish ways much to the amusement of my friends and colleagues.

Cry: The Green Mile and pretty much any Pixar film turn me into a complete mess.

6. Best performance by a dog in TV or film:
Gotta go with Soccer the Jack Russell Terrier, star of Wishbone. His Ichabod Crane and Ivanhoe have yet to be bettered.

7. Best piece of advice from this Michigan native about surviving winter:
Never underestimate the value of a solid scarf. Also for the love of God, get the heck outta dodge and book some vacation time down south.

8. One redeeming quality about Bamatabois:
STYLE. This man-about-town knows how to dress to impress the ladies of the night of 1823.
….whom he then mercilessly abuses……
……yeah, he has no redeeming qualities.

10. One book that rocked my world the first time I read it was:
I just finished a totally extraordinary book by Sarah Waters called The Little Stranger. Incredibly beautiful writing and scary as hell (in an really subtle way), I can’t wait to read more of her stuff.

A few more (Les Mis is 3 hours long…I have a lot of time to get my world rocked by books backstage):
Cat’s Cradle by Kurt Vonnegut
11/22/63 by Stephen King
The Year of the King by Antony Sher
The Amazing Adventures of Kavalier & Clay by Michael Chabon
And The Legend of Sleepy Hollow by Washington Iriving…my all time favorite.

Head over to the Imperial Theatre to see John Rapson in Les Miserables.