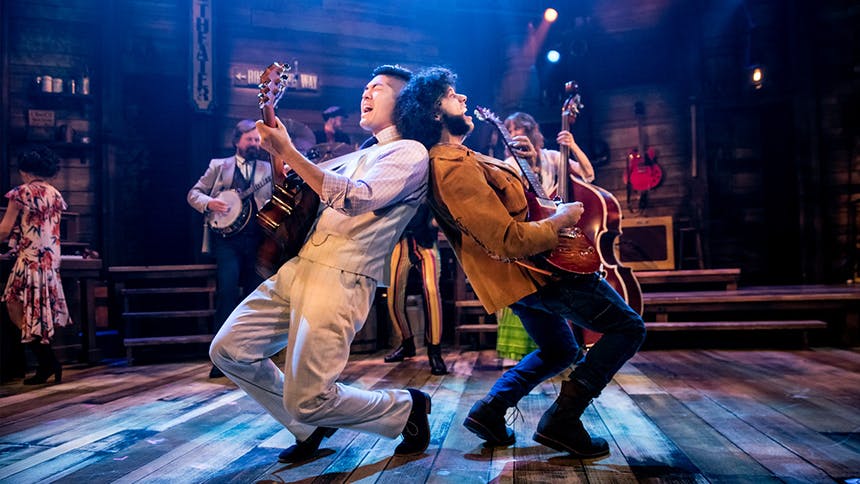 Something remarkable and rare is happening downtown at the Minetta Lane Theatre; audiences are actually up and dancing in the aisles. Yes, the old advertising trope is actually true at Red Roses, Green Gold, a musical featuring the famous Grateful Dead songs of Jerry Garcia and Robert Hunter. This crowd isn’t waiting until the encore either. The crowd is up, cheering, and dancing throughout the show, and it’s pretty wonderful to feel that energy in an off-Broadway theatre.


Red Roses, Green Gold concludes its off-Broadway run on February 18, and here are just four moments worth truckin’ it to the West Village to see live.

The musical’s pair of young lovers—the tomboyish bandit Melinda Jones (big time belter Natalie Storrs) and her educated, clean-cut beau Liam Alexander (the charming David Park)—perform a dance to “Alabama Get Away” that elicited full-out gasps and praise hands. It was a moment of awe—these two can sing, act, play their own instruments and dance like that?! Then the pair do a sweet, acoustic “Box of Rain” later in the show that really drives home their versatility as performers.


Red Roses, Green Gold is full of these big musical moments, with intricate lighting and everyone on stage just truly jamming out, so when the stage clears and Maggie Hollinbeck & Scott Wakefield sit down to perform “Ripple”, it feels so special. This big show becomes wildly intimate suddenly. TBH, the entire show benefits from Maggie’s grounded performance as the gang’s mother figure, Miss Glendine. Just beautiful.

The Breakout Performance by Michael Viruet

Los Angeles singer/songwriter Michael Viruet makes his New York debut in the show as the family’s bad seed Mick Jones, and his performance is quite something. He has the charisma of a rock star up there, especially during his big musical numbers, “Truckin’” and the uber-athletic showstopper “Bertha”. I hope this quadruple-threat talent sticks around after the musical’s run comes to an end.

Lord knows a killer encore has become a staple for the jukebox musical (who didn’t live for Mamma Mia or On Your Feet’s big megamix?!), but this musical rotates the encore, with the company playing a different Dead song each performance. The result is nothing short of a jamboree. The actors onstage look like they are living their best lives and the audience loses their minds—the encore turns into a concert event! I left wishing the encore was recorded and preserved in its entirety because it felt like such a radical, singular theatrical experience.