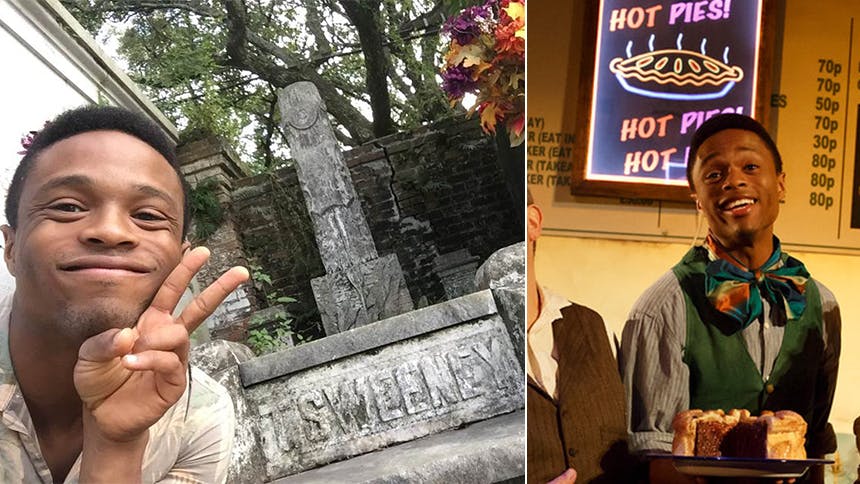 John-Michael Lyles delivers a breakout performance as Tobias in the hit off-Broadway revival of Stephen Sondheim and Hugh Wheeler's Sweeney Todd. He previously appeared off-Broadway in The Flick, Brooklynite, Jasper in Deadland, and Encores! 1776. Get to know John-Michael as he talks with BroadwayBox about interacting with downtown audiences, creating his own music and the outlet that provides, and a disastrous audition memory.

3. What do you love most about sharing the stage and “Not While I’m Around” with Carolee Carmello:
Despite Carolee’s prestige and unprecedented talent, she makes me feel unquestionably safe on stage with her. In our scene together, I feel supported and liberated to explore the far corners of the moment, which is a thrilling opportunity to have 8 times a week!

4. What do you love about working Downtown as opposed to Midtown:
Downtown is where it’s at!! The avant-garde risk of it all! First of all, the West Village is gorgeous and reeks of culture, and the theater itself is so deliciously small and allows an experience for us and the audience that is physically impossible to recreate on a Broadway stage.

5. How did you first get into writing your own music:
I bought my first guitar when I was 12, and being a gay black boy from Texas, I had plenty to sing about!

6. What’s the greatest challenge and reward of creating your own music:
The greatest challenge of writing my own music is maintaining a sense of lyrical truth and melodic honesty, and resisting the urge to compare myself to such NYC legends as Lin-Manuel Miranda & Sondheim. The greatest reward, however, is the ownership of an artistic outlet that is fully my own, a creative solace that is free of auditions and callbacks and contracts.

8. Tell us your most memorable audition story:
Once upon a time, I auditioned for Choir Boy at MTC, and I was so nervous and green that I forgot the words to "Amazing Grace" and the casting director graciously fed me the lyrics as I fought to maintain consciousness. If Choir Boy ever comes back to New York, by gosh by golly, I will SAAAANG that hymn, word for word and note for note!!!!

Hurry down to the Barrow Street Theatre to see John-Michael Lyles as Tobias in 'Sweeney Todd' through February 25.

Sweeney Todd
New
Best Priced Tickets
Newer
If You Only Watch One Video Today, It's 73 Questions with Liza Minnelli Starring Newsical's Christine Pedi
Older
Watch All the Alan Menken Alums Slated to Perform with the New York Pops in “Part of His World: The Songs of Alan Menken” at Carnegie Hall
Sign up for BroadwayBox Discount Alerts