Five Spring Shows To Be Uber-Excited About 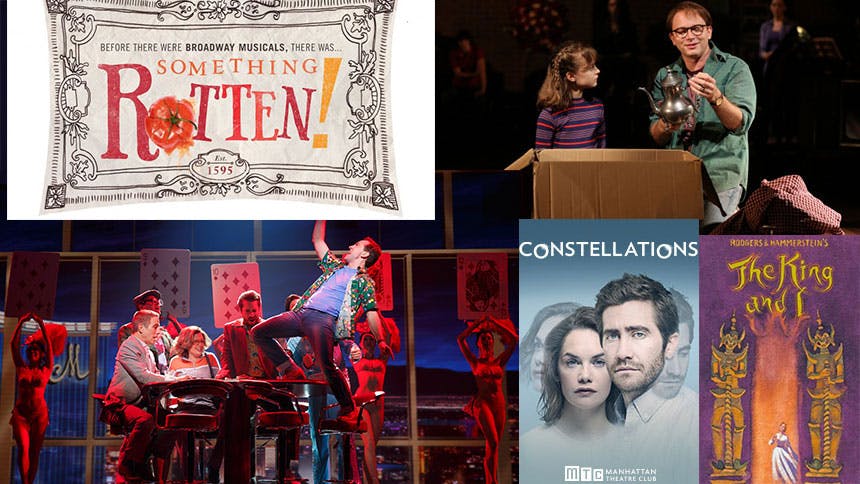 So we’ve spent a good amount of time looking back on 2014, but now it’s time to look ahead to the exciting spring season. Below are five plays and musicals you really want to check out in 2015.


A big hit in London, Constellations tells the story of one relationship across the boundless spectrum of infinite possibilities. It’s a modern love story starring Jake Gyllenhaal, Ruth Wilson and alternative realities.
Now in previews at the Samuel J. Friedman Theatre.


The hottest off-Broadway ticket in recent years, Fun Home finds its way to Broadway this spring with most of the original cast in tact. The adult musical tells the story of a lesbian artist growing up with a closeted gay father and dealing with his subsequent suicide. It’s heavy, yes but it’s glorious and really moving…and probably a front-runner for Best Musical.
Previews begin March 27 at the Circle in the Square Theatre.


In a somewhat dark and serious Broadway season, Honeymoon in Vegas stands out as a beacon of light. It’s old-fashioned fun, very colorful and lavish, the score is sensational and you can bring anyone to it and know they will have a good time. Seriously, go all in on this stage adaption.
Now in previews at the Nederlander Theatre.

The King and I

All you need to know is that Kelli O’Hara is playing Anna, Ken Watanabe is the King, Tony winner Bart Sher is directing and the cast includes over 50 people. It’s more than a musical, it's an event.
Previews begin March 12 at the Vivian Beaumont Theatre.

When two brothers in the 1590s go about to create a play to rival Willy Shakespeare, they end up creating the first musical. If buzz is to be believed, Something Rotten! is going to be a colossal-sized Broadway hit (a la Mormon or Producers) so get your tickets early!
Previews begin March 23 at the St. James Theatre.

The King and I
Best Priced Tickets
Newer
Introduce Your Self(ie): 10 Questions with Disenchanted! Breakout Becky Gulsvig
Older
10 Plays, Concerts and Musicals Worth Braving the Cold for in January
Sign up for BroadwayBox Discount Alerts