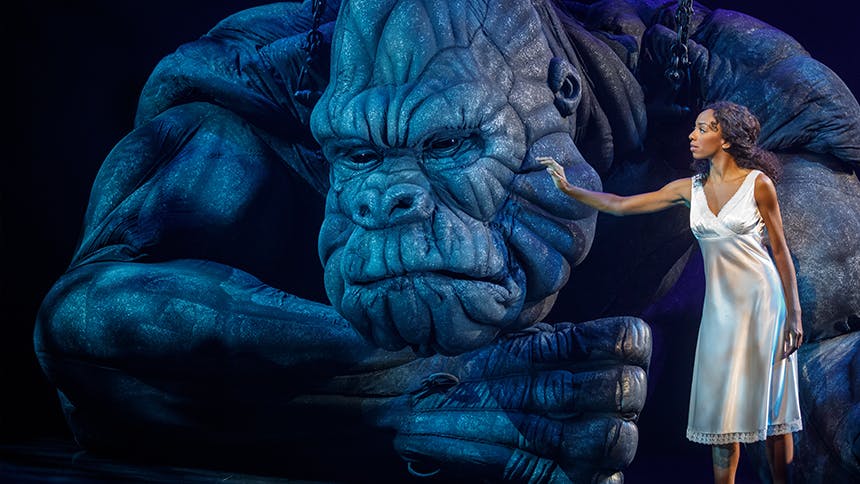 is a theatrical event all its own, and here are five reasons why I would tell anyone to go to the Broadway Theatre and experience it live.

The former star of Broadway’s A Bronx Tale has to be the first reason listed because, while the puppet is impressive, she carries this show. Christiani delivers a beautiful, moving, and fiercely sung performance as Ann Darrow. There was no way to watch her and not see an absolute star. I was beyond captivated by her journey as a strong woman trying to make it in 1931 New York—feeling caged and misunderstood and used, just like the beast Kong. The puppet is worth the price of admission (and you’ll leave talking about it), but when I think of King Kong on Broadway, I think of Christiani’s big prologue about trying to make it in NYC or her reaction to seeing beautiful dresses in her wardrobe for the first time or that emotional, desperate final scene with Kong on top of the Empire State Building. Kong may be king, but, make no mistake, Christiani is queen.


Video does not truly do justice to the magnitude of seeing this puppet live. Randomly, he has such soulful eyes that pet owners in the audience are sure to make a connection to their own beloved animal. When he roars, the sound design makes sure you feel it in your seat. He is the eighth wonder. The scope of the puppet made me question the magic Broadway was capable of putting onstage, in much the same way Cursed Child did. The puppet’s final 20 minutes or so are 100% worth the entire evening.

I found myself recommending King Kong to a friend who had never seen a musical before and to an international acquaintance who has difficulty with English because this is a production that anyone can go to and leave feeling as if you saw something you had never seen anywhere else before. Whether it's the experience of the boat to Skull Island or Kong climbing the empire state, there’s a cinematic element to it that the average person can grasp onto. I truly hope the show takes off with tourists in a major way.

4. The Amalgamation of Old & New

The musical has a score and choreography that feels very modern and a book and design that feels quite period, and I think this blend works for the show. As a classic movie fan, I enjoyed that the book and the performances felt a lot like an old MGM movie. It grounded it back in 1931 for me. The cast also feels and looks like the New York I know every day, and I like that. Having an Ann Darrow who isn’t a blonde bombshell and who, as a black woman in 1931, has a lot more to lose if this stunt doesn’t work out, adds an extra layer that’s never been in this story before.

I don’t remember laughing as much during any other King Kong as I did during this one. Christiani’s Ann lands some great laughs. Casey Garvin’s scene-stealing “fake Carl” in the play within the play is truly a delicious comedic performance. Then there’s a moment when a freshly escaped Kong starts picking off chorus girls one by one and it was LOL funny. It’s nice to see that King Kong doesn’t take itself so seriously and, that in the end, they want the audience to have some fun with it.