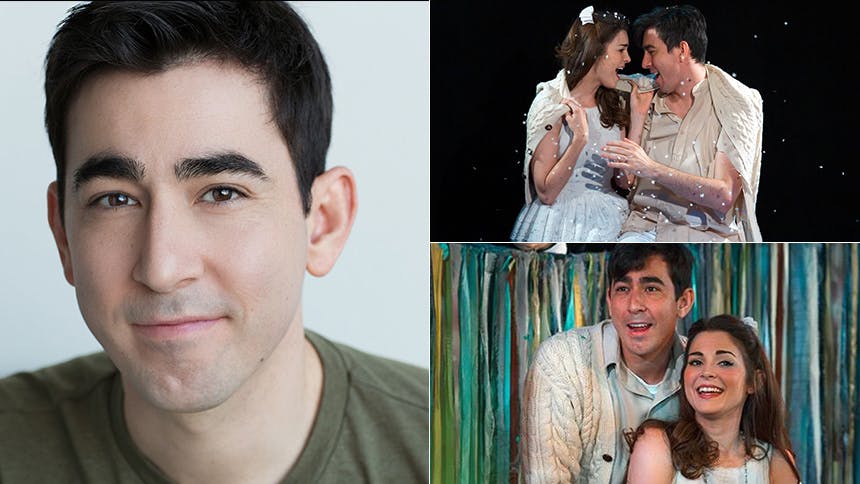 Max Crumm won America’s hearts and votes as Slacker Danny in the Grease reality completion. Since then, he’s appeared in the film Easy A, the webseries Wallflowers and the off-Broadway musicals F#%king Up Everything and Disaster! This week, Crumm is pulling double duty as the romantic lead Matt in the world’s longest-running musical The Fantasticks and as a nearly naked guest performer with The Skivvies at 54 Below. Below, we chat with Crumm about universal love themes, opting for the onesie and his dog, who might be Geena Davis.

1. Let’s start with The Fantasticks. What do you find to be the most true aspect of the iconic love story told in this musical?
I would say most of the time people go all the way around the world just to find out they have what they were looking for. It’s such a universal story. A kid who thinks he needs his security blanket to be brave, only to find out it was inside him the whole time. And that's sort of like the love story between Matt and Luisa. He goes out into the world and does all these things and then realizes being back home with Luisa was truly where he was the happiest—that’s where my love is. That’s the truest thing for me in it.

2. Speaking of your love, what did you and Taylor Trensch do for Valentine’s Day?
We performed at that concert together, but we are both just so busy right now that we haven’t done anything yet. With our schedules we never have a night together. [Trensch stars as Christopher in Curious Incident.] We are going on a date night tonight actually. He’s planned something and I don't know what we are doing yet.

3. Alright, you’re going to be performing in your skivvies on Friday night at 54 Below. Did you get any advice about what to do?
The thing is this time around, I was like, ‘Guys, I am not comfortable being in my underwear right now.’ Because they are so fit. So they are letting me wear an adult onesie on stage. Those are my skivvies.

4. Let’s talk about your dog. If you had to cast your five-year-old lab Birdie as a person, what do you think her personality is?
Geena Davis. She would be Geena Davis in Beetlejuice and A League of Their Own, definitely. She’s just such a strong woman; she’s your best friend but also kooky and wacky. And she has curly brown hair.

5. What’s an album you’re listening to that all of us should be listening to?
Right now, I’m listening to Danny Elfman’s soundtrack to Edward Scissorhands a lot—I just love it. I listen to that and Tom Petty and the Heartbreakers all the time. And also It’s The Girls by the Bette Midler. Those three, all. the. time.

See Max Crumm in 'The Fantasticks' at the Snapple Theatre in Times Square or singing mash-ups with The Skivvies at 54 Below on February 20.

The Fantasticks
Best Priced Tickets
Newer
20 Rare Photos You Need to See from Black Broadway: African Americans on the Great White Way
Older
Jessie J Takes on Love, NYC & Showtunes: It's All In the Set List with Tal Yardeni