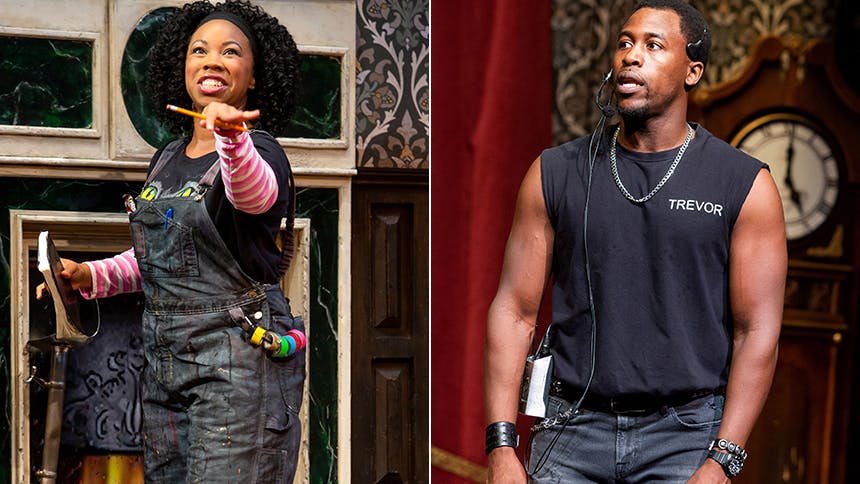 . The dynamic duo are the first people audiences meet as they walk into the Lyceum Theatre, where Toccarra and Jason are already in their LOL, interactive pre-show prep for the play within the play. Then as the events unfold, Annie reluctantly and hilariously takes over for the leading lady, and Trevor deals with the countless disasters as they arise.

Toccarra Cash & Jason Bowen in 'The Play That Goes Wrong'


Scroll on as we get to know both Toccarra and Jason as they talk about making their debuts, horrible onstage mishaps, and why life backstage is just as funny as what's happening onstage..

What was your favorite part of the unique audition process for this show?

Toccarra:
I absolutely loved the moment in my audition when Matty (Matt DiCarlo-Associate Director) told me to let “the episode” evolve into “something you love” or “something that makes you happy.” I was already having more fun with this audition than any audition I’d ever done, so I knew I was about to have a blast because I most definitely was going to dance, complete with old-school hip-hop dances, Michael Jackson moves and all. And so, I did. And we all promptly fell out laughing when I was finished.

Jason:
I liked the fact that actors from the show were actually in the room as readers. I didn’t know they were in the show at the time, but when I met everybody the first day it was nice to feel like, “Oh, I’ve already acted with you!” I was automatically more comfortable.

What was your reaction when you found out you’d be making your Broadway debut in The Play That Goes Wrong?

Toccarra:
Oh my God…I literally burst into tears in the middle of a Flatbush Ave. sidewalk in Brooklyn. I was on my way to the train, headed to an audition, and when my manager’s name lit up my phone, I knew it had to be good news, because she was on her honeymoon, and there’s no way she was going to interrupt her honeymoon to call if it wasn’t good news. So, I kind of knew before I answered the phone and was already starting to tear up by the time I said hello. I called my boyfriend immediately and was crying so hard, I could barely get all the words out…lol. I’ve been in this city as an actor working toward this for 10 years, so I’ve never had a more emotional, exhilarating moment in my life. I’ll remember it forever.

Jason:
“Mama, I made it!”.  It was nice to finally be able to give that news to my mother so she could brag a little bit. Haha.

Tell me about a night at the theatre you’ve laughed until you cried.

Jason:
I’ve never cried at the theatre, to be honest.  The Play That Goes Wrong definitely brought me close when I first saw it though!

What’s been your worst onstage mishap in any show ever?

Toccarra:
I was in a production of A Christmas Carol at Kansas City Repertory Theatre, and I had developed a vicious flu. But I was trying to push through it because we didn’t have any understudies. During the Fezziwig party scene, I was mid-dance number and felt like I had to vomit. Actually, I knew if I didn’t get off that stage in some way, I was going to hurl right there on the stage. So, my dance partner and I (bless his heart) started making up dance steps to get me off the stage—the moves were horrible…lol. I was throwing off everybody else and it was just a domino effect of awfulness. I eventually danced offstage and threw up in a garbage can right in the wings. Such a shining moment for me.

Jason:
I almost slept through one of my entrances. I was playing Asagai in A Raisin In The Sun at The Huntington Theatre in Boston. Anybody who knows that play knows that Asagai is in like two scenes with a VERY long break in between. I went to my dressing room and decided to just rest my head for a minute. Next thing I knew, I heard a line over the intercom that I used as my cue and that’s when I realized I was actually sleeping! I wasn’t even changed yet. I jumped up threw my clothes on faster than I ever have and booked it to the stage (which was on the opposite side of the theater from my dressing room). I literally just made it. Afterwards, the actress in the scene with me was like, “Why were you so sweaty?”  Haha

What do you love about this company? What makes it special?

Toccarra:
I just ADORE this company, mostly because they have me dying laughing on the daily — whether we’re backstage, onstage, on a text thread… they are just some of the funniest people I’ve ever met. But what makes them super special is how immensely supportive they’ve been since I joined the company. They knew how daunting it was coming in as a replacement for such a zany, potentially dangerous (lol) show in such a short amount of rehearsal time, and they expressed how much they had my back, and they truly did… and still do. We all have each other’s backs, because it’s the kind of show that depends on that.

Jason:
The fun of the play definitely carries over to backstage. I just really enjoy coming to work and knowing that I’m going to get to laugh just as much offstage as the audience is going to while watching the show.  Everybody’s in the company is cool and welcoming.  We have a lot of fun.

What is your favorite part of audience interaction during the play’s pre-show?

Toccarra:
Oh, hands down it’s when I…well…I don’t want to spoil it for someone who hasn’t seen the show yet, because they may be included in my favorite moment. ;)

Jason:
My favorite part is all the people being so surprised at the fact that there’s a dog running loose.  Some people get really concerned. It’s kind of hilarious.

The Play That Goes Wrong
Discount up to $16
Newer
Cracking the Code: Tony Winner Lindsay Mendez Shares Insight Into Her Characters from Carousel, Dogfight, Wicked & Godspell
Older
Heather Lind Takes on Seven Questions about Broadway's The Nap, Shakespeare Dream Roles, and the Joy of AMC's Turn
Sign up for BroadwayBox Discount Alerts