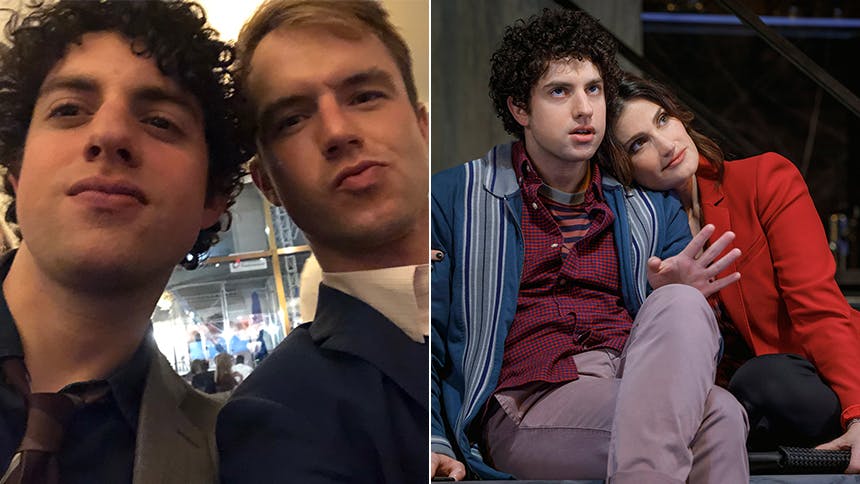 . A member of the Ensemble Studio Theatre, Eli previously appeared off-Broadway in their productions of How My Grandparents Fell in Love and Ruth.


BroadwayBox caught up with Eli to talk about the incredible and specific physicality he brings to his character, the genius of Josh Harmon's writing, and the joy of backstage life with Idina Menzel.

1. What was your first thought after reading Skintight initially?
There are a couple long passages devoted to posing for photographs/ looking at a whole album of photographs that the audience can't see. I'd never seen that on stage before and it was fascinating to me. Just the simplicity of that construct: showing these characters getting their picture taken, the theatricality of that, the vulnerability of it—and how Josh took the time to live in that moment. It’s such an ordinary thing, but in the play it becomes charged with the question of what survives vs. what gets lost. And that long scene with the photo album, how it plays on the themes of personal and familial history—what is shared and unshared, known and unknown—with the audience looking on as an outside observer. It ties in so beautifully to this play that casts the intersection of time and image/identity as a source of dissonance and alienation. I thought it was so cool that Josh was almost pushing the boundaries of what is “watchable,” and still able to conjure so much meaning with these ordinary moments. I was excited to find all of that in the play and bring it to life. And I just generally loved that Josh was hiding these deep ideas below the surface, in a play about superficiality.

2. What do you love about Benjamin?
What I love most about Benjamin as a character is what I love about all of Josh's best characters—Daphna in Bad Jews is the one that immediately comes to mind—and that's how fully he as a writer allows them their flaws. When I first read Skintight, I was actually concerned that Benjamin might come off as unlikable and wondered how that would serve the play. But I discovered that Benjamin is actively struggling with being unlikable, and that simple fact makes him endlessly relatable. We all struggle with being unlikable, and Josh is radical in how mercilessly he allows that struggle to happen onstage without intervening.

3. What advice would you love to give to Benjamin?
Honestly, I don't think he'd listen to much I have to say right now. But the play is set in 2014, and I feel confident that by 2018 he's living in a world beyond his own personal struggles and grown into a more enlightened person. I actually imagine that by now he's even beginning to channel his disillusionment and leverage his privilege towards making the world at large a more equitable place. He's a very smart guy and he has a good heart, and the past few years—traumatic as they’ve been—have served as an important awakening for anyone who fits that bill.

4. What was finding the incredible physicality of your character like?
The first clues are always in the writing. When I auditioned for the role, the sides included Benji's monologue about hot boys in high school and their dads. I tried to start from a neutral place and read through that chunk out loud a bunch of times to find Benji's rhythm and intonation, and that eventually started to inform a lot of talking-with-his-hands behavior. My audition was a waist-up version of Benji; I just sat in a chair. But it was clear to me from the way that he spoke that he carries his body differently than I do, and once I got the part I wanted to establish an early vocabulary for his movements. So, a couple weeks before rehearsals, I started reading all of Benji's lines on my feet, walking around my apartment.

I try to be as organic and free as possible in how I approach performance, but there are a few things that I'll sometimes let myself calculate. I thought a lot about my first entrance in this play. For a lot of reasons, I thought it would be most effective for Benji to have his head in his phone when he comes in, but I wanted to create a fuller picture of the character and his physicality off the bat. I wanted to find a shape that was specific and grounded and striking, and looking down at your cellphone is sort of the opposite. So, I decided to walk in twirling my hair with my other hand. That's been with me since day one, and the hair twirling became a sort of lynch pin of Benji's physical persona throughout the play. I like it because it betrays his deep insecurity, which is an important counterpoint to his outward arrogance when we first meet him.

There was only one time we ever discussed Benji’s mannerisms. It was in the middle of tech. Once we got into the theater and everything had to be louder, I felt like I was losing some of Benji's melancholic dryness and found myself pulling his physicality back a bit to find it again. Daniel and Josh encouraged me to leave it be. We were interested in the dichotomy of these two very different types of gay men on stage— Benji has had the privilege of living in a more accepting time, while his grandfather has spent a good deal of his life trying to bury certain parts of his identity. The inherent generational conflict between Benji and Elliot and their relationship to gayness (and Jewishness, too) is one of the most compelling threads in the play for me. It summons the play's themes of family/history/aging/image/identity/acceptance in a different way, and makes them resonate more deeply. In the play, bemoaning the rift between them, Benji says of Elliot, "I'm like the living queeny embodiment of all his worst nightmares." It's been a lot of fun to lean fully into that characterization as a sort of battle cry against repression.

5. What musical or show was your first introduction to Idina Menzel as a theater artist?
I saw Rent with my mom when I was about eight. I had Sex Ed that year so it was chill. (I went to a very progressive elementary school.)

Idina is the bee’s knees. I have loved every minute with her.

7. Tell us a memorable audition story.
Hmmm. I'm coming up dry. Once I went to shake hands with a casting director and she said she had a cold and I was like OK sorry thanks and then I did the audition but I was nervous so at the end I forgot and went to shake her hand again but then I remembered so I took it away and she kind of went to shake my hand but then stopped and then we just kind of stared at each other and she looked unhappy with me and never called me in again. But that's not a good story.

8. What’s your favorite thing about life backstage at Skintight?
Hearing Idina sing in the shower is pretty surreal.

9. What’s the most interesting or influential thing Joshua Harmon told you about Benjamin?
Josh was there for every rehearsal and every preview, but he never really told me anything about Benjamin. I did check in with him during a break one day and asked if he had any thoughts about what I was doing. He told me with a smile that he was about to give me the most specific note he has ever given an actor. My first line in the play is an offstage "Hello?" For a while I was delivering it in two pitches, and at some point, I guess it became three; he liked the two-pitch version better. It was a tiny thing, but it had a big impact. It's very important to me that everyone feels that there's truly an open line of communication in all directions, and Josh has since told me that he generally avoids giving notes as a rule, so it made me feel really good that he felt comfortable saying something so specific. And the fact that it was all he had to say gave me a lot of confidence that I was on the right track overall. I know that Josh believes deeply in the creation of a play as an alchemical process—that the collaborative nature of theater, in all its various disciplines, is so often the key to its most transcendent moments—and it was very special to feel that kind of trust and excitement from him while I was discovering who Benjamin is.

10. What are three things on your summer bucket list this year?
I tend to be pretty singularly focused. We're on eight times a week through the end of August, so my summer is mostly just about having fun with the show and staying rested. We'll be in front of audiences for a total of three months, which makes this the longest run I've done. Daniel Aukin directs in a way that leaves a lot of room for play and continuous discovery, and that helps keep things fresh. I'm hoping to make it to some other plays on a Monday or Sunday night. Right now, I've got my eye on Pass Over at LCT and Teenage Dick at the Public. Also, really want to catch a screening of 2001: A Space Odyssey in 70mm.