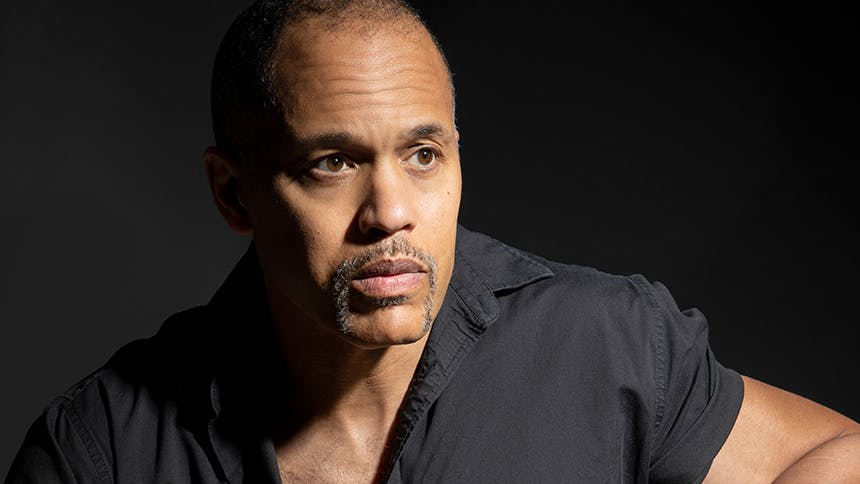 After receiving accolades and awards around the country, playwright and star Keith Hamilton Cobb brings his searing and timely play about Shakespeare and race in America, American Moor

, to New York beginning August 27. Presented by Red Bull Theater at off-Broadway's Cherry Lane Theatre, American Moor tells the story of an African-American actor auditioning for the role of Othello who must respond to the dictates of a younger, white director who presumes to better understand Shakespeare’s iconic black character. A renowned Shakespeare performer, Keith Hamilton Cobb is best known to TV audiences for his roles as Noah Keefer on All My Children, Damon Porter on The Young and the Restless, and Quincy Abrams on Noah’s Arc. BroadwayBox caught up with the multifaceted star to discuss pouring all his emotion into American Moor, the experience of African-American manhood in America, and choosing bravery over blame.

1. How did the idea for American Moor first come to you? What’s your history with Othello?
The play is much more a reflection of a state of being than it is an idea that, all of a sudden, “came to me.” It was born out of a perpetual state of disquiet with the experience of African-American manhood. Othello, the role, and the play, and the real estate that both have occupied in my life are intrinsic to that experience. He has always been there even though I never invited him to be. But it’s not a “Black” thing, it’s an American thing, and to really understand what I’m saying, you’ll need to come and experience the play.

2. What was the first scene you wrote and when did you know you had something there?
I wrote the entire first draft of the play in about a day and a half. It was raw. The energies and experiences that I was needing so desperately to express were sort of vomited out onto the pages in a paroxysm of emotion. This is a problem when a play comes into being this way, because you can’t just hand the public your emotion. You need to make some practical sense of it. Yet, and still, the more I looked at what I had written, the more the raw emotion made the most absolute sense. That had never been the case before. I was sure there was something important to be nurtured. The work remained to be done to make any sort of a well-crafted play out of it, but what was already there, the whole painful, hysterical, absurd, sorrowful, glorious experience, remains the most salient element. If I needed any further assurance that I was on the trail of something valuable, it was when people who saw the play began to tell me that it was their experience as well. Not Black people per se, but people.

3. The themes of this play feel even more urgent in today’s America. How have reactions to the piece changed in the Trump years?
The themes are only “more urgent” now because we are more aware of them in the Trump era. But as we know—if you choose to be honest—nothing has changed. The issues and manifestations of racial bias and racism in America have never been anything but what they are currently. There may be those who are more sensitive to the matters set forth in the play because the flagrant racism in our daily lives is that much more obvious. But what they find in some truly beautiful ways when experiencing the performance is that it is not a play about blame. Rather it is a play about choosing the mutual bravery to shape the future of our American experience.

4. What about American Moor are you proudest of?
I think perhaps “pride” is the wrong word.  I am validated and gratified by having watched, and continuing to watch people from across every racial, sexual, and age spectrum listen intently to this play, speak back to it, return to experience it again, and open themselves up to where its story lives in them. The play changes hearts. I’ve seen it.

5. As an African-American playwright and actor, what conversations do you want to see happening in the theatre right now?
This is a difficult question.  So much of my wish for the theatre is not about the presence of more Black faces and Black voices—although they are certainly under-represented and important to any complete American truth.  As a lover of Shakespeare in performance, my concerns are more about the qualitative condition of our creative work: why we make it, for whom, are we working in good faith and truly for the best good of the American audience that we create for and play to? Are our appropriations of these rich texts handled with skill and integrity?  Bad theatre does no one any good. If we are making theatre that advances the cultural dial towards truth and justice, then yes, I would like to see brown-skinned people present on every level of the creative endeavor. But the conversations that give rise to that are really not conversations that take place on the stage, or within the plays. Rather, the conversations that I would like to see should be happening among professional American theatre makers long before anyone picks up a text or holds an audition. They are difficult and introspective, like conversations about race, but they are essential.