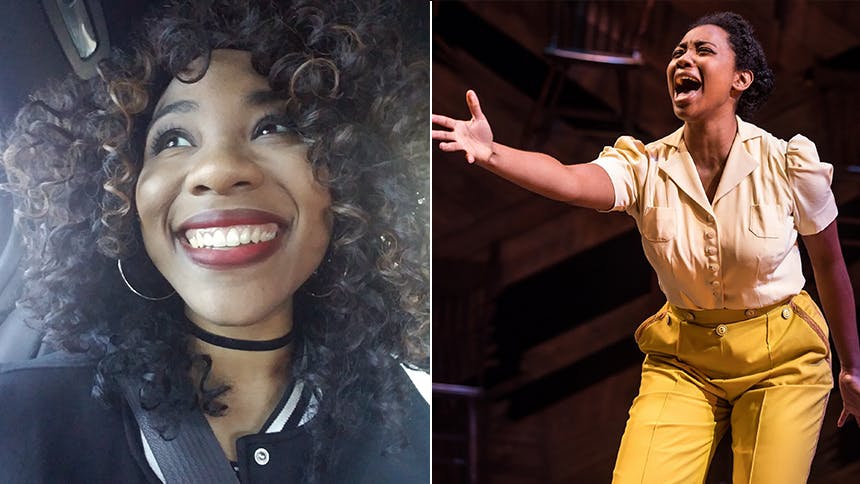 , Adrianna Hicks toured the country as Celie, winning five-star acclaim in city after city. Now, Adrianna brings her Celie to NJ's Paper Mill Playhouse for the highly-anticipated sit down run of The Color Purple (September 26-October 21).


BroadwayBox caught up with Adrianna to discuss tackling this role, her 11 o'clock number "I'm Here", the tour city she fell in love with, and much more!

1. You go on some journey as Celie. What’s your pre-show for The Color Purple like?
My pre-show consists of me doing a physical warm-up by running for 30 minutes in the gym to wake up my body, then I follow that up with a light, but effective warm up while showering (steam always helps, lol). And right before my wig call, I like to stretch out my body while listening to some uplifting music! I just love finding joy in listening to fun, uplifting music while getting ready and, if I have time, I might sneak in a bit of coloring in my adult coloring book before the show too!!! Doing that usually helps to ground me before I enter into the world of Celie.

2. What’s the most important thing director John Doyle said to you about the character?
Gosh, where do I begin?! If I had to pick one important thing that John has told me about my character, it would have to do with direction that he gave me for Celie’s 11 o’clock number “I’m Here”. He encouraged me to remain grounded in the fact that at this particular moment of the show, I am becoming the voice of not just the character and what her journey has represented up until that point, but also how I am a vessel being used to echo the voice of every audience member who has ever been through something that they had to overcome. That was so important for me to learn for that particular time in the show because that really helped me to strip away to the core of what the song, and ultimately, what the show represented in the most authentic way possible. It became about so much more than me.

3. What’s your favorite memory of your time in the Broadway revival?
My favorite memory would probably have to be when they announced that we had won the Tony for Best Revival of a Musical! Talk about a rush!!! Not only did the The 70th Annual Tony Awards hold my very first time performing on the Tonys, but getting to be a part of the win was a moment that I will never forget.

4. If you were going to go back to any tour city for a vacation, which would you choose?
CHICAGO!!! I had never been to Chicago before the tour, but, after spending time there, I finally was able to understand why everyone loves that city so much. Talk about the perfect mix of LA, NYC, and Europe! That unique mixture of the city along with the cultural experience made it place that I hope to explore again soon.

5. Tell us a memorable audition story.
In one of my auditions, the casting company had set up this “red carpet” made of what looked like trash bags for everyone to walk in on before performing. I thought that that was so awkward because it made it difficult for us ladies in heels to walk on before auditioning! Weird, lol.

6. This show is such a major sing. How do you care for your voice?
Lots of rest, water, and really pacing myself has all been my saving grace for singing this show everyday. I also make it an effort to check in with myself everyday to make sure that I get what I need vocally, and if that means not talking for a bit, then I take a break.

7. How do you come down after a performance of The Color Purple?
I usually run back to listening to some easy going music and watching Netflix! I love doing those things after a show.

8. What TV show is your guilty pleasure obsession?
Right now, it is this show called Once Upon A Time. Such a good one!!!

9. Whose voice did you grow up idolizing and singing along to?
I loved listening to Beyonce growing up! Just watching her whole journey with Destiny’s Child into her solo career easily made her someone I idolized at a young age.

10. When’s the last time in your life you thought, “look what God has done”?
Wow, it seems like every second of everyday I think this thought because I am just so grateful for what my life has been so far, both the good and the bad. After coming off tour, I remembered a time waking up on our final performance day with tears of joy over what the last year has been and being thankful for what the future holds. I believe I will be saying, “look what god has done” for the rest of my life.

Paper Mill Playhouse
Best Priced Tickets
Newer
The Awesome Thing About the Ending of Broadway’s The Nap (NO SPOILER!)
Older
Go Backstage with Kara Lindsay for a Two-Show Day at Broadway’s Beautiful: The Carole King Musical