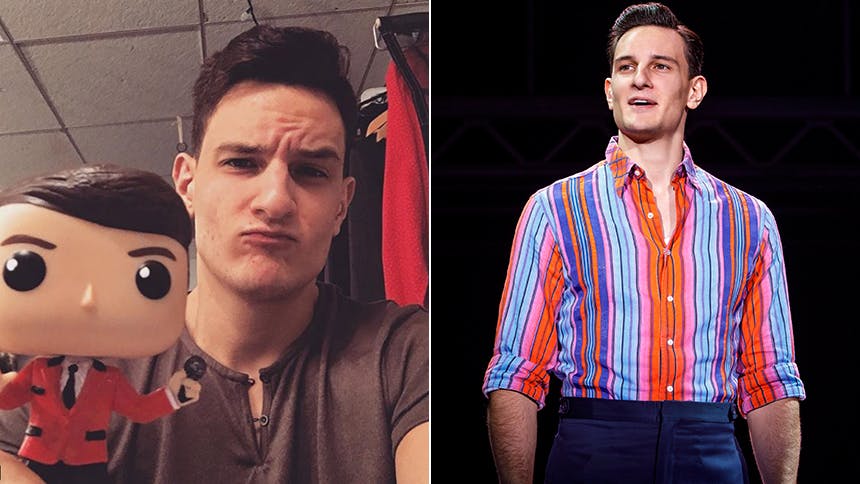 at New World Stages. After graduating from college in 2016, Cory toured with Jersey Boys before opening the musical's popular and intimate off-Broadway run.


BroadwayBox gets to know the rising star a bit better as he talks about all things Jersey Boys, onstage mishaps, growing up a theatre nerd, and the musical he works out to at the gym.

1. Having played this role on tour and now off-Broadway, how do you keep Bob and Jersey Boys fresh for yourself? How has your Bob changed during the years?
Keeping a show fresh for more than a quick month-long run is something that I expected to be extremely challenging. However, I’ve actually found it to be quite easy and I think itʼs that way for a few reasons. The biggest reason is the show itself being so damn good and the script being easy to dig deeper into, even after 2 years. Touring versus New York changed drastically though because we were playing houses with 2,000 to 7,000 seats! Having a 498-seat house (like the show has at New World) was a massive adjustment and honestly made it more enjoyable for my artist brain. Having the house be a bit more intimate made the script come out more like a screen play with a really fun subtlety that just canʼt be found playing to 7,000 seats.

2. What’s your favorite tour memory with Jersey Boys?
My favorite memory has to be when we played Kansas City Starlight towards the end of our leg of the tour. The Starlight is a nearly 8,000-seat outdoor theatre that we played, which was cool in itself, but one night was especially awesome.

We were trying to get through the show before an impending storm came and rained us out. Now remember, itʼs an outdoor theatre. So, toward the end of the show, The Four Seasons stroll downstage during the song “Ragdoll” as they’re inducted into The Rock and Roll Hall of Fame (spoiler alert!) and just as a character says to the audience “...please welcome, my friends and brand new Hall of Famers, The Original Four Seasons” the storm gave out these incredible bursts of lightning that began to light up the sky over the sea of audience members. I got to saunter toward the lightning singing this song wearing a fresh suit and I felt like the biggest boss. Just like, “Sup, Mother Nature? Digginʼ the tunes?”

3. Before booking Jersey Boys, you were a fan of the show. What was your favorite scene as an audience member?
Iʼve been obsessed with this show for a while now and there’s one moment in particular that made me say, “I have to play this role.” Itʼs the moment where the audience first hears the four guys together in “Cry For Me”, which my character sings. Itʼs essentially Bob Gaudioʼs audition for the guys and some of them are very apprehensive about letting Bob in. The song gets to a pivotal moment where the whole band joins in and it just washes over the audience with a sense of “THERE IT IS. Thereʼs that sound that made them famous.”

4. Which scene is more difficult as a performer than it looks as an audience member?
Any. Time. I. Use. Stairs. Thereʼs a spiral staircase and a regular staircase onstage that lead to the bridge of the set. I spend a lot of time running up and down them while looking EVERYWHERE BUT AT MY FEET, which occasionally results in me looking like a baby deer learning how his legs work as I trip and flail all over the stairs...good times!

5. How important is the chemistry between The Four Seasons onstage? Did you guys do anything special to bond?
Itʼs one of the most important parts of the show, in my opinion. If there isn’t a believable camaraderie between The Four Seasons, the whole show sorta rips at the seams right away (as it does without an incredible ensemble). Itʼs funny because I feel as though all of the guys in the show have small cases of what I call “Character Hangover.” This is where, outside of the show, our character sorta bleeds into our everyday personality and that definitely influences our relationships.

And as for creating that bond, a lot of it happens backstage because The Four Seasons share the same dressing room! So, they get my hilarious jokes all the time ;). There was also a time, while we first opened the company at New World, that we did a “Seasons dinner” at a great Neapolitan Pizza joint called Don Antoniom where we just went in on some za and vino and had a grand ole time. Now Iʼm hungry.

6. You also play and write music. What was the first song you mastered on the guitar?
“Redemption Song” by Bob Marley was the first song I figured out and felt like I was actually playing guitar. That one followed by “Overkill” by Men At Work. I still jam to ‘em occasionally!

7. Bob Gaudio was a dream role of yours thatʼs been realized. Whatʼs a dream role youʼve yet to play but are dying to?
Oh god, how much more are you willing to read because I can go on and on and on. For your sake Iʼll keep it to my top 5 in no particular order without Gaudio on there because... well... yeah. Iʼd love to play Guy in Once, Dr. Pomatter in Waitress, Tony in West Side Story, Orpheus in Hadestown, and Eddie Birdlace in Dogfight. Iʼd also love to do any show thatʼd allow me to croon because thatʼs basically how I learned to sing.

8. Tell us a memorable audition story.
Itʼs pretty damn rare that I embarrass myself because I sorta enjoy being a fool, so I canʼt say I have an audition that Iʼve been embarrassed by. Performance? Very embarrassing. I was doing the finale of Jersey Boys and somehow during a dance step just backhanded my microphone so hard that the mic flew into the audience. I then proceeded to get on my hands and knees to pick up the mic stand that had fallen over. So, picture me, a 6ʼ3 buffoon, crawling on my hands and knees to pick up a mic stand while the rest of the company is GIVING LIFE in the finale. But even then, I still thought it was hilarious... even while I crawled around in a suit in front of thousands of people.

9. We first meet Bob Gaudio at age 17. What was Cory like at age 17?
17-year-old Cory was trying to be really cool. He had a big ole mop of hair that, in hindsight, made him look like a Jonas Brother. He was driving his Chevy Cobalt LT that he painted this Rusty Orange color and named it “Pumpkin Spice.” And I was filling every minute of my days with theatre. I was truly the biggest theatre nerd in high school.

10. As a young theatre fan, which cast recordings were you obsessed with in high school and college?
I was, and still am, absolutely geeking out over the original cast album of The Last 5 Years. I remember just being obsessed with Norbertʼs voice and wanting to replicate it but being a pubescent teen, that wasnʼt happening. As I got older and started appreciating orchestrations and analyzing more scores, I really realized even more brilliance behind the show. All of the motifs and the way the tangled stories are told so fluidly just makes it hard to beat. And yet, in college I found more Jason Robert Brown to obsess over when he opened The Bridges of Madison County, which I couldnʼt turn off for about a month after the OBC recording came out. Iʼm also a big music nerd in general so I have a lot of albums in rotation that compete with my OBCʼs but thereʼs always time to jam to Legally Blonde. #ShamelessGymAlbum.