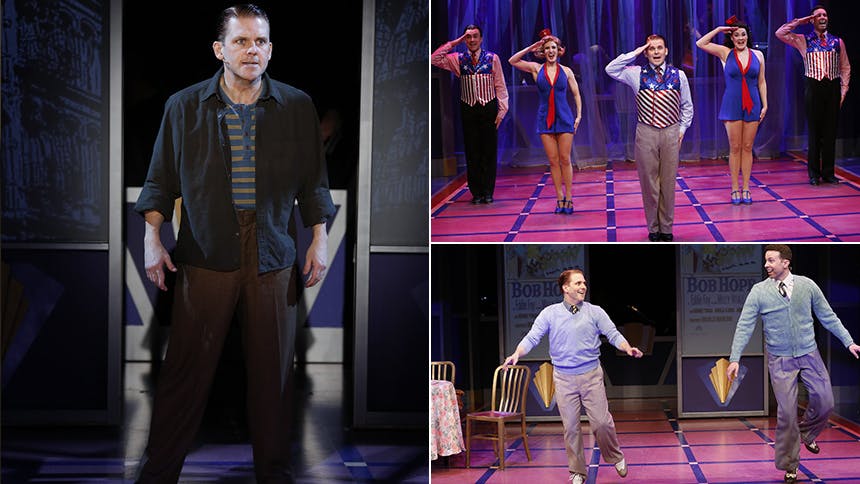 As Hollywood icon James Cagney, Robert Creighton carries the smash off-Broadway musical Cagney on his shoulders and rarely breaks a sweat. The bio-musical is a labor of love for the star and co-creator, and the role is tailor-made to Creighton's incredible talents—as evidenced by his 2016 Drama Desk Award nomination for Outstanding Actor in a Musical.

BroadwayBox caught up with the Broadway alum (whose credits include The Lion King, Anything Goes, Edwin Drood, and Chicago) to talk about leading the long run, what he'd tell future actors playing James Cagney, and what he'd ask the Oscar winner if he could.

1. The musical Cagney will live on and be done regionally, and at colleges and high schools, etc. What advice do you have for future actors playing James Cagney?
Well, James Cagney won an Oscar for playing George M. Cohan, playing a biographical figure that everyone knew. When he was asked “are you going to imitate him”, he said, “I don’t believe in imitation because then you can only do what they did, and it limits your creativity. You take their essence and then you play it for real." So when I went down this road of creating a show about Cagney and wanting to tell his story, I really took seriously his advice and said, “I’m not going to imitate him but I’m going to take his essence and then play it like I’d play any other role.”

The other thing is no one is ever going to be James Cagney. I watched all the movies and read all the books about his life and just let that wash over me; so when you do start playing it, it’s all in you—you know how he moves, how he carried himself, all that.

2. Having watched all the movies, what's your desert island Cagney movie?
I’ve got to take Yankee Doodle Dandy. But it’s closely followed by Angels with Dirty Faces and The Roaring Twenties. Oh my gosh, I watched The Roaring Twenties fairly recently (he made it with Bogart). He’s everything in that—he’s tough, he’s funny, he’s romantic. He’s got such range in that way. It’s terrific.

3. How do you combat a long run? What do you do to stay present in it? How do you stay healthy for a role this physical?
To be honest, if you told me I could do this long of a run of this role when we started, I would have said, “Well, we’ll see...” But as old as I am now, I’m in the best shape of my life. My understudy Freddie Kimmel is a trainer and an unbelievable health coach, and he got me on a vitamin regimen and antioxidants and protein for my joints. Funny enough, my understudy is the one helping me stay healthy. The real challenge is vocal because I have a three-year-old and a five-year-old, so no matter what time I get home I’m up between 7 and 7:15 every day; and, as you know, sleep is the only thing that restores a voice fully.

In terms of staying present in it, for me it’s been a passion. No question about it. It’s in me, and I don’t take for granted that it happened in this way, in a commercial way in New York. I consciously have moments onstage (during say “USO” where I am just dancing and seeing the eyeballs of the audience) where I think, “This is great. I’m doing what I set out to do and it’s happening.” I feel restored when I do this show. I don’t take it for granted.

4. What’s been the biggest joy of this years-long Cagney experience?
For me personally, just the incredible satisfaction that it actually came to fruition has been a great joy. We did it. It went from idea to finding all the people to help make it happen, and then actually happen. That feeling of its existing, and people seeing it and walking out happy, that’s the highlight.
What’s been the biggest obstacle?
The ongoing hurdle is finding the balance that I can endure doing this eight times a week and still be a father and a partner. And because I’m a co-producer of the show too, in the larger sense, the biggest hurdle is visibility—our word of mouth has been incredible. People come and they are uplifted by it. Literally every day people say, “I’m back and I brought friends or family.” But our visibility being off-Broadway is slightly less than it would be if we were on Broadway, so just keeping the word out and getting bums in the seats is an ongoing challenge.

5. What would you ask James Cagney if you could interview him?
He quit making movies in 1963 and he was, in everyone’s opinion, still at the top of his game (he had just finished making One, Two, Three with Billy Wilder). So I’d ask, “Were you really satisfied just leaving the industry completely—just walking away from it—or were there other stories you wanted to tell or other things you wanted to do? Do you have any regrets about not making more films?”