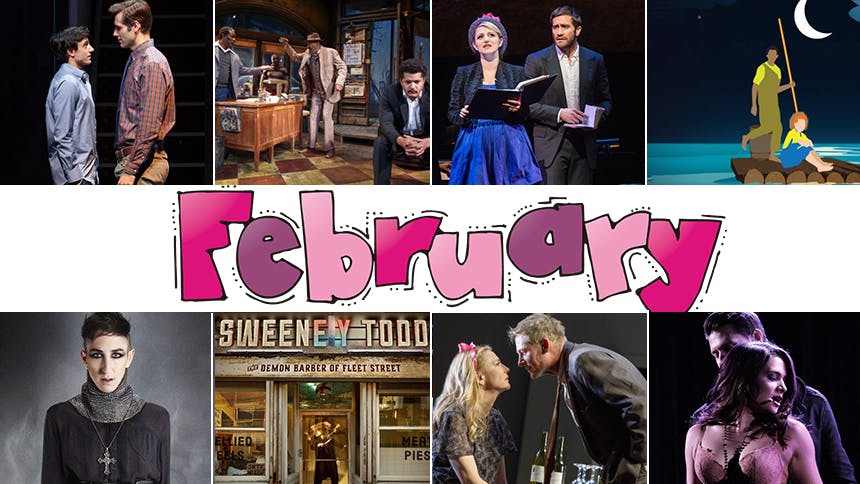 Here are 10 shows you’re sure to fall in love with—get it? ‘Cause it’s Valentine’s Day…

1. Our Show of the Month is Joshua Harmon’s LOL comedy Significant Other

. It’s a must-see show to anyone who has ever navigated a dating app, a work crush, or an awful blind date in the hopes of finding their soul mate. Also, the central performance by Gideon Glick is going to be what everyone’s talking about come awards season. It's going to be one of those plays you want to see more than once.


2. Another play we can’t get enough of right now is MTC’s staging of August Wilson’s drama Jitney

. The production contains some of the most spectacular performances on Broadway right now. That acting at the end of Act One will leave you positively chilled. Celebrate Black History Month with this acclaimed play about gypsy-cab drivers fighting to survive in 1970s Pittsburgh.


3. Let’s call this The Stephen Sondheim Trio. This month, Sondheim fans can fill their hearts with three of his beloved musicals on three different NYC stages.


from City Center to Broadway’s new Hudson Theatre—and fans of this moving musical can’t afford to miss this incredible 10-week engagement. arrives at the Barrow Street Theatre (which they have transformed into a working pie shop) and it’s already one of the hottest tickets in town. See it now with the acclaimed the British leads (Jeremy Secomb & Siobhán McCarthy) then go back in April to see Broadway’s Norm Lewis and Carolee Carmello as Sweeney & Lovett. . Amanda DeLalla, an actress with Asperger’s, navigates this classic fairytale musical as an abridged solo piece with 25% of proceeds going to benefit the Autistic Self Advocacy Network.

. The role won Angela Lansbury a Tony Award and Betty Buckley rave reviews in London, so I can’t wait to see what Tyne brings. Act quickly though because it only runs February 25 through March 5.

6. Those of us who grew up adoring the super sexy teen flick Cruel Intentions

won’t miss the three-performance-only musical parody playing NYC this month. The “pop-up engagement” is billed as an immersive stage experience filled with 90s songs and plays (Le) Poisson Rouge February 11, 13, & 14 only. Is there any other way to spend Valentine’s Day?!

. It’s a huge Australian company of fine actors, and the big, long group scenes that end each act are worth the price of admission alone.

9.Two exciting concerts are happening in NYC on February 6. The first is Broadway Sings Bowie/Prince

at the Highline Ballroom, featuring Corey Mach, Eden Espinosa, Ruby Lewis, Joel Perez, Andrew Chappelle, & more performing the music of the two great legends we lost in 2016. Then at Birdland, Jay Armstrong Johnson debuts a new show filled with some of his favorite showtunes and special guests Alysha Umphress and Chip Zien.


10. Here Lies Love creators David Byrne and Alex Timbers are back at The Public with their new musical, Joan of Arc: Into the Fire

. It’s going to be one of the hottest tickets in town with theatre fans eager to see what this pair creates next.
New Jersey Bonus


This month, Paper Mill Playhouse presents A Comedy of Tenors

, the hilarious sequel to the Tony-winning comedy Lend Me a Tenor. For the madcap comedy about opera singers behaving badly, Paper Mill reunites the original Paper Mill Lend Me a Tenor cast, including David Josefsberg, John Treacy Egan, Ryan Silverman, and Jill Paice.

Sunday in the Park With George
Best Priced Tickets