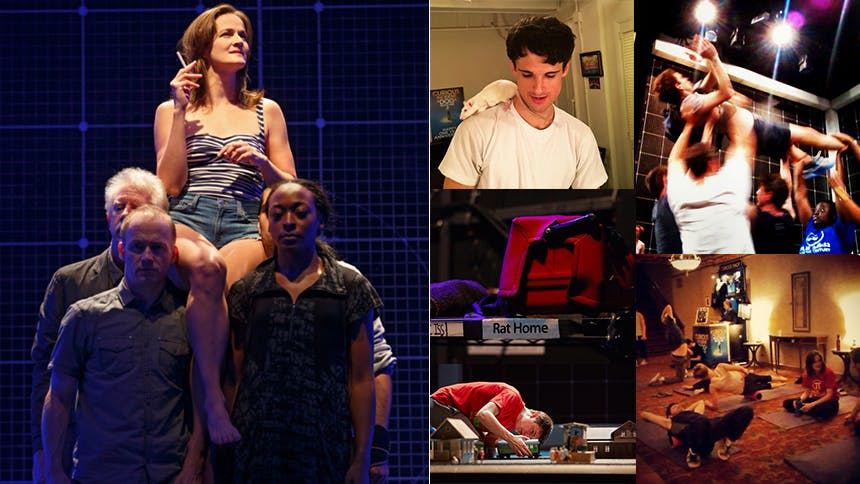 Now in its second smash year, the Tony and Olivier Award-winning The Curious Incident of Dog in the Night-Time still brings the heat to NYC winter. BroadwayBox enlisted the aid of Tony nominated stage and screen star (and OBCer) Enid Graham, who stars as Christopher's absent mother in the hit drama, to tell us 10 backstage secrets fans might not know.

With a show this demanding, it’s great to touch base with everyone before you start.


In forty-five minutes, the room will be filled with patrons sipping cocktails, now it’s covered in yoga mats and planking actors.


Every day we practice our movement—for most of us straight-play actors, the lifting and choreography we do in the show will be the closest we'll ever get to a musical! Watch out, An American in Paris!

Often there is a delightful/frightening display of junk food in the green room. One day we had: sweets brought back from London, donut holes, home-made cookies, jar of jelly beans, Halloween candy basket, and apple pie! Thank goodness for all the planks! (see #2 above).


The difference here from other shows I’ve been in is this is a real rat! ☺

The setting up of the great miniature train line to London begins.... @knucklesandwich @curiousbroadway #curiousincident


They look alike, but each has a different function. Don’t try to guess where they go, only the experts know!

Our wonderful and energetic cast members Richard and David make putting on a hat during quick-change fun. Dora—our glamorous dresser—has an incredible arm for the hat toss.

8. The train set of your dreams

If you ever loved building trains on your living room floor, then this set is a fantasy come true. Of course you’d need a space as huge as the lovely Barrymore stage!

Richard feels he is back in his home-town as he gets drenched every night.


A petrified banana left backstage by the Master himself to fuel his “Stella!” entrance back when A Streetcar Named Desire premiered at the Barrymore. At least this is what we choose to believe. ☺

Now that you know all their secrets, get yourself over to the Barrymore Theatre to take in the splendid, award-winning drama 'The Curious Incident of Dog in the Night-Time'.

The Curious Incident of the Dog in the Night-Time
Best Priced Tickets
Newer
The Flick Star Brian Miskell Gives a Master Class on Film As He Reveals The Five That Rocked His World
Older
Hot Clip of the Day: J Hud & The Color Purple Cast Pushing Da Button on Late Night
Sign up for BroadwayBox Discount Alerts