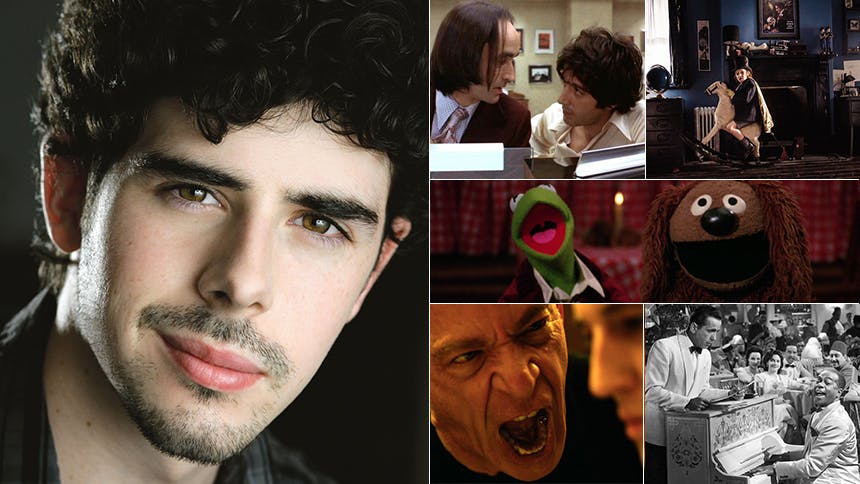 Brian Miskell, who garnered acclaim for his performances in off-Broadway's Afghanistan Zimbabwe America Kuwait, Undeniable Sound of Right Now and EightyThree Down, plays the duel roles of Skylar/The Dreaming Man in The Flick

, an award-winning drama about employees who work at a local Massachusetts movie theatre; but unlike his Flick character, Miskell is not dozing off in the middle of a movie. No, it's pretty clear Miskell is an avid film lover the way he speaks so passionately about the five films that really rocked his world.

Note: Desert Island Top Five lists constantly elude me. Kyle and Danny both already picked some of my favorite movies (as will Nicole, I’m sure), so to avoid repeats, I’m going to say that I’m bringing them and their great taste with me to my desert island.

Another note: These will all contain massive spoilers. Proceed with caution.

Why I Chose It: It’s been my favorite movie for most of my life, and with each viewing, every element delights me and breaks my heart. The iconic performances. The painfully witty dialogue. Sam’s piano. La Marseillaise. Ingrid Bergman’s eyes. But more than anything, I love the story of heartbreak scabbed over, and finding the strength to come out of hiding and face the world. Rick rediscovers the love of his life, and with something to believe in, he transforms from cynic to patriot. He lets her go, to save her life and the cause that she’s fighting for, because, in one of the best lines ever written: “The problems of three little people don’t amount to a hill of beans in this crazy world.”

Year I Discovered It: ‘99? 2000? My parents introduced me to so many classic movies, but after this one turned me into a “rank sentimentalist,” I’ve watched it at least once a year ever since.

Ultimate Scene: At a very early age, the climactic airport scene became my model for true heroism, love, and masculinity based on sacrifice. But this latest viewing, another scene stood out. Pushed to the breaking point, Ilse reveals that she still loves Rick, and the dam finally bursts as their hearts both crack open for the first time in years.

Why I Chose It: Al Pacino is one of my favorite actors, and Sidney Lumet masterfully helmed this tense, sweaty, devastating story of a man fumbling a bank robbery to pay for his lover’s sex reassignment surgery. Sonny Wortzik is no leader of men, but through one desperate act, he suddenly finds himself responsible for the lives and well-being of a roomful of hostages. Lumet estimated that about 60% of the dialogue was improvised or scripted from improvisations, but it never feels self-indulgent. The heightened emotions and desperation in the performances explode out of the film’s discipline and rigor. The balance Lumet strikes with these incredible actors should be the template of great acting in service of story.

Year I Discovered It: I was a 14-year-old obsessed with The Godfather, so I sought this out.

Ultimate Scene: “Attica!” Confronted with a sea of guns pointed at him, Sonny brazenly flips the script and rages against police brutality. As onlookers start to cheer, he struts like Mick Jagger, forcing the cops back and driving the crowd into a frenzy. It’s thrilling to watch Pacino at the height of his powers, but the scene stays grounded because you get the sense that this character has never felt powerful in his life until this moment.

Why I Chose It: A good horror movie has more on its mind than making you jump or grossing you out, and writer/director Jennifer Kent dreamt up what might be the scariest movie I've ever seen. Essie Davis is sensational as a young widow terrorized not just by the creature that goes bump in the night. Raising a very challenging six-year-old on her own, she’s desperately struggling to stay afloat, stay sane, even stay awake. I don't have kids, but its unsentimental depiction of parenthood feels profoundly honest.

Year I Discovered It: 2014, at the IFC Center. Watching a hundred terrified audience members jump in unison was a good reminder to turn off Netflix every once in a while and go to the movies.

Ultimate Scene: The scares build to a fever pitch, but the groundwork is laid when a sinister storybook called "Mr. Babadook" mysteriously appears on the shelf. Quickly deeming it inappropriate for bedtime, Amelia still can't shake the feeling that something dark has entered the house.

Why I Chose It: This movie is a better thriller than most thrillers; a better musical than most musicals; a better sports movie than most sports movies. I played jazz trumpet for years (with a wonderful teacher who never threw anything at my head) and the music transported me. J.K. Simmons is hypnotic and makes Fletcher unbearably magnetic and repellent, but I'm also blown away by Miles Teller’s ferocious, vulnerable work. The first time I saw it, I envied the drive of his character, and even as he became increasingly self-destructive, I wondered how far I would I push myself for my art.

Year I Discovered It: 2014, Union Square. I was very literally on the edge of my seat. When my friend Julian found out I was making this list, he said, “Definitely do Whiplash. I was there, and it certifiably rocked your world.”

Ultimate Scene: The catharsis in the last scene was a healing experience for me. I didn’t go through anything nearly this horrible as a young actor, but I had a couple of borderline emotionally abusive teachers who seemed mainly invested in the thrall of their own power. Even though his defiance gets his teacher’s approval at the end of the movie, Andrew’s not playing for him anymore. I think the movie argues that when all’s said and done, no one can bully you into being a great artist; you have to choose to take charge of your own work and shine. The audience in the theater cheered.

Why I Chose It: The Muppets are old-school musical vaudevillians. They’re irreverent but irony-free, just a troupe of artists trying to put on a show without everything falling down around them. The villain of this movie wants Kermit to sell out his species by making commercials. But the Muppets aren’t headed to Hollywood to be rich or famous; they want to sing and tell jokes and share their talent to make people happy. This pack of weirdoes is everything I was looking for and found in my theatre family.

Year I Discovered It: When I was 8 or 9. Muppet Treasure Island was actually my Muppet movie of choice at the time, but as I got older I returned to this one over and over to uncover new layers. When Rowlf sings to a lovelorn Kermit, “We grin and bear it cause the nights are long,” it kind of went over my head on the initial viewing.

Ultimate Scene: Paul Williams’ songs are wistful and haunting. To me, the aching heart of the movie is the song Gonzo sings when they’re stuck on the side of the road and all seems lost. Once in a while I start a play that’s really special, and as I fall in love with a cast of virtual strangers, I think about the lyrics to this song.

“There’s not a word yet for old friends who’ve just met,
Part heaven, part space, or have I found my place?
You can just visit, but I plan to stay,
I’m going to go back there someday.”


See Brian Miskell in the Pulitzer Prize-winning drama The Flick at the Barrow Street Theatre through January 10, 2016.

The Flick
Best Priced Tickets
Newer
Hot Clip of the Day: Daddy Long Legs' Megan McGinnis Revealing The Secret of Happiness
Older
Enid Graham Reveals 10 Things Fans May Not Know About Life Backstage at The Curious Incident of Dog in the Night-Time
Sign up for BroadwayBox Discount Alerts