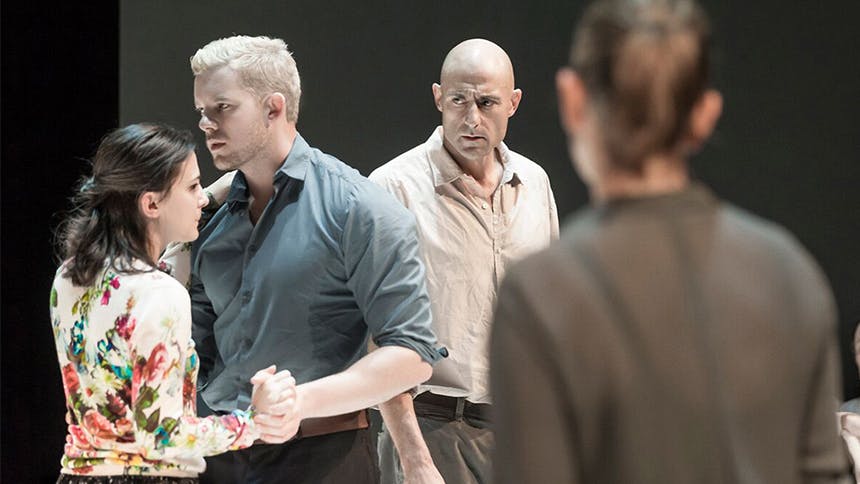 . They can sit in the traditional house of the Lyceum Theatre or they can (and should) experience the acclaimed, award-winning revival from seats onstage.

In the spirit of the way A View from the Bridge was staged at the Young Vic, onstage seats will be situated on two sides of the stage. Your view will be unrestricted and you’ll have a unique opportunity to be right beside the action on stage.

"Beside the action" is an understatement. You’re practically making your Broadway debut beside Mark Strong and company in director Ivo Van Hove’s completely reimagined, stripped down production. Below, BroadwayBox recalls five moments that were beyond exquisite thanks to onstage seating.

1. Alfieri’s monologues to the Audience

As the lawyer and narrator, Alfieri, Michael Gould addresses the audience throughout the show, and each time it's as if he’s talking only to you—as if the onstage seats are the jury in a courtroom. Several times, I honestly forgot there was another audience sitting in the house.

Phoebe Fox is brilliant as Catherine, but one of my favorite moments of hers was this long, silent sequence of Catherine perched, cat-like listening to the action, watching Rodolpho and Eddie, and I’d fear you lose some of that if you were in the house. It’s one of those things that the closer the better. Similarly, sitting onstage offers countless, tiny but vital moments from Mark Strong as he processes the action around him.


Unlike other productions of Arthur Miller’s classic, this A View From the Bridge feels like a bonafide thriller, and one of the most heart-racing scenes is when Michael Zegen’s Marco inexplicably lifts a chair over his head a stone's throw away from you.


It's fast and sexy…and honestly, how far away do you want to be from this?


The big climax of the play—which if you’ve read the reviews you know what’s coming—is so special and spectacular, you want to be as close to the action as possible. Watching the build-up, the moment, and then the resolution from five or ten feet away is worth the price of admission.

See the Olivier Award-winning drama ‘A View from the Bridge’ onstage at the Lyceum Theatre through February 21, 2016.