Heather Lind Takes on Seven Questions about Broadway's The Nap, Shakespeare Dream Roles, and the Joy of AMC's Turn 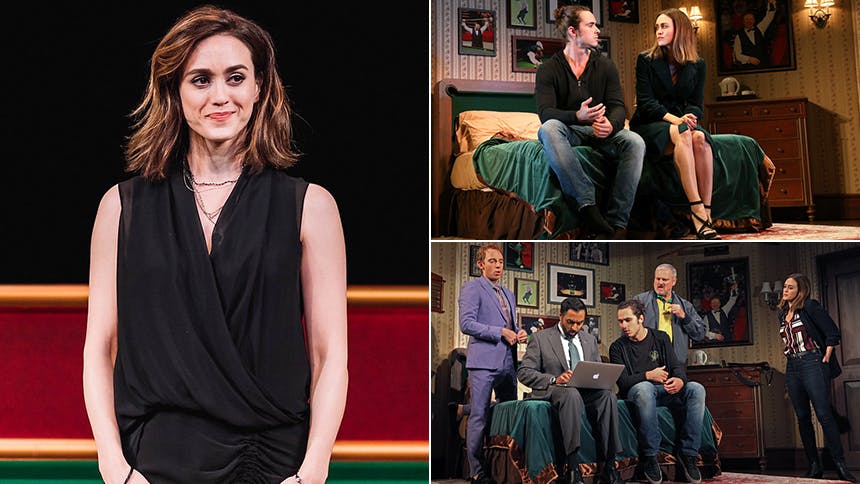 . Produced by Manhattan Theatre Club, The Nap is a hilarious look at the world of snooker and the shady underground characters that stand to profit off of the championship.


BroadwayBox caught up with Heather to talk about her complex character, co-starring on AMC's series Turn, and her dream Shakespeare role.

1. Without giving away any twists and turns, your character is so many things all at once. Where did you start with her when you began building this?
I began working on my character Eleanor chronologically.  I knew that there were layers to her so I decided I needed to "peel" them back from the beginning.  It was important for the play that she be believable at the start, and I wanted to find that persona as purely and simply as I could before going further.  I have great respect for the people we sometimes PRETEND to be; they always have very compelling motives behind them and Eleanor is no exception.  Once I felt strong with that cover, I allowed myself to unearth her more authentic self, and that subsequently helped clarify her disguise.

2. What’s the biggest challenge with a character like Eleanor?
The biggest challenge with playing a character like Eleanor has been when and where to slip up, as all humans do, and how much of her secret self is revealed in those imperfect moments.  She walks a fine line between a manicured authority and a vulnerable victim all the time.  And I've discovered that much of the comedy with her is nestled along that line.  So, I find each night the scenes are more nuanced than I anticipated as I try to find that balance.

3. What’s your favorite small or quiet moment in this fast-paced comedy?
My favorite quiet moment in this comedy happens in the hotel room scene with Ben who plays Dylan.  There's a special quality about a scene between two people late at night in a room together.  When Dylan asks Eleanor what she learned about men when she was working as a dancer, I think the energy in the room changes and the energy between them shifts.  It's subtle, but it feels like that's maybe the first time any man has ever asked her that question.  And I love playing that moment because the rest of the play for Eleanor stems from that quiet trust established between them there.


4. What’s your pre-show like for this? Is there accent work and physical warm ups? Is it the quiet before the storm or getting pumped up?
My pre-show for this play involves a lot of what I normally do to prepare.  I warm up about two hours before curtain with vocal work and breath work.  I use my accents in the vocal warmup to get those voices in my head.  And then I spend about an hour getting into hair, makeup, and costume.  I like to take my time; I hate feeling rushed.  So, it's pretty quiet and focused.  I like silence before having to do something so loud.  But it's also nice to just chat with my cast mates and laugh too because it's a comedy and a lot of the jokes come from a joyful playful energy between us on stage.


5. You made your Broadway debut opposite Al Pacino in The Public’s The Merchant of Venice, and this past summer you starred as Desdemona in their Othello. If The Public Theater is reading this right now, is there a Shakespeare role you’re dying to play but haven’t had the chance to yet?
I would love to play Lady M one day.  I love her strength and power.  I love how she persuades and how she eventually suffers.  I also know there's so much I don't understand about her, and just like Desdemona taught me who she really was when I got the chance to work on her, I'd love Lady M to teach me.


6. For four seasons, you starred as Anna Strong on AMC’s TV series Turn. What was your favorite day on the set?
My favorite day on Turn was one day early on when we were shooting the pilot.  I was not accustomed to working on television and I was nervous.  I was working with Jamie Bell, who played Abraham, and he's so experienced and wonderful.  We were in a barn.  An actual barn.  And it was a very vulnerable scene.  I loved it so much because it had that great combination of preparation and fear.  And because so much of Turn was shot outdoors, it was lovely to get to use the hay and the dirt and the dust in that scene.  I felt like nature was on my side.  And I felt like Jamie and I had known each other for a long time, when really we had only met about a month before.  It's wonderful to work on a set like that when you're accustomed to working in theatre.  So much around me was REAL, and instead of closing down my imagination, it opened it up.  And that scene set me up for the next four years of joy and discovery.

7. The guys play a live version of snooker during the finale of The Nap. What is the final scene like if Dylan doesn’t win?
The final scene of The Nap are the final moments of a snooker world championship, and so anything can happen.  The players have choreographed as much as they can what the outcome will be, but some nights the balls don't go as planned.  So, we just have to play it with whatever eventuality happens, and I have to tell you, sometimes our lead actor doesn't win...it's very suspenseful!