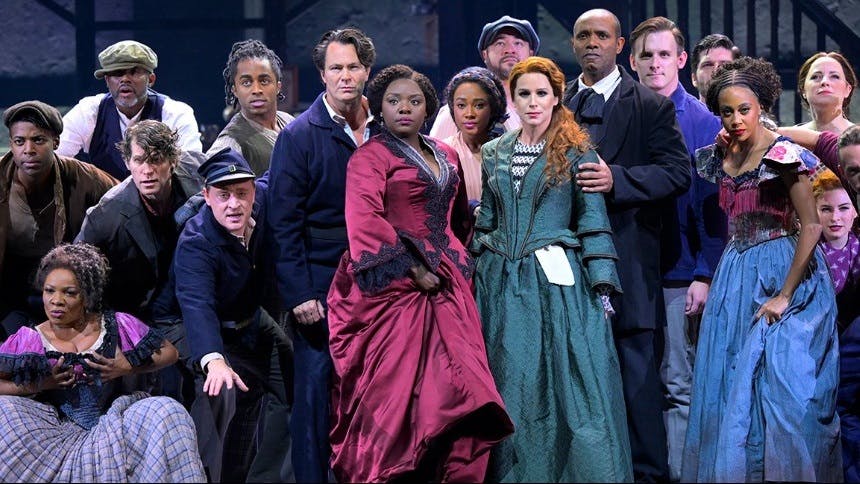 Get ready to learn more about one of spring's new Broadway musicals Paradise Square!


This new musical, set in 1863, takes place downtown in New York City in a section of Lower Manhattan called Five Points. The Five Points area was affordable for the city's newly arrived Irish immigrants and free Black Americans. The housing conditions were unsafe due to damp housing as to the Five Points area was built on water. Regardless, "an accidental society" was created between these two groups of Irish immigrants and free Black Americans.

In the show we meet a number of fascinating characters like the recently freed Angelina Baker (Gabrielle McClinton) who travels to Five Points to find her love Washington Henry (Sidney DuPont), as the couple were separated during their escape from slavery. The saloon not only brings the two communities together but also brought together the two dance styles from both communities to create tap dancing as Washington performs in the musical.

The two groups both meet with unrest when President Abraham Lincoln introduces the first Federal Draft leading to the New York Draft Riots.

The book is written by the trio of Christina Anderson, Craig Lucas and the show's conceiver, Larry Kirwan with music composed by Jason Howland with lyrics by Nathan Tysen and Masi Asare.

Ahead of the musical's Broadway run, enjoy these five music videos showcasing the cast and this new Broadway score of Paradise Square.

Paradise Square
Discount up to $62
Newer
We Love To S-P-E-L-L! A Rewind to The 25th Annual Putnam County Spelling Bee for William Finn's Birthday
Older
Hot Clip of the Day: Nick Blaemire and Van Hughes Sing From Their Show Space Dogs