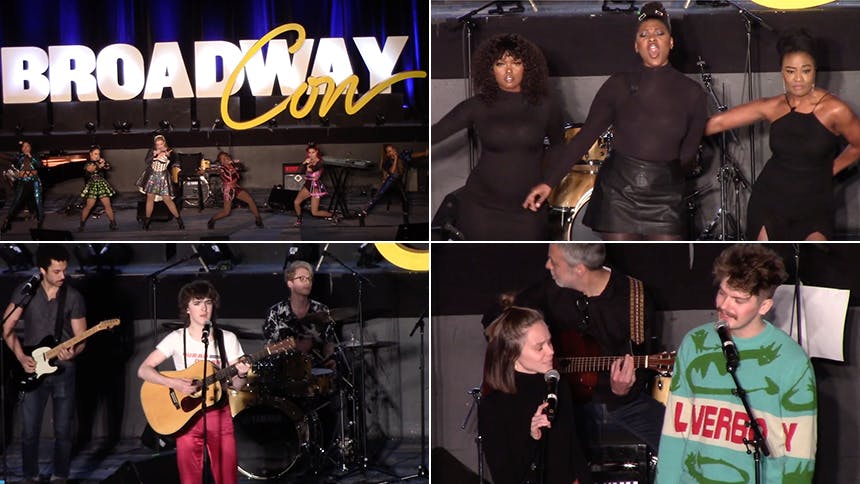 BroadwayCon may be over, but thankfully the videos live on. The Broadway extravaganza is often the first place that the big spring musicals debut their showstopping numbers, and this year was no exception. Scroll on for a look at some of the amazing musical numbers that made BroadwayCon 2020 so memorable.


The queens of Broadway’s Six performed their opening number, and the fans went wild.

“Salty Teardrops” from Caroline, or Change


Together Nasia Thomas, Harper Miles and Nya portray the The Radio girl group in Roundabout’s upcoming revival of Caroline, or Change, and these ladies sang the house down.

“Wake Up” from Jagged Little Pill

“I Want You” from Girl From North Country

“Up” from Sing Street


The cast of Broadway’s Sing Street impressed the crowd with two numbers from the upcoming musical. Look at them all playing their own instruments like it’s no big deal. This song is a true bop.


This second Sing Street song captures all that 1980s teenage angst at the center of the show.


Olivier Award winner Lesli Margherita gave us a peek into the new off-Broadway hit Emojiland, and it’s a place we want to go to live. The vocals, the high kick—it was all there.

“Something to Hold Onto” from Between the Lines


The dreamy Jason Gotay showed off his big, beautiful voice and the score to the upcoming off-Broadway musical Between the Lines. He even powered through a technical difficulty with ease.

“A Whole New Story” from Between the Lines


Aladdin and Wicked alum Arielle Jacobs also performed from Between the Lines, debuting a song young ladies are going to sing at every senior recital for years to come.

“It’s Not About Me” from The Prom

“Mama Will Provide” from Once On This Island


Should be Tony nominee/winner Alex Newell took to the stage to perform the Once On This Island showstopper during a technical difficulty, and it was everything. Brace yourself for 1:40 for the end—Mama definitely provided there.

“Over the Rainbow” from The Wizard of Oz


Queen of vocals, Alysha Umphress performed this gorgeous, jazzy “Somewhere Over the Rainbow” as part of the BroadwayCon cabaret, and we still have chills.

And in case you missed it, here's "You Could Drive a Person Crazy" from the new "Company" revival and two numbers from "Mrs. Doubtfire".